In visual art, a cherub, or more strictly speaking, a putto, is an infant or toddler, almost always male and with wings, found especially in Baroque art. So what are they doing playing trombones in Renaissance and Baroque art? The main reason probably goes to the religious associations of the instrument, the trombone being an instrument that for many years performed primarily in church settings. (For more background on the trombone's religious associations, and for full citations for all of the sources in this article, see Trombone History Timeline. See also Angel Trombonists Throughout History.) Although there are numerous examples of angel-trombonists in art, it is interesting to note just how many depictions feature cherub-trombonists, no less so because the trombone would seem to be a particularly difficult instrument for an infant to play! Below are several such images, along with background information on each.

1516—Freiburg, Germany: Hans Baldung’s painting, Coronation of the Virgin, the central panel of an altarpiece located in the Freiburg Cathedral, includes a cherub-trombonist among a group of angels playing wind instruments above and to the left of the Virgin. The other instruments being played in the wind instrument group appear to be crumhorn and either shawm or cornetto (see detail below; public domain) (Burkhard pl. 2).

c. 1557—Murano, Italy: Paolo Caliari (also called Veronese) paints The Seven Planetary Gods on the ceiling of the first floor of Palazzo Trevisan. The fresco, which includes a cherub or putto playing trombone, is later transferred to canvas and housed in the Louvre, Paris (see middle-right of below image; public domain).

1578—Antwerp, Belgium: A set of masses by George de La Hele includes an image, a large initial D in front of a group of cherub musicians, that features a rear-facing trombone being played by a cherub (also rear-facing). Most of them perform from a central partbook (see below image; public domain; Wangermée vol. 1 167).

1611—Pieter de Witte (also known as Peter Candid) includes a cherub playing trombone in his drawing, Euterpe. Resting in front of the cherub-trombonist is a shawm, and the instruments being played on the other side of the image are transverse flute and cornetto (see below detail; public domain) (Volk-Knüttel 102).

c. 1620-24—Seville, Spain: The altarpiece of the Virgin of the Rosary of the Parish of Santa Ana, probably painted by Diego López Bueno and Miguel Cano, includes a depiction of a cherub playing trombone (see bottom-right of below image; public domain) (Alonso Cano 613).

c. 1629—Venice, Italy: Veronese artist Fra Semplice da Verona includes a depiction of a cherub playing trombone in Infant Jesus and Musical Angels, an image framing a pre-existing Madonna in the Convento del Redentore (see below detail; public domain) (Portogruaro, plate 37). Other instruments being played (but not shown in the detail below) include cornetto, viol, violin, and lute.

1658—Schöningen, Germany: Jonas Weigel completes the organ for St. Vincenzkirche, which includes a sculpture of an cherub-trombonist on the organ case (see below detail; public domain). The cherub-musician on the opposite side, not shown, plays the cornetto.

1689—Seville, Spain: The church of the Hospital de los Venerables Sacerdotes, with walls and ceiling painted by Juan Valdés and his son Lucas Valdés, is completed. Among the numerous instrument-playing cherubs depicted on the ceiling is a cherub playing the trombone (see detail below; public domain). 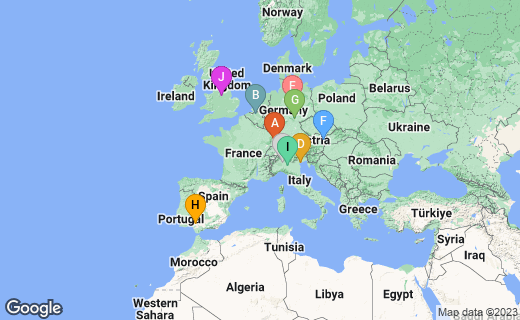