Walt Disney Productions released the original version of Tron on July 9, 1982, although production on the film apparently began years before that. It featured a line up with names you will recognize, including Jeff Bridges, Bruce Boxleitner, Roger Allers, Billy Crystal and Harrison Ellenshaw.

Critics enjoyed the movie particularly the cinematography and the acting, but not the plot. It was a box office success because of the special effects, which were very advanced for the 1980s, and eventually, it won an Academy Award for Technical Achievement.

Today, Tron Classic has a cult-like following. A number of video games, comic books and even an animated television series followed the release of the movie and, most recently, Disney released a movie sequel, Tron: Legacy in 2010.

This page is about the first Tron movie, and I am pleased to say that I have finally watched it. For whatever reason, Disney did not re-release this movie in anticipation of 2010s new Tron movie, TRON: LEGACY. This meant that the pricing on existing DVD and even VHS copies had skyrocketed. However, Disney did release THE FIRST TRON MOVIE on DVD and blu-ray after Tron Legacy was released.

On this page, learn more about the 1982 version of Tron, watch the original movie trailer, read some professional and non-professional movie reviews and even discover a few sources to buy your very own copy of Tron, which I am glad to say, is now widely available on DVD and blu-ray disc.

Click here to order your copy of the original, 1982 Tron movie from Amazon.

"Tron offers sights that no eye, no camera, has ever before beheld."

Disney is calling the first Tron movie Tron Classic and I am pleased to say we watched it last night and enjoyed it. It was not as dated as I expected it to be and was still, at times, impressive, visually. Do not get me wrong, it definitely had some dated moments -- like when you first see the characters in their white suits; some of the shots of the 'ships;' the 1980s clothes, glasses and hair; and I even thought the music was dated. However, it was still quite enjoyable although I could not help but think that this is a case where it would have been preferable to see the FIRST movie before the SECOND one.

Disney used a lot of state-of-the-art graphics and techniques to create this movie and it was definitely a milestone in the entertainment movie and a landmark in terms of special effects. Now, it is a cult favourite and one you should watch if you enjoy science fiction films.

"When Tron came out in 1982, it was intended to be a visually stunning parable against the powers of computers and technology. More than twenty years later, the movie plays more like a nostalgic ode to the early 1980s, than a simple good vs. evil morality tale. Tron evokes the heady days when video games like Pac Man, Defender and Centipede ruled the arcades and when everyone owned a Commodore 64 or an Atari 2600 -- the eight track of personal computing." ~ Cubist

Order Your Copy of Tron From Amazon

Order your copy of Tron on DVD or blu-ray disc. Disney re-released the original Tron movie (now known as Tron Classic) on April 5, 2011.

Click here to order your copy of the original, 1982 Tron movie from Amazon. 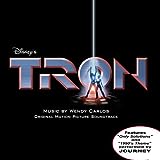 "Those fond of Wendy Carlos' solo work and collaboration with Kubrick on Orange (and The Shining) will find familiar charms in "Water, Music, and TRONaction," "TRONscherzo" and "Theme from TRON." But Journey's "Only Solutions" and now all-too-ironic "1990's Theme" further fix the score firmly in the '80s. This debut CD-release of the score also features three bonus tracks, the original "TRONaction" and two other unused cues, including a solo synth rendition of the film's anthem." - Jerry McCulley