Am I raising a spoiled child?

What is the behavior of a spoiled child?

What is a spoiled child? A spoiled child is one who is manipulative, undisciplined and just plain unpleasant to be around. Have you ever gone out to dinner fully expecting to enjoy a relaxing, delicious meal with interesting conversation? Of course you have. Well, five minutes later, after studying the menu and making your selection, you notice an increase in noise level. You look around and locate the cause of the disruption and realize its all centered at a table with three people seated at it. There they are two adults and one pint size person who is building herself up to causing a great big scene. It turns out the child wants dessert and no meal. The mother and father are quietly trying to persuade the little one to eat real food first and she is having none of it. As their voices become more hushed and pleading the little girls is becoming louder and more shrill. Who do you think wins? You got it. The parents give in and order a large sundae for the child and furitively look around to see who is noticing. By now your dream of a nice relaxing dinner has left you, you know its only going to get worse. Your sitting there invisioning yourself snatching the child up and swatting her on the bottom. But wait a minute. Is it really her fault? Maybe the parents are the one's who need the swat.

Parents are the one's who are untimately responsible for the behavior of the child. I know, we can't control everything but we can certainly start them off in the right direction. Many people feel that decsipline should begin when they are babies and that their behavior is set by the time they turn two or three. So, what are the behaviors of a spoiled child? There are several tell-tale signs that the child is spoiled.

*They don't respect other peoples rights. To them the only person who matters is themselves. What they want is what they get and they want it immediately.

*They will argue or protest anything you say that does not go along with what they want at the moment.

*They try to control or manipulate people to get what they want.

*They frequently throw temper tantrums. This is the behavior that opened my eyes. One day I was shopping in a toy store with my three children (This was more years ago than I care to remember) and my middle child decided she wanted something that cost more than I was willing to spend. When she finally realized she was not going to get the toy of her choice she proceeded to throw herself down on the floor kicking and screaming. I took the hands of my two other children and walked around the corner standing where I could peek through a display of toys so I could keep an eye on her. When she realize we were not standing in the aisle watching she picked herself up and stopped screaming. I bought her sisters their toy of choice and she did not get one. I never had a problem after that with listening to the word no when it came to shopping.

*These children also have a low tolerance for frustration. Afterall, if you were used to getting everything you wanted you would have a low frustration level too.

*These children have also learned that a little bit of whinning goes a long way. To me there is nothing worse than a whining child following you around. Many parents give in just to make it stop.

*This last sign of a spoiled child is very telling. These children complain about being bored. They are so used to being entertained that they have no idea of how to entertain themselves.

Believe me, I am far from a perfect parent (is there such a thing?). However, people did not cringe when they saw me coming with my children in tow. I know only too well how much easier it is when they are small to just give in instead of having to endure the crying and whining. Believe me, all the hard work will be worth it as they get older. You will have a pleasant, caring child who is a pleasure to be around. Later we will discuss how to unspoil the child. 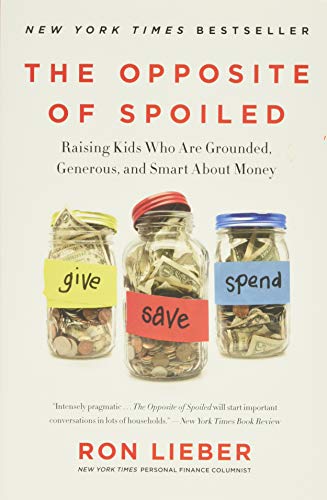 The Opposite of Spoiled: Raising Kids Who Are Grounded, Generous, and Smart About Money
Buy Now