All About Tea: The History of Tea and Other Fun Facts

For All the Tea in China: How England Stole the World's Favorite Drink and Changed History
Buy Now

Why I wrote about the history of tea:

Ah, tea...that magical elixir that helps me unwind and whispers, "all's right with the world." What would I do without it? Tea has been a part of my family history since I was five and would sneak sips from my grandmother's cup. Later, it was a right of passage learning to drink it the way my boyfriend did: plain, no milk, no sugar, just a touch of honey.

My fascination with the origins of tea was fairly recent. Previously, I had not given it much thought. But, taking an online writing course seven years ago pushed the creative envelope into all sorts of directions and led to a one way door into the world of curiosity.

This hub is in response to two of the questions I've had: "Where did tea begin and how did it arrive in America?"

A Brief History of Tea

2737 BC-China: The Emperor of China, Shen Nong, sat discovers ‘tea’ when the wind blew some leaves into his cup and instead of discarding it he sipped it and found it rejuvenating and refreshing.

59 BC-China: Wang Bao writes the first book about tea preparation called, A Contract with a Servant.

520 AD-India: Bodhidharma, the monk who was the founder of Zen Buddhism, travelled to China. Legend states he chewed on leaves of a tree to help him stay awake while meditating and discovered tea leaves.

780 AD-China-Lu Yu, scholar and researcher of tea for 20 years writes a book called, Cha Jing, (also known as Cha Ching), which details all aspects of tea from planting to preparation.

805 AD-Japan: Zen priest, Saicho, travels to China and returns with tea seeds offering them to the emperor.

900 AD-Japan: Eisai, a Zen priest and considered to be the ‘Father of Tea’ in Japan, brought back tea seeds from China to Kyoto and offered them to priests.

1211-Japan: Eisai writes, How to stay healthy by drinking tea. In 1214 he sent a copy to the Shogun Minamoto because of his heavy drinking. Tea is soon part of the samurai warriors’ daily routine.

1400’s-Japan: the Japanese Tea Ceremony, Chanoyu, develops as part of the Japanese spiritual path. The four areas of focus, incorporated through tea drinking and daily life, are: harmony, respect, purity, and tranquility.

1600’s-Netherlands: the Dutch have embarked on trade with Portugal and tea is initially used solely by the wealthy until it saturates the market and the common man can also consume it. The first tea is served in a public restaurant.

1652-England is introduced to tea and by 1669 it becomes the most important trade commodity from China. Initially, it is too expensive for anyone but the aristocrats, but all classes soon enjoy it.

1800’s-England: Anna, Duchess of Bedford, introduces the ‘afternoon tea’. This is the ‘meal’ between lunch and dinner to hold one over. It becomes very popular and tea gardens eventually open as a place of social gathering.

2009 statistics: most tea consumed per person

Worldwide, who grows, and who drinks, the most tea?

Tea is grown and processed in many countries around the world. The four leading countries of tea production are China, India, Kenya, and Sri Lanka. Tea consumption in the world is also interesting to look at. Among a total of 155 countries studied, the number one tea consumer is the United Arab Emirates, followed by Morocco and third, Ireland. The United Kingdom is number seven, and the U.S. is 69th.

Who grows the most tea in the world: 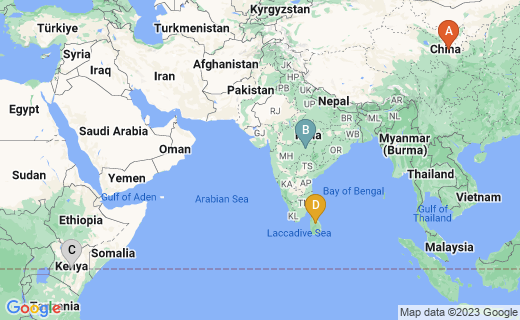 Unwind with a cup of tea in the afternoon

Types of tea and what affects the flavor:

The question often arises, “What is the difference between the types of tea?” It is easy to understand the confusion because there are so many types available and a consumer may wonder if it is all a marketing strategy…like promoting the ‘bigger is better’ motto.

However, let me assure you that there is a real difference between black, green, oolong, and white tea. The differences are in way of processing and time of harvesting. First, tea leaves come from the same plant: the Camellia sinensis. Herbal teas are not included here because they are not really from tea leaves, but herb mixtures of flowers and spices.

White is the most tender. The tea leaves are picked as new leaves and buds, steamed to stop the oxidation process and then dried. Because of the lack of chlorophyll in the leaves they are silvery white. They are the least mature of the tea leaves that are offered.

Black tea leaves are oxidized or fermented and then dried-the the longer the processing the darker the leaves. Darjeeling is an unblended black tea. English Breakfast and Earl Grey are blended black tea.

Green tea leaves are steamed and scalded and then rolled and dried. Green tea is touted as having the most health benefits because they have a minimum of oxidation, which maintains the flavonoid content.

Yellow tea is processed much the same way as green tea; however, the drying phase is much slower. The leaves are actually left to dry in a damp state where they wither and yellow. This creates a milder flavor and removes the ‘grassy’ taste that green tea has.

Oolong tea has the least amount of oxidation time of black tea before it is dried. It is allowed to wither before it is curled and twisted.

In addition to the harvesting and oxidation process that affects the flavor of tea leaves, weather and soil conditions will also influence the final outcome. 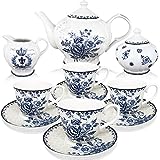 How to make a great cup of tea

What type of tea you are drinking will matter in the process of steeping your tea. Here are some steps to keep in mind:

1. Use a clean tea pot and warm the inside with hot water before pouring the boiling water in.

2. Boil the water to the tea's proper temperature.

3. Pour the enough water for how many cups you are making, plus one additional cup.

4. Add the number of tea bags according to how many cups you are making, plus one extra.

5. Allow the tea to steep for the number of minutes recommended for that variety.

6. Pour the tea into the cups.

7. Offer milk or cream and sugar, honey or lemon.

From Clipper Tea: How to make a perfect cup of tea:

Did you learn anything new about tea?