Today is the story of the delicious refreshing and healthy drink, Ghirardelli Hot Cocoa. Ghirardelli went to America seeking for gold metal and when he did not find it, he turned cocoa beans into gold through his company that manufactured chocolate.

Hot cocoa (also known as hot chocolate) is a hot beverage typically consisting of chocolate chips or cocoa powder, heated milk or water, and sugar. It is a fatty drink that is calorie dense. You have to save some calories from other junk food to drink hot cocoa.

Flavone-rich cocoa beverage was found to improve blood flow and function of the cells lining blood vessels (endothelial cells), it also helps vessels dilate and keep platelets from clustering on the inside of the blood vessel walls, it is thought that this effect may be attributed to anti-oxidant effect that protects from free radicals.

These later results were found by the American National Institute of health, and by Dr. N.K.Hollenberg, professor of medicine at Harvard Medical School.

Drinking too much hot cocoa bears the risk of obesity and dental problems, due to high content of sugar and fat.

Ghirardelli was founded by the Italian immigrant Domingo Ghirardelli at 1852 in San Francisco.

Among other lines of products the company produces hot cocoas, which are created by a precise blend of deep-roasted cocoa beans and hand-selected ingredients. They combine cocoa, sugar, sweetened chocolate, and real vanilla to create their characteristic taste.

The procedures that are declared by the company involve:
- Selection of the highest quality beans that produce fairly uniform-in-size nibs
- Different roasting process whereby the shell is removed first ( techniques that depend on roasting the beans before removing the shell, requires over-roasting the outside portion of the bean in order to roast the inside, this could impart a burned flavor to the produced chocolate)
- An intensive refining process to ensure that its chocolate truly melts in mouth. It has no grainy feel because most of their chocolate flakes are refined until they are 19 microns ( human hair is 100 microns)

Their hot cocoa products include :

To feel free to make your favored taste and mix, here are some recipes that were brought to you from ghirardelli.com 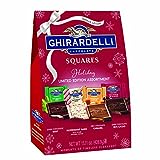 In saucepan over low heat, bring chocolate and half-and-half to simmer, whisking constantly. Simmer 1 minute or until mixture thickens slightly. Remove from heat; whisk in liqueur and vanilla.

Tip: Instead of amaretto, use 1 tablespoon hazelnut, coffee or orange liqueur or peppermint schnapps, or 1/2 teaspoon almond or peppermint extract.

Combine the milk, water, and sugar in a saucepan over medium heat and bring just to a boil, stirring. Immediately remove from the heat and with an immersion blender, carefully puree until thickened.

Chop the chocolate into 1-inch pieces and place in a bowl. Pour the milk mixture over the chocolate and let it rest for 2 minutes. Whisk or stir until the mixture is smooth and the chocolate has dissolved. Cover and chill in the refrigerator for 1 hour.

Directions
This recipe was developed for Ghirardelli by Elizabeth Falkner.

Combine the ganache, coconut milk, rum syrup, and ice in a blender and puree until smooth, about 1 minute. Pour into two glasses and sprinkle each with almonds.

Directions
This recipe was developed for Ghirardelli by Elizabeth Falkner. Rum syrup, a flavored syrup used in coffees, drinks, and baked goods, can be found at most grocery or specialty food outlets. Serve with a biscotti.

In a small bowl, mix the mascarpone cheese and white chips. Set aside in refrigerator for about 20 minutes.


Directions
This recipe was developed for Ghirardelli by Elizabeth Falkner.

Combine the raspberry syrup, ice cream, milk, and ice in a blender and puree until smooth, about 1 minute.

In the bottom of each glass, spoon in 2 tablespoons ganache mixture. Pour the raspberry milkshake on top. Garnish each glass with a dark chocolate square.