I do realize that I am digressing from the theme of strictly New Mexican foods here lately. I do this because of all of the lovely autumn vegetables that are arriving daily at the vegetable and fruit market. However, these vegetables are served in New Mexican homes. Root vegetables are eaten in Mexico too.

So, this is not too much of a digression!

This ginger parsnip and potato recipe is one that I adapted from my mom’s recipe. She loved parsnips. She took the cooked parsnip for a spin around her cast iron skillet with a bit of Maple syrup and butter. This enhanced the parsnip flavor and made me a believer that parsnips did taste good!

The humble parsnip (Pastinaca sativa) is a root vegetable closely related to the carrot. Indeed, carrots come in more colors than the orange we are use to seeing in the grocery store.

The parsnip’s taste hints of more exotic flavors (for a vegetable) like butterscotch, honey, and cardamom. So, it doesn't take much nudging from our spice selection and cooking imaginations to showcase the humble parsnip.

The parsnip may be eaten raw, boiled, steamed, and baked. It is a lovely addition cooked with a pork roast as well as a beef roast. Many soups acquire a deep complex flavor with the addition of parsnips. Parsnips are best harvested and eaten after a frost. The frost brings out the sweetness of the parsnips.

I find the fact that parsnips are best eaten after a frost interesting since all notations on the parsnip says it originated from the Mediterranean region and the Roman Empire took the parsnip to other areas of Europe. There isn't much frost in Italy!

When buying a parsnip look for a firm white parsnip. It should not be spongy. The parsnip should not be bendable! Do not buy one that has been coated in wax. The wax is a preservation method only. The wax needs paring off and this removes much of the skin. The skin has lots of taste and I do not like peeled parsnips as much as just scrubbed parsnips. Many vitamins and minerals are in the peel too.

Here is a recipe that celebrates the unique qualities of parsnips and pairs them with the healthy potato.

Ingredients for Parsnips and Potatoes Recipe

1 T. of candied ginger (more if you prefer)

Preparation for Parsnips and Potatoes Recipe

Scrup with water and remove the tops of the parsnips, pare off any ‘bad’ spots

Scrub with water the potato and pare off any ‘bad spots’

Leave the skins on both the parsnip and potato

Thin slice the parsnips and potatoes

Steam them until they may be pierced by a fork but not mushy!

While the parsnips and potatoes are steaming

Saute the chopped ginger, butter, and Agave sweetener together

Turn off stove top heat and let the mixture rest, as this creates a ginger and Agave flavored butter.

Drain the parsnips and potatoes and toss with the ginger/Agave butter.

I serve this the first night as the starchy side dish.

If there are leftovers I use them in soups. They may also be frozen for later use in soups and that includes bean soup as well as minestrone and vegetable soups!

Yogurt Topping Base for Salmon Patties 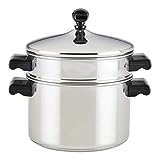