Ever since the end of World War II, America has been gadget happy. Japan, China, and other Asian nations became adept at developing gadgets of all kinds in this post-war era, but they had always been inventors.

America needed suddenly to save time or "make time" as some people said. The notion became their motto: Make Time! State fairs and Walt Disney TV shows began to feature gadetry and inventions in increasing numbers, ushering in the time savings phenomenon to the American housewife and the foundations of surviving on US Space Program missions. At Wright Patterson AFB Museum, you can still look at the wind-up shaver that astronauts of Mercury and Gemini used.

The rush to gadgetry was good for American life during the Cold War.

However, all the women that went to the factories when the men went to war did not return to the home fires. Some of them stayed at work and two-income families REALLY needed to save time in household duties. Thus, the rush to gadgetry was good for American life during the Cold War. These gadgets began to show up on display in state fairs and world exhibitions across the US, and some fairs added a model all-electric house of the future.

By the 1980s, there was a separate gadget or cooking device on the market for every type of food.

Alton Brown of Good Eats and Iron Chef America still recommends muti-use tools, though, to save money and end clutter. 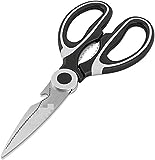 The concept of an all-electric house was developed back in the silent film era after the Chicago and St. Louis World's Fairs displayed uses for electricity.

The Electric House is a 1920-1922 (two versions) comedy short starring Buster Keaton. He portrays a botany student mistakenly given a degree in electrical engineering.

On the job, he wires a home by using an abundance of gadgets, but someone else cross wires them and mayhem results. Real mayhem resulted in an electric staircase injuring the star of the show.

The proliferation of televisions in American households and the initial sponsorship of "soap operas" on TV by detergent companies in the late 1940s and early 1950s led the way to 20th Century infomercials that hawked gadgets of all kinds for the home, garage, and garden. The long-running TV show Saturday night Live began to feature tongue-in-cheek infomercials of their own in the early 1970s and sometimes it was hard to tell if the gadgets were real or parody.

One handy real gadget for the kitchen is the bright yellow polypropylene banana slicer. You just set it in place atop a peeled banana and push it through with consistent, even pressure to slice the fruit all at once. The result is a set of 1/4″ thick slices for cereal, sundaes, or fruit salads without messy hands. Our local stores are nearly always sold out of this item. This slicer is available on Amazon.com as well as Solutions company, or at your local home and garden store for about $4.00. Lightweight, it makes 18 slices with a safe cutting edge that will not injure fingers and is fully washable in the dishwasher. 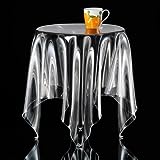 This looks like a transparent tablecloth, but it stand up all by itself for a lovely addition to the dining area of your home.

This device is built of study transparent acrylic and known as the Essey Illusion Table, with a larger version called Grand Illusion. When you first enter the room containing this table, you might think it is a floating tablecloth.

The hanging "corners" of the solid tablecloth support the entire structure in order to keep the table standing. Under dimmed lights, it is especially intriguing and beautiful for candlelight dinners and holidays. Colors include all of Transparent, Matt Ice, Grey, Brown, and Pearl at ESSEY.COM.

Each table is only 3mm thick and hand made in Denmark, with each number actually slightly different in its folds, so these can become inexpensive collectors' pieces. The Essey tables were named Best New Product at Top Drawer in London for 2007.

Room dividers have been a type of gadget that becomes popular in nearly every decade. Decorating fads have included bead-work dividers, walls of pole lamps, walls of tall plants, and several others. In the 1950s, an additional kitchen counter became a room divider at which the family could eat snacks. An alternative was to have a wall with a pass-through window for serving platters of food to the dining room.

This unique first offering in her line is entitled Americana and has been on display in exhibition at the Ohio State University's Wexner Center Gallery in Columbus, Ohio.

This fine art piece is 60 feet long, constructed of wood paneling imprinted with a series of forest images such as deer, log cabins, fences, birds and other rural features. The imprints are Victorian wallpaper images that Rain Harris carved into the wood surfaces with a router. The wood is inlaid with a paint that is a powdery blue, accenting the image patterns and the cut and carved scenes.

Rain Harris can be found at creating other works in other media, including clay and porcelain at The Clay Studio.