Multimillion-dollar research is improving pear production and flavors without resorting to GMO. The pear is becoming the new star of the farmers market and the home kitchen!

How to Study a Pear

The commercial apple and pear growers of Washington State in 2011 provided Washington State University (WSU) with a sum of $27,000,000 over the following 8 years to 2019 for research about pear and apple tree diseases and fruit production.This is an important grant made by commercial interests. The grant funds the search for better, tastier pears that have high nutritional value as well as high yield per tree.

However, the gift is based on a dedicated Fruit Tax, so the cost is passed on to consumers. But it's just $1.00 per ton and the voters elected to tax themselves to help WSU to produce better and more fruit, along with sustainable packaging.

The research positions and orchard research could increase production and lower disease risk to enhance Washington apples and pears. In Ohio, a line of four apple trees on our block near the street, shared by neighbors, did not even produce blossoms this year in extended heat wave and lack of rain. It was quite a loss and apples at the grocery are cost $1.00 per pound more than they did a year ago in 2010. If the new researchers in Washington can develop a cure for this, we'd appreciate it.

Pear Festivals On the West Coast

With four major pear growing regions, Washington State produces a lot of pears and donates considerable funding to state fruit research. However, the state has no pear festivals of its own. At least one is held in Oregon to the south, but California holds at least three pear festivals.

For fun pear events, we must travel to California's State Capital Area, Sacramento. In this region, two festivals of the pear are celebrated - one in the summer in Courtland to the south and one in the autumn in Kelseyville to the west (see the map below).

Both festivals are much like state or county fairs that center around the local varieties of pears grown. They feature Pear Queens, parades, races, car shows, cooking contests, family activities, music, fine arts, crafts, duck calling, canning demonstrations, sampling of a wide variety of pears and pear products, and many other offerings. They are awesome!

A Capital Pear Fair or Two! 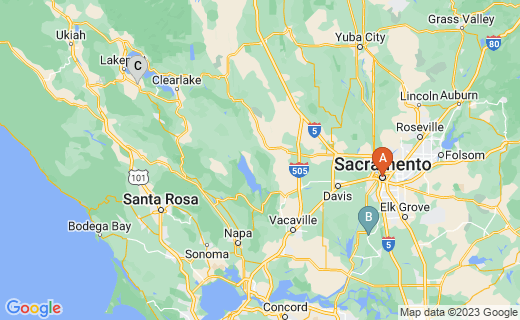 A Pumpkin In a Pear Tree

A pear tree in Iowa near Des Moines seemed to give birth to a pumpkin during the autumn of 2011. How did this event occur?

A pumpkin vine climbed up the pear tree and out along a branch to produce a blossom. The blossom became a pumpkin hanging among the pears on Labor Day. The odd sighting is still a great conversation starter today.

5 stars from 1 rating of Pear Pie with Asiago Cheese

I like a delicate flavor in a pear pie and don't add apples, because of their apply sweetness or tartness. Two or three types of apples in a single pie can be very good tasting, though - one sweet and one tart is a favorite.

This recipe is one of thinly sliced fresh pears , a ginger-cinnamon seasoning, and a delicate shredded or grated Asiago cheese on the top lattice crust . Some nuts can be added to enhance the nutty flavor of the cheese - slivered almonds or a few English walnuts (Black walnuts may or may not be too strong for your taste in this pie). Enjoy!