This incredibly simple yet delicious sandwich recipe is perfect for preparing for perhaps guests arriving. Expecting company to watch the big game? Prepare this in advance and then simply slice it up and serve when required. The beautifully fresh vegetables, slow roasted in olive oil and then stuffed in to oven fresh bread is a celebration and explosion of the veritable tastes of summer.

1 large onion cob or other round loaf

It is important here to essentially steep the aubergine and courgette in salt for around half an hour, in a colander over a bowl as shown, prior to beginning the roasting process. This is to allow the excess water to drain away. Otherwise, the vegetables will start to steam/poach to some extent, rather than roast in the oil, and spoil the final effect to some extent. They should be chopped in to approximately 1" cubes prior to this process being started.

The red onion should be quartered and then the layers split as shown and the garlic should be roughly chopped.

The vegetables should be placed on a large baking tray, seasoned with salt and pepper and drizzled liberally with olive oil. They should then be placed in to an oven pre-heated to 400F/200C for around 45 minutes. It is a good idea to stir them around halfway through the cooking process.

It is important for this recipe that the buffalo Mozzarella cheese be bought fresh and not processed. It is usually sold in packages or tubs of water, in balls of around four or five ounces. Two packages/tubs are required for this recipe. 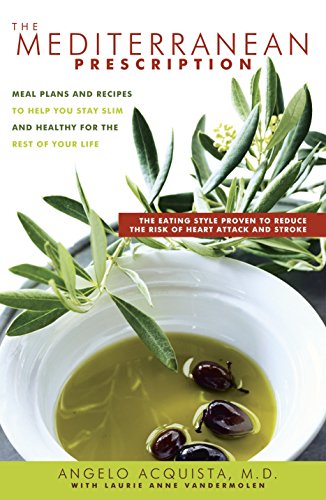 The Mediterranean Prescription: Meal Plans and Recipes to Help You Stay Slim and Healthy for the Rest of Your Life
Buy Now

The book featured to the right features a great many delicious recipes of Mediterranean origin, which can help anyone to improve their diet and enjoy a lot of the wonderful Mediterranean produce to the full.

Preparing and Stuffing the Onion Cob

When the vegetables are cooked, they should be removed from the oven and left to cool for around half an hour, prior to being stuffed in to the cob.

The cob should be prepared in the first instance by slicing off the top as shown. The soft inside of the loaf should then be carefully plucked out by hand, leaving a thickness of slightly less than in inch on the base and all the way around. The removed bread can be used for breadcrumbs - or is absolutely perfect for wiping in the vegetable and oil juices of the baking tray, once the vegetables have been removed and eaten as an impromptu snack!

The balls of mozzarella cheese should then be roughly broken up in to small pieces and mixed through the partially cooled vegetables along with the roughly torn basil leaves, before the mixture is used to stuff the cob.

It is important when stuffing the cob to pack the vegetables and Mozzarella in reasonably tightly but not so tightly that the bread is likely to burst or lose its shape.

Press the Cob for a Couple of Hours

When the cob has been stuffed, the lid should be placed on and it should be wrapped in clingfilm. It should then be placed in a bowl and a dinner plate placed on top. A couple of cans of soup or the likes should then be used to weight the plate down and the bowl should be placed in the refrigerator for at least a couple of hours. This will make for much greater presentation of the vegetable slice, as well as allowing the flavours of the vegetables and basil to infuse in to the Mozzarella cheese.