Merlix is a rare and powerful addition to the super assault bakugan. He is a dice thrower, and can change G-power, although in the show Merlix is considered an attribute changing bakugan. It is a humanoid bakugan, with two huge arms that come out. Also, there is a large chest plate on the bakugan below the head, which gives it a strong appearance. The G-power depends on the attribute. For example, the Darkus version's G Power levels are 750, 700, 700, 650, 600, 550, and the Pyrus's are 750, 700, 680, 600, 580, and 550. The Pyrus version is found in the battle pack, so it is medium-rare. An Aquos Merlix is going to be released in Wave 4 with a highest G power as 950 on the die. The Subterra version has 750, 700, 680, 600, 580G's. In one episode, Merlix battled against Dragonoid, and was very close to succeeding. Its ability “Doom Cube” decreased Drago’s power level down to 0, proving it is an efficient offensive bakugan. At the end however Dragonoid was victorious. Merlix holds a translucent dice that is rolled onto the field when the bakugan is opened, landing on a G-power. That level of power is consistent throughout the round, unless abilities are played. 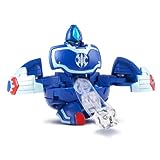 Chance Dragonoid is a very popular and powerful bakugan. It is a dice thrower bakugan, which means the G-power depends on a 6-sided die. In ball form, Chance Dragonoid has the basic form of Dragonoid bakugan, but the look of the head and wings is totally different. The head is large and has a huge mouth for holding the die. It has sharp teeth, and two forward-facing horns that are supposed to be opened physically. The wings are oddly shaped, and there are two fang-like objects that come out when opened. Chance Dragonoid functions differently from Mystic Elico. Instead, when the bakugan is opened, a die falls out of the mouth and rolls on the ground. The G-power depends on the number facing up when the die stops rolling. After this, the die can be taken away or fitted back into the Bakugan’s mouth. This G-power will be Chance Dragonoid’s base power level for the round, but will change after the round is over and it is put into battle again later.

Mystic Chancer is a bakugan that looks a lot like Merlix. It has two arms that face the same way, and the face-upper body is folded the same way. It also looks like Mystic Elico, and the only real differences are the facial features. The dice is present as well, and determines G-power. In bakugan dimensions, Chancer looks like a human with a long glowing lightning weapon. He also has a tail. Some of the attributes it comes in are Darkus, Haos, and Subterra. It was also featured on some ability cards like “Mystic Chancer”. This allows the player with Mystic Chancer to re-roll the die, making it swap attributes. Also, the G-powers are swapped from the opponent. This ability is very effective when the G-power of the opponent is very high. Mystic Chancer was released with Splight, Merlix, Raptorix, and Glotronoid according to Bakugan Wiki. Therefore, it isn’t considered new. I don’t think the G-power is high, because there is a 50% chance of getting 300, 400, or 450G's, and a 50% chance of getting 500, 750, or 850G's. Overall, I think both Merlix and Mystic Chancer are worth getting, but I would recommend Merlix more because of the G-power differences and the look of the bakugan.