Raptorix is a strange bird-dragon like bakugan that is similar to Farakspin. He stands on two legs like human, and his body is slim but appears sturdy. His upper arms are rather long and connect to broad shoulders, similar to Ingram’s. Raptorix’ wings are composed of three long leaf-like armors and face upward in an unusual position. His back supports two claws that stick out and are used for some attacks. The head is connected to a multi jointed neck, like the mechanical one of Altair. The head alone is small compared to the body, with a weak beak and two horns. 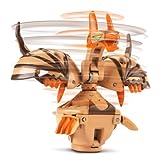 Raptorix isn’t really a major bakugan, so its battle tactics are quite unknown. It uses the attribute of Ventus, so it mainly relies on wind or blasts, etc. to weaken the enemy for a final attack. Raptorix has a high defense level like Farakspin, and can endure attacks for a long time. The first ever real battle for Raptorix is in episode 4, where it was defeated in battle against Mason. Swarms of them are often seen helping defending Neathian towers.

Raptorix has a G-power ranging from 750-830G's, the highest being Haos. Like Farakspin, Raptorix comes in all attributes, but special colors aren’t present. It is a common bakugan that was released with other super assault bakugans: Splight, Merlix, Mystic Chancer, and Glotronoid.

Raptorix was also seen in episode 1, 8, 14 and 15. His abilities are Gale Storm and Hyat Spinner. Raptorix also spins like Farakspin so he is a bakucyclone

Farakspin is a mutated fly-like bakugan that will shoot a special ray to damage the enemy. His G power in the anime is unknown, since it has never gone to battle inside a bakugan stadium, where bakugan are scanned for G-power. Farakspin is a super assault bakugan with the ability to spin when opened. This is controlled by a loose gear that allows the upper body to rotate. Also, two movable fins on each side of its body thrusts the wings outward, causing it to spin. Like Raptorix, he has no pegs for battle gear; and when in ball form, he has 5 eyeball details with holes through them. He comes in all attributes, but currently there are no special colors such as translucent or clear. He was seen in episode 52, 5, 14, 23 and 30. Ours however, strangely does not have any printed G-power. The normal G-power for Farakspin is usually between 700 and 750G's. The DNA code is located on its left wing. Farakspin’s battle tactics mainly include using wind to blow away it’s opponent. Therefore, its defence is better than its attack power. He can dodge quickly to avoid attacks, which is essential since it has poor armor.

There are two ability cards for Farakspin: Hyat Spinner and Gale Storm