The teddy bear has a long history in the United States. Its manufacture was inspired by a hunting trip taken by President Theodore Roosevelt in 1902, in which a battered black bear was shot in order to put it out of its misery. The story was sensationalized by cartoonists, who made the bear smaller and friendlier. Morris Michtom, who owned a candy store in Brooklyn, created a stuffed bear with the help of his wife and placed it in his story window. He dubbed the plush bear “Teddy’s bear,” based on the President’s nickname, Teddy. The teddy bears were a huge success and allowed Michtom to start the Ideal Novelty and Toy Company, which is still in existence today.

For decades, a stuffed teddy bear was an integral part of childhood. Practically every baby and toddler had one – both girls and boys. Later, when kids had access to more sophisticated toys, the teddy bear was cast aside for awhile. In the seventies, however, the teddy bear came back with a vengeance! Many adults began to collect teddy bears as part of their “country home” décor. In fact, my mom collected and made teddy bears for years.

Today, teddy bears are popular again with kids. Older girls and teen girls have also always liked the cuddly teddy bears, and in fact, lots of teenage girls receive a teddy bear as a gift from their boyfriend. There’s just something adorable about these whimsical bears! And most of them are soft and snugly, so they make great bed fellows. They also look great perched on a shelf in a child’s room or in a nursery. The bow around the neck of the teddy bear can be changed to match any room décor.

Teddy bears come in a wide range of colors and sizes, and some are dressed in cute outfits. Themed bears are also available. Cuddling a teddy bear gives children the chance to develop nurturing skills, which according to experts, little boys sometimes lack. Many parents don’t like the idea of their sons playing with baby dolls, but they have no problem with the toddler boys playing with a stuffed teddy bear.

Teddy bears make great birthday gifts, Christmas gifts, baby shower gifts, and Valentine’s Day gifts. Most any toddler would love receiving a teddy bear, as would just about any female, regardless of age!

If you’re thinking about buying a teddy bear, check out the selection below. Included are teddy bears for babies, military teddy bears, giant teddy bears, and Christmas bears. It’s super easy to buy teddy bears online while shopping from your computer chair!

For more great gift ideas for kids, click the links below the teddy bears! Thanks for looking!

More about toys for kids: 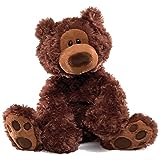