In 2012 Marvel release a new Spiderman film, this comes out in July and is going to be called The Amazing Spiderman. To coincide with the release of this new film Lego are going to be bringing out a Spiderman Lego set under the Superheroes theme. This is not the first time we have seen Spiderman in Lego form, back when the old films came out around 2003/04 there were a few sets released then. So what can we expect from Lego in 2012? Well let’s take a look. 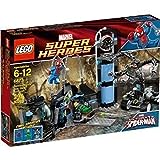 A Closer Look At The Set

Currently there only looks like being one set released in the summer. Lego may bring out more in the near future and if this is the case we will update this page. So the set we are going to be getting is called Spiderman’s Doc Ock Ambush. It has the item number 6873 and we are expecting it to be released sometime in August. Often with sets such as this one the release date does get moved forward so it would be no surprise if we see this one sometime in July when the actual film also comes out.

The new set will consist of 362 pieces which makes it fairly middle of the range size wise. We are told this one will have a price of around $40. If you are interested in Superhero minifigures well you get three with this one, Spiderman, Iron Fist and Doc Ock. The Doc Ock one looks really good with it’s long tentacle like arms and as you would expect the actual Spiderman minifigure is excellent. The main thrust of the build is Doc Ock’s lab. This consists of a row of computers, a glass tower and some other equipment. There is also a little vehicle for Doc Ock.

Along with the set we are also expecting there to be a little comic included which should please Marvel comic book fans. Despite the fact that there is a new movie coming out, the reality is that this set is not really based on the new film. We don’t see Doc Ock in the movie so this one is based more on the Ultimate Spiderman TV series. We are assuming that Lego are releasing this one when they are simply due to the fact that there will be lots of hype surrounding the movie so they can get in on some of that action.

There is speculation that we may still see some Lego sets based on The Amazing Spiderman movie but at the moment these are only rumours. At comic con in July Lego did preview lots of new minifigures and there was no sign of The Lizard so maybe fans will be disappointed and we won't see any sets based on the movie this time around.

More From Lego Superheroes In 2012

Along with the new Spiderman set will we be seeing any more new Superhero Lego sets in 2012. We have already seen four sets based on the Avengers, a set based on Wolverine, a Superman set and of course lots of Batman Lego sets this year. These were released both from the Marvel subtheme and the DC Universe subtheme. So what about later in the year?

Well to be honest there is not that much information out there on other new sets. With the release of The Dark Knight Rises movie there have been plenty of rumours of new Dark Knights sets, but that has still not been confirmed and we are getting ever closer to the release of the movie. There are going to be a few Avengers polybags brought out but these are only small and are more for promotional purposes than anything else.

We are expecting lots of new sets in 2013 of course. There are lots of new super hero films coming out such as Ironman 3, a new Captain America film and a new Thor film. Plus of course we are expecting a second Avengers movie at some point so we could well see more Avengers Lego sets hitting our shops next year.

Away from Superheroes the other major new sets looks like being the Lord Of The Rings. In June there were seven new toys brought out based on LOTR and later in 2012 we should be getting some Hobbit Lego which will coincide with the massive release of Peter Jackson’s long awaited prequel to LOTR. So lot’s to look forward to there. Another interesting piece of news is that we may be seeing the end of Ninjago, after maybe seeing a few last sets early in 2013 it looks as though we will be saying goodbye to Ninjago and hello to another brand new theme.

If you are a fan of Spiderman then you should be quite impressed with this new set. The minifigures alone make this one very desirable and when it gets released we are expecting it to sell very well. Although there is currently nothing confirmed it would be no great surprise if we do see some more toys based on Spiderman in the very near future. We will as always keep you posted on any possible future developments.