Since the early 80's when they were first released, Transformer toys have captured the imaginations of little kids and grown up kids. There have been hundreds of different toys released, an animated series, an animated movie spin-off and a trio of live action movie spin-offs. With every new incarnation on the small screen or big screen, there have been new toy releases, even before the revamped and rebooted films of the 00's there was still a constant flurry of Transformers toys releases. Read all about Transformers main characters from the movie here, and their action figure toys.

The Ultimate Bumblebee figure was released to coincide with the movie series and stands at an awesome 14 inches tall. What exactly makes him ultimate? Well, besides being able to transform Bumblebee between his 2008 Concept Camaro car form and his fully armed battle robot mode, there are a few exciting extras that ensure that this toy lives up to its name. In car mode, he's a pretty cool car, looks like the genuine article and will roll on smooth surfaces as well as the best of the bunch. When it is time for action though, he can be easily transformed into the robot and then the fun begins. With animatronics and noises Bumblebee really comes to life. As well as having a fully articulated body meaning he can be placed into virtually any pose, he is also equipped with special animatronics and sound effects. At the touch of a button he can move his head, arms, wings and even aim his plasma cannon and fire missiles. The fun doesn't stop there as the coolest feature is the fact that the Ultimate Bumblebee figure comes with sound detection abilities. This means that he will react to noises by turning towards it and making his own noises. He also comes with 17 different phrases, battle sounds and will dance to the Devo song "Whip It"

Hasbro Transformers Ultimate Bumblebee Figure
Bumblebee is an Autobot who as well as being a fearless warrior ready to back up Optimus Prime in a fight, is also prone to his youthful nature which can cause problems at times. He is also the Autobot who is most fond of the humans and makes a best friend in the teenager Sam Whitwicky, who bought the Camaro as his first car, before he realized it was a transforming robot.
Buy Now

When Optimus Prime arrives on Earth at the same time as Ironhide, Jazz and Ratchet, he scans the new alternate mode of a semi-truck and quickly joins up with Bumblebee, where he meets the teenage boy called Sam. Optimus Prime then leads the Autobots on a mission to locate and rescue the Allspark.. With this figure, Prime has been equipped with animated mechanical triggers that at the touch of a button enable the toy to complete the transformation process by itself! Watch as armor moves into place and the true Optimus is revealed. As a vehicle, he is a humble king of the road semi-trailer truck; in robot mode he is fully capable of stopping Megatron's evil plans in their tracks. When in robot mode you can flip down the Iron Blaster to fire missiles at the enemy. Really, is it wise for anyone to stand against the Autobot leader?

Hasbro Transformers Movie Leader Optimus Prime
Optimus Prime, the name sends a shiver down the metallic spines of his enemies and instills a sense of hope and loyalty with his Autobot compatriots. He is their fearless leader and wants nothing more than peace. As the Decepticons are fully aware, it is better that you do not misinterpret his desire for there to be peace and harmony in the galaxy for a pacifist mentality. When it comes down to it, Optimus is always ready and willing to fight for what is right.
Buy Now

"Peace may triumph over War"

The trusted medic of the Autobots, Ratchet is a true friend to both his fellow Cybertronians and the humans that he helps out. There was a time when Ratchet was more concerned about dealing with the wounded, robotic and human, rather than caring about the way he looked. However, he realized that in order to stay as well disguised as possible he needed to look the part, which meant looking neat, tidy and well maintained. Plus, the nice yellow paint job looked nice! His vehicle of choice is of course the reliable Hummer H2, which has a roof rack that transforms into a combat stretcher. When it's time to show his true form, the combat stretcher/roof rack becomes a shield and he has a hidden axe and automorph cannon on his forearm.

IronHide is Optimus Prime's right hand robot. He is the Autobots weapon expert and old-fashioned soldier. His armor is not as pretty as some of the other bots, with chips and paint scars; he was walking, talking and fighting long before the other bots were even created. To match his been-there-done-that-still-standing robotic form, IronHide transforms into a hardy and robust Topkick pick-up truck. There is nothing better he likes doing than blowing Decepticon scum off the face of the rock known as Earth. He can be brash but he always has his circuits in the right place. In robot mode his dual 4-round missiles can project cannons at enemies to take them down.

Megatron - Leader of the Decepticons - "Peace through tyranny!"

From the very beginning, Megatron has always had one purpose, one desire - to destroy all Autobots and have total control of the universe. Megatron has a different view to the human beings he encounters on Earth compared to the way Prime, Bumblebee and the other Autobots have - they are simply small, insignificant pieces of fleshy that get in his way. He can be a kind leader to the Decepticons who serve him well, until they make mistakes and then he just as easily can turn on them like they were Autobots. Megatron is much taller than many of the other transformers, but shares their special ability to change into a vehicle as a form of disguise.

Transformers Movie Voyager Megatron
In the past Megatron has turned into many different things, in the beginning he actually changed into a gun that Soundwave could use. However, modern rules on what is acceptable as toys, Megatron's transformed state changed from gun to a variety of tanks and aircraft. The most recent incarnation is a large and dangerous Cybertron jet. In jet mode Megatron has dual wings that snap properly into place and the missiles that he can fire as a robot he can also fire when he is a jet.
Buy Now

A very different incarnation of Megatron, the Leader variation has a slightly different color scheme and has a more simplified design to that of the movie variation. Like every other transformer in the series of toys through the years, Megatron is articulated and can be put into most positions and he still changes into the powerful and deadly Cybertron jet. The main progression in design comes with the animated mechanical triggers. At the touch of a button you can watch the last stages of transformation happen before your eyes. See armor slide into place and flashing lights and here the familiar transformation sound effects. Once in robot mode, the Leader Megatron figure has a launching robot claw that becomes a chain whip to bash enemies and his arms become fusion cannon.

Of all the Decepticons in the galaxy there is none more deceptive and conniving than Starscream. On the surface it appears that he is devoted and loyal to the Decepticon leader Megatron. If you dig a little deeper though, you realize that Starscream has his own agenda in everything he does, even when he is supposed to follow Megatron's orders. Starscream wants to take over as leader and would happily stab Megatron in the back if the opportunity arose. Like all the other transformer toys, Starscream has the power of disguise. When incognito, Starscream is perfectly hidden as an F-22 Raptor fighter jet.

One of the most dangerous creatures in the galaxy, Starscream commands the Decepticon search for the Allspark while Megatron is missing. 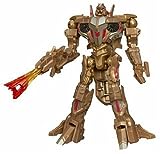 The Rest of the Decepticons - "We were once brothers...but he turned his armies against us. For their betrayal, all those who follow Megatron bear the name, Dec

Megatron is the arch-nemesis of Optimus Prime, and wants power over the Allspark, and thus over life itself. To this end, he has gathered an army of like-minded separatists - the Decepticons - to find the Allspark that the Autobots have hidden from him. 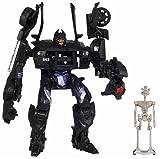 You will find many great deals on Transformers Toys through eBay auctions, often for much less that they retail for on the high street or else where on the Internet. The buying process is safe, and all major credit cards are supported.