Now, what kind of toy can you get a teen (or adult) who likes Anime? There are many types of toys out there for anime fans! The most respected and collected toys from anime are the pvc plastic figures / resin anime figures. Most of the time you can get any of them from the show with the Japanese print on the box which makes for a truly great gift. This gift shouldn’t be taken lightly though, most are expensive and are on average around 100-300 USD (10320¥-30960¥)! The one thing you can be sure of, is that if it’s a figure from an anime they like to watch, it will instantly be liked and loved by that person! If it’s someone who already has a collection of the figures, the one you get them might even become the most valued of all the they receive. So come read up, and check out how to get some of these exceptional collectables!

When it comes to anime figures, there are hundreds of thousands of them – all from their own unique anime shows and mangas. Most people would like one from an anime/manga they like, but often more or not someone who likes anime in general would like to receive any of the high quality figures. There is a bit of a warning though, a lot of the figures are ADULT oriented, and its suggested to check them out before giving them to a younger kid, as seeing some have nudity and most of them have sharp or small parts. The ideal target audiences for these figures are teens 13+ and adults. With that being said, let’s look into some of the top selling anime figures from the most popular animes/mangas!

Figures for All Ages:

Some general figures that are often made for everyone of all ages are Inuyasha, Final Fantasy, and Moon Phase. These are some of the most viewed and known animes out there.Try to find out what Anime he/she likes before buying them a figure, if you cant these general figures should go over well with anyone! 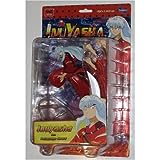 Inuyasha is a popular anime with a long 10 year history. It was one of the main anime's on Cartoon Network's Adult Swim. The series just ended in year 2008, so to many its still a fresh, entertaining - but classic show!

What a lot of people do as a gift idea, is get the anime dvd that goes with the figure! If it’s an anime you don’t think or know that they have seen before, team the item up with the Dvd to ensure they get to learn where its from and appreciate the figure more. These anime figures are really high quality toys, unlike most new toys around. This is why there so collectable and the prices go up when there out of production. Although we all know, if a toy isn’t played with at all, how much of a toy is it really? These figures double as trophies to the right kind of fan. In general there "Look don't touch" toys that deserve to sit on a shelf or computer desk. A great tip for collectors is to keep the figure in the original box. Original in the box anime figures in mint condition (keep the box good too!) will fetch a lot more money when resold in the future to other collectors when its impossible to buy them like that anymore.

Although not all of these are adult oriented, some of the following might allow figures to be viewed nude. It is for this sake, that whoever you buy them for should be old enough to respect the gift, which we all know doesn’t happen until late teens. A good example of nude anime girl pvc figures are Ikki Tousen Figures. Here are some of the adult figures:

This girl is wearing a cow print type get-up. Cow related by nature. In anime, it is common to have different types of animals mixed with the humans. Girls with tails and ears, boys with claws and scales. Regardless, both genders can have the same tails etc. 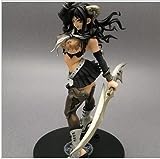 This sexy goat girl comes with interchangeable parts that can allow her to be nude. With an awesome sword and the fighting skills to boot she will be a great addition to anyones anime figure girl pvc statue collection!

The next 10 figures are found around the net. A simple google shopping search for the names there titled with should give you the product. These will range from fixed clothes to fully removable as well.

If your 12 or 75 these toys and statues are a good reminder that there is a kid inside all of us. They promote the bright anime style and make anyone who owns them just feel good in general. Most shelves are full of lower then grade items, so why not get something that will really make you or someone you know happy? There great for birthdays and Christmas and just like there in the show, they never get old. 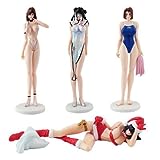 Four anime girl pvc figures for the price of one! This set is the best way to kick start your or someone elses anime girl collection!