Astro Boy was the first popular anime character! In a world where androids co-exist with humans, The original cartoon robot fights alien invaders and bad guys with his truly awesome abilities. These are my favorite toys, and posters in my collection. Watch videos of the original Astro Boy TV series, preview the 2009 movie, and play games online.

Astro Boy was created in 1952 by Osamu Tezuka. His Japanese name is Tetsuan Atomu meaning "Atom strong-arm". What's so great about Astro Boy? He can fly with rocket jets in his feet and hands. He has a laser blaster that shoots out of his fingers. He even has hidden cannons -- watch the videos and try to find them (you'll laugh!)

He was upgraded in the 21st century with new cannons in his arms to keep up with the latest bad guys. Astro Boy also has super hearing and powerful eyes, with night-vision goggles anytime he wants. Not to mention his awesome electronic brain, and for power, he has a one million horse-power engine inside. The best thing? Astro Boy is the #1 ichiban.

Tezuka Productions have always created the highest-quality, licensed toys for Astro Boy and his friends. See the latest toys available, and find rare collector's items from the 1960s and 70s. 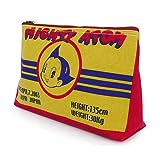 The original black and white TV program appeared in Japan on New Years Day in 1963. In September of that year, the first of over 100 episodes were dubbed into English and aired on American television until 1965, and in reruns until the early 1970s. 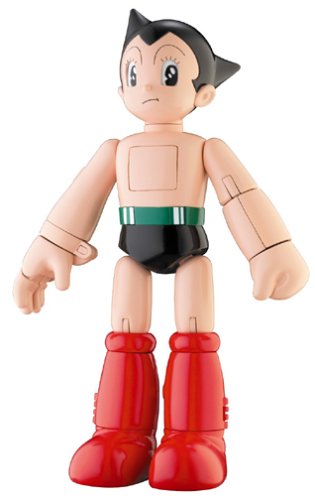 Astro Boy Interactive Astro with lights and sounds
This robot has the same high-quality as the vintage toys produced in Japan for the original Astro Boy, now valuable collectors items. Open panels to reveal the inner workings of the robot boy.
Buy Now

Play the video above and sing along with the theme song

There you go, Astro Boy,
On your flight into space
Rocket high,
through the sky
For adventures soon you will face!

Astro Boy, there you go,
Will you find friend or foe?
Cosmic Ranger,
laugh at danger,
Everything is go Astro Boy!

Crowds will cheer you,
you’re a hero,
As you go, go, go Astro Boy!

The original black and white TV show from the 1960s is super good, but the TV series in color from the 80s is awesome. See the complete series and all the movies online now with Astro Boy Instant Video (without commercial interruption) or slog through individual episodes on YouTube.

Watch a trailer for the series where 'Astro' learns about his remarkable powers.

Brochure from the 2003 birthday celebration in Japan in honor of Atom and Osamu Tezuka showing the complete cast of characters created by the master of manga and anime.

It's easy to tell the difference between the old and the new astro boy drawings. The earliest character has much sharper edges and angles, especially the styling of his hair. When you think about the style of automobiles made in the 1950s and 60s, you can begin to see the design styles of the times that appeared in all forms of art and media. Tezuka created dozen of books to teach budding illustrators and cartoonists how to draw the characters.

Schematic drawings from the "Atom Dream Project" in Kyoto from 2003. That's the same year that Astro was created by Doctor Tenma in the manga stories, so they celebrated his birthday all over Japan. Look below for more graphics and information about the birth of Astro Boy. photo: collection of the author

Japan-Rail (transit system) ran a contest during the 2003 Astro Boy "birth"-day celebration to collect rubber stamps at the subway train stations that were featured in the anime series! This is the game card that you take to a station with a rubber stamp and an ink pad. Self service. Stamp and go to the next stop on the list. Contestants send in the game card to win really big prizes. Aregato!

Did you love watching Astroboy? - TV series and the movie