The original eleven handmade dolls are now part of a family of more than 100 characters, all with their own beautiful personality and style.

Why are they called Uglydolls? — "ugly means unique and different, and celebrating who you are inside and out is the new beautiful"

These one-of-a-kind toys were created after the two artists were separated in a long-distance romance. In a letter to Sun-Min, David drew a cartoon of a creature at the bottom of the note with an inscription: "Working hard to make our dreams come true so we can be together again soon".

She made the very first uglydoll as a gift for David, and enterprising friends ordered more for their store. Ten years later, they've grown into the Uglyverse, while still keeping the same homemade spirit. 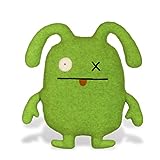 Wage was the first ugly doll created for the market in 2001. Each year, a new crop of little monsters joins the original eleven plush toys. Now there are more than 120 different characters. 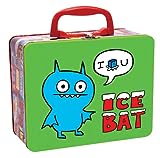 40 limited-edition, rare plushies have been created since 2003 for the San Diego Comic-Con and major retailers like FAO Schwartz, including the Citizens of the Uglyverse series.

Character biographies from the Uglydoll catalog

Download two pages with stories behind the 2012 Uglydoll family and learn about the personality of each character and their friends. Download these free catalog pages and find the personality of an Uglydoll that matches the person who gets the gift, or go for the complete opposite character traits to reinforce new behavior, or introduce a unique temperament in your house.

Read the personal biography of 12 Uglydolls for 2012

Who is your favorite Funko Pop! Vinyl Uglydoll?

This series of toys by Funko made from soft vinyl -- about 7-inches tall and 1.5-inches thick.