Fun Doctor Who Merchandise and Gifts

Fans of Doctor Who

Are you a Doctor Who fan?

Merchandise and Gift Ideas for Doctor Who Fans

Are you looking for merchandise and gift ideas for the Doctor Who fan? (Yes, that fan could very well be yourself!) Here are a few of my favorite gift ideas for this hugely successful British science fiction television show. They're a sampling of the many wonderful items that are available to give as gifts to Doctor Who fans.

Kids and adults alike enjoy this fun and imaginative show of The Doctor and his travels through time and space in the Tardis. The new television series started in 2005, after a long hiatus, and is going strong in Britain, the United States, and around the world.

Doctor Who celebrated its 50th year in 2013. Now in it's 51st year, it's still going strong with the newest Doctor as played by Peter Capaldi.

Even though time is fluid for the Doctor, we still need to keep track of the date in our own lives. Sure, you can make do with your mobile calendar apps, but this calendar has cool pictures to remind you of your favorite show!

The 2015 calendar features the last three Doctors, including the new Doctor played by Peter Capaldi, and a few of the other recent characters from the series, including Clara (the current companion), a Weeping Angel, a Dalek of course (not my favorite species in the show, but they're certainly a force to be reckoned with), and a few more.

Everyone Needs a Sonic Screwdriver

Or at least all Doctor Who fans need a sonic screwdriver!

What a great gadget to have! The most common use of the Doctor's sonic screwdriver seems to be as a lockpick to open doors, or to seal doors when the need arises. It can also be used to access computers, perform medical scans, and remotely control other devices.

It's the perfect multi-purpose tool. (I'm assuming it can be used as a regular screwdriver if the Doctor ever needs one!)

No, it still doesn't work on wood.

I'd love to have this beautifully detailed watch. Pocket watches can be receptacles for the essences of Gallifreyan Time Lords, such as The Doctor.

This beautiful and functional pocket watch with waistcoat chain is a highly-detailed replica of the pocket watch of The Master when he was living as Professor Yana. The Master, an evil renegade Time Lord, had his essence stored in this watch so he could live disguised as a human. The Professor Yana persona was a kindly man, not at all like his true self. 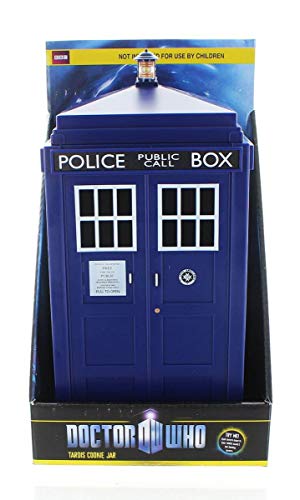 The Tardis is able to transport him anywhere and to any time. A fully functional Tardis camouflages itself to blend in where ever it lands, but because of a glitch in the circuitry one time when in landed in 1960s London, this Tardis has kept the form of a British police call box. The Doctor rather likes its form though. It's much larger on the inside than it appears on the outside (a function of its camouflaging attributes).

Shown to the right is a cookie jar in the shape of the Tardis. I bought this for my husband, who keeps it on his desk at school (he's a high school physics teacher). He loves it when students finally realize that he has a Tardis on his desk! And they think it's especially cool that it makes sounds and lights up like the real Tardis!

But is it bigger on the inside than it looks from the outside? You'll have to take a look and see for yourself.

Is this the Tardis? Or is this "just" a blue police box? Does it really matter, since the Tardis is camouflaged to look like a Blue Police Box?

Anyway, here is a great Tardis / Blue Police Box case for your iPhone 5, 5C, or 5S, from Zazzle. This is a form-fitting case that wraps the back and sides of your phone in a flexible plastic shell. It's become quite popular with Doctor Who fans!

Of course there are other similarly-designed cases for other smart phone makes and models -- browse through Zazzle to find what you need.

The Tardis is an iconic symbol of the world of Doctor Who, and there are many fun Tardis toys and products available for the Whovian (Doctor Who fan).

To see a few more cool items, check out:

Cool Doctor Who Tardis Toys and Other Tardis Stuff.

The Tardis shown at right is the one used in the TV series from 2005 to 2010, and it's now on display at the BBC Television Centre.

"The fat just walks away!" A great way to release stress -- squeeze this cute, smiling baby Adipose alien when you're feeling stressed.

In Partners in Crime, the first episode of the fourth Doctor Who series, a weight loss product creates these Adipose beings from human fat and they literally walk out and away from the person trying to lose weight. Sounds good, right? But if too many leave the human all at once, then the human dies.

You can go ahead and squeeze this Adipose alien all you want -- it'll bounce back to its original shape.

There are many fun t-shirts available that sport "Doctor Who" designs, including this

This refers to one of the best, and scariest, Doctor Who episodes in recent years - Blink, from Season 3 with David Tennant as the 10th Doctor. It features the Weeping Angels, stone angels that move only when you don't look at them. If you turn away, or even blink....they come closer. And chances are, you have to blink at some point!

This is one of my favorite Doctor Who episodes of all time!

Perhaps You're Looking for a Doctor Who Costume

There are "official" clothes and more unofficial clothing ideas for dressing like The Doctor.

For information on dressing like the 11th Doctor, as played by Matt Smitt, visit the following:

Doctor Who: The Vault: Treasures from the First 50 Years
Buy Now

50 Years of Doctor Who

Doctor Who celebrated its 50 year in 2013. This book, Doctor Who: The Vault:Treasures from the First 50 Years, is the official story of the longest running science fiction TV series ever.

This book has a chapter for each year of the show, including photos, production memos, letters, scripts, and interviews.

It's a treasure for any Doctor Who fan, whether from the earlier years, or the later seasons.

During these 50 years, there have been 11 Doctors. Now, in its 51 year, there is the 12th Doctor, who promises to be a compelling character in his own right. The saga continues!