Ever After High Dolls

Ever After High asks who you are? A rebel or a royal. But before you answer you should probably know the royals are the daughter of the good guys who are promised happy ever after in their stories. The rebels are the children who like Raven Queen do not want to follow in their parents footsteps. They don't want to follow blindly the path that is laid out before them. Raven questions the school norms and questions whether she wants to be the villain she has been fated to play.

I have only seen pictures of this doll line and so far I am liking what I'm seeing. From pictures it looks like these dolls will have a more robust body than the Monster High ghouls. It has been suggested that your Monster High dolls could wear your fairy tale gal clothing - which is a plus; however, the Ever After dolls will be unable to fit the monster high trappings.

The Ever After version of C.A. Cupid is softer and sweeter. 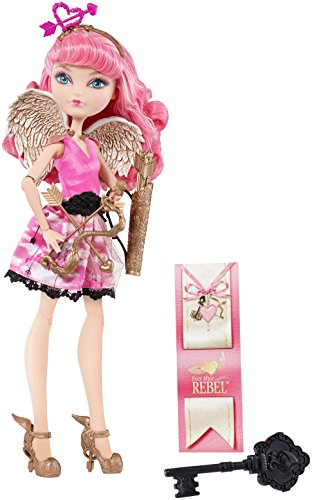 Welcome to Ever After High

Here is the webisode that appears on everafterhigh.com introducing Ravel Queen and the story of the rebels.

Ever After High Trademarks & Characters

Madeline "Maddie" Hatter has been noted in one of the current webisodes for the Ever After franchise. She is the daughter of the Mad Hatter, wears hats and loves tea. She also is the only character who can hear the Ever After narrators, which probably makes her seem a little crazy to her peers.

Another noted character is Hunter Huntsman (names a little lack luster) and he is the son of the Huntsman. He is secretly dating Ashlynn Ella according to the Ever After narrators.

Tiny is another character. He is a giant, possibly the son of the giant from Jack and the Beanstalk, though this has not be proven.

Ever After High First Chapter Cerise Hood Doll
Cerise Hood's family life is very hush hush. Turns out her Mom actually married the big bad wolf. I guess he wasn't so bad after all. Cerise features a red hood like her mother's that she uses to cover up her wolf like ears.
Buy Now

Blondie Lockes is a Royal

EVER AFTER HIGH BLONDIE LOCKES DOLL
The girl behind the magic mirror has beautiful golden hair. With a blue and white feature dress this doll seems very sweet.
Buy Now

Which Characters Spark Your Bolts?

Are you a Rebel or Royal?

Buy Ever After High Dolls

Cannot find your favorite Ever After High character at your local store? Check out ebay for a list of current auctions.

Wouldn't Apple and Daring be related?

Friction from the Rebels and the Royals

It looks like the fairy tale world is about to be turned on it's head. So unlike the Monster High series where you are encouraged to be unique and be yourself the Ever After High world seems to hinge on following the path chosen for you.

Looks like they could use Cupid's Monster High ideology at Ever After High. Perhaps her mission is to show everyone it is okay to write your own story. Perhaps it's a look at the prejudices that kept different types of Monster feuding in the Monster High world. For example, the fresh water monsters and saltwater monsters or the vampires and the werewolves (though I think twilight probably had an effect on vampire/ werewolf fight).

Once Upon a Time has turned their Red Riding Hood into a part human part wolf, Monster High had Clawdeen Wolf, daughter of the Werewolf, dressed up as Dead Riding Hood and now Cerise Hood, Red Riding Hood's daughter is hiding a big bad secret? Unless their is a twist this story has been over used. I'm hoping Ever After High will surprise us.