Marvel comic book heroes and villains - everyone from Wolverine to Iron Man and Superhero Friends: Captain America, Red Skull, Spider-Man, Iron Man, Wolverine, the Hulk and the Thing. Thor and Loki are here from the movie adaptation of the classic Norse tale. Marvel Heroes Series 2 was issued by Funko for The Avengers movie, and The Amazing Spider-man.

See the complete list of Funko Pop Marvel Heroes in the page below, and read our review about Pop Heroes from DC Universe comic books.

X-Men and the Fantastic Four

The lives of Johnny Blaze and Norrin Radd would never be the same after transforming to their new identity — Ghost Rider and Silver Surfer. Deadpool and Dark Phoenix are spin-offs from the X-Men and X-Force series by Marvel comics. Beast appeared in the first X-Men #1 comic book, created by Stan Lee, and Dr. Doom has been around long enough to fight against most of the heroes in the Marvel Universe.

The second Spider-man Pop vinyl figure toy made by Funko. This one created especially for the new movie.

Thor and Loki from Series 1 are "retired" now by Funko - the original figures #1 an #2 will not be produced again, but they are available online. See the complete Checklist of Retired Funko Pop vinyl figures for all the scarce Pop! figures.

Occasionally, you can find rare and retired Pop! figures "in the wild" -- just sitting there on a shelf with the original price tag. The Action Figure Toy Glossary has more definitions and abbreviations for collectors to help you find rare toys at stores and conventions.

Which Marvel Comics Pop! Vinyl figure do you like the most?

Wish I had the cash at the time to get this set of gold marvel comic heroes standing on the name of the comic book company. You can find Comic-Con Exclusives from past years, as people clear out their old collection to make room for new toys. 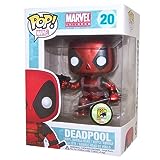 There are two designs for Iron Man, Captain America and the Hulk that were reissued for The Avengers movie. Spider-man has a new Pop! figure for The Amazing Spiderman movie.

Loki and Thor come in two different styles. The first Thor #01 is wearing a helmet, and the second figure #12 was issued without the Viking headgear. The second "Gold Loki" #16 is a 2012 San Diego Comic-Con Exclusive edition of 480.

The first Marvel Loki sold out quickly and Funko has retired the figure from production. See the Official List of Retired Funko Pop vinyl figures for more information.

Batman, Robin and Batgirl fight off the bad guys in Series 1 of the Pop! Heroes DC Comics series made by Funko. Six rivals of the caped crusaders try again and again to foil our heroes...

The wait is over -- Disney Pop! Series 4 figures are available now at the Disney Store and online. My favorite characters are Tigger, and Sorcerer Mickey from Fantasia!

Heroes from from the pages of DC Universe comics created by Funko. 12 action figure bobble-heads in a growing collection of characters from classic comic bo...

Do you collect Marvel comics and toys? - Thanks for your comments and questions