To build strength people often lift weights or use their body weight. Both methods work well. If you want to become stronger or have bigger looking muscles you need to keep increasing the amount of weight.

Some people exercise until their arms feel really weak. They give everything they have thinking it will help them improve faster. However this often causes them to feel sore for days. I prefer to do a little at a time so my muscles take less time to recover.

If you are wondering how many repetitions you should do check out my hub on muscle growth.

To prepare my body to do one handed push-ups I started doing the standard push-ups. I did not want to do a lot of them so I did sets of 8. When I could easily do 5 sets of 8 per day I increased the difficulty by doing incline push-ups. Raising your legs puts more of your body weight on your arms making the push-ups a bit more difficult. To raise my legs I put my feet on a set of stairs.

When I got good at doing incline push-ups I made it more difficult by having my feet in the air pressed against the front of the step. The next thing I did was to lift one of my legs putting more weight on my arms. After that became easy I was ready to try one handed push-ups.

I was not quite ready to do normal one handed push-ups but doing them on my knees was not difficult so I switched to decline push-ups after a couple of days. To start I used the fourth step on the stairs. My legs were on the floor and my hand was on the step. The other hand was on my back. Every few days I switched to a lower step.

You should always pay attention to your body. Exercising can cause discomfort. To become stronger you need to strain your muscles so it is expected that your muscles will become sore. If you experience a sharp pain while exercising stop. If your muscles are still hurting from the last time you exercised you should rest more so they can recover and become stronger. Working through the pain can significantly increase the amount of time it takes to recover.

Besides paying attention to the amount of pain you should also pay attention to your exercise performance. If you can not lift as much weight or do as many repetitions as you could the last time you exercised you probably need more rest. Take another day off or exercise other muscles. The time it takes for your muscles to recover changes. Keeping a log of your exercise performance is a good way to keep track of your progress.

If you notice you are becoming a lot stronger but are not gaining weight you could be losing fat or you could be losing muscle in other areas of your body. Muscle loss can happen if you are not eating enough or if you start focusing your exercises on other muscles.

You can get ideas for great workouts by checking out video sites like YouTube. You can also find them in books and DVDs. I have a book that contains martial arts exercises like finger push-ups. If the exercise is beyond your current abilities start with something easier and build up to it. The human body can adapt fairly quickly allowing you to lift heavier weights or do more repetitions. Just make sure you prepare yourself first to avoid injury. Increase the intensity and duration of your workouts gradually.

When lifting weights there is a lot of repetition. Even if you switch the amount of weight you still use the same arm movements over and over again. If you change the movement even a little it can get a lot more difficult. Try to use more of a variety of movements if you do not want to limit your strength to specific motions. If you are using free weights do not act like they are attached to something. Lift the weights out in front of you and you will notice how much harder it is than the movements people usually do.

Some exercises are boring and it can be hard to stay motivated if you only use your strength for exercising. You can make it more interesting by doing new things. Increasing the number of push-ups I could do did not really interest me. I could already do push-ups and I knew I could increase the number of push-ups if I tried. However I have not been able to successfully do one handed push-ups before. So I found the challenge more interesting.

Using your muscles in real life situation like paddling a canoe or kayak and carrying it across portages is a good way to get in shape. You could also compete against other people. For example you could spar against someone in a boxing match. It would give you a good reason to get in shape besides changing the way you look. 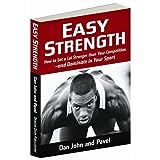 Easy Strength: How to Get a Lot Stronger Than Your Competition-And Dominate in Your Sport
Buy Now