In an ideal world those suffering from ill-health, be it physical or mental, should not be stigmatised. Sadly enough it happens far too often as I myself have experienced in a work situation where people kept on hammering on perceived short-comings related to a bout of anxiety attacks I was having. How can you defend yourself against these accusations? You want to face up to your own responsibilities and not appear to be shifting blame. You’re also angry; could people in the know not at the very least read up on the condition just a little bit? Because ganging up on someone with anxiety problems and listing all the symptoms as crimes – it doesn’t alleviate the problem, it only makes it worse. I shut up, quit and withdrew from the world.

I am slowly trying to gain footing in the outside world again, but very carefully so, in order not to create expectations which am not always able to fulfil. As such I fully recognise the notion that stigma can lead to isolation. Moreover, my own problems are trifles compared to some people’s; people I respect and love. How much silent fear do they suffer? They have learned that if they tell people they are fine those people will be relieved and happy; eager to include them in social activities and give them some attention. They have also learned that if they speak out they will be shunned again. Is it really something to be ashamed about? Is it fair that they are scared into silence by the possibility of social exclusion?

Some do not think so for they have taken it upon themselves to speak out. Loud and clear.

Photographer Alicia Shao, for example, documented her moods in the series "Somewhere in the infinity of her universe." The International Bipolar Foundation is sharing the voices of people with bipolar disorders. Not what it is, but what the misconceptions are and what they wish people would or wouldn't do, think or say.

One pen-wielding warrior who is very outspoken about the issue is author Shah Wharton. Diagnosed with bipolar disorder in 2005 she has become a strong advocate of mental health awareness. Not only does she allow readers to experience the effects by walking in the shoes of her literary characters in her own works but she also offers support and a speaking platform for other writers who cope with their own struggles day after day.

“I know myself, as a bipolar sufferer, that my writing is affected,” Wharton says. “My blotchy cognition, fuzzy memory, depleted concentration all contribute. Being an indie author/publisher means I can work at my own speed, which helps, but having the support of like-minded writers helps too.”

Shah Wharton knows how daunting it can be to open up to the world, specifically because of the risk of stigmatisation. Her questions to authors dealing with mental health issues are designed to allow the participating authors to be as open as they feel comfortable with but she does encourage them to speak out. “Remaining silent says to the world, ‘I’m as ashamed of who I am as you are.’”

The point of the Mental Muse posts isn’t to ask for pity. The dual aims seem to be that it can be an enormous relief for sufferers to speak out honestly for a change and to show that it is perfectly possible to lead a constructive life and achieve goals, such as the writing of short stories, novels, poetry and plays. Many have had the courage to go public and speak out, including a singer-song writer and authors of horror, children’s books, speculative fiction, romances, science fiction and works dealing with mental health issues.

I hope they continue to do so to set an example and to show the world that they are just human beings who do their best to cope with life and should not be labelled with their diagnosis nor judged because of it.

Want to speak out?

Speaking up: Some examples

What's the one thing you wish others understood about living with bipolar disorders?

“I know I’m hard work to be friends with, but the ones who stick around mean the world to me and have kept me alive.” — Tess Vandenberg

“People with bipolar are great people to hang out with. We do not need pity; we just need you to understand we are different.” — Sam Kay

No matter how hard you work at keeping yourself balanced, you can still get thrown off.” — Kymberly M. Price

“I hate when I tell someone I have bipolar and they get a look of terror in their eyes.” — Christine Kirton

“We do not choose to feel the way we do. We aren’t “crazy.” We have an illness. We deserve to be treated with respect, just like anyone else.” — Courtney Lovitt

“People should not feel guilty because they cannot ‘fix’ it. Company and love are the best things they can give me.” — Joseph A. Golden

“Just because I’m unable to socialize or communicate with friends and family during my low points doesn’t mean I don’t love them.” — Sherry Danielle Fish

“‘Bipolar’ is not a person. People ask how my bipolar is doing more often than how I’m doing.” — Viki Carter

“Being manic is not all fun and games. When I’m manic, I can be extremely paranoid, hard to understand (due to my fast speech) and anxious. I take risks I shouldn’t take. I’ll be broke during the duration of the episode (due to shopping sprees). I have no sense of empathy for those around me (since that would slow me down), and I’m restless constantly since I’m working on something all the time.” — Emmaleah Brooklynn Alkire

“People sometimes don’t get how debilitating it can be because it’s invisible.” — Pamela Jean

I wish when people think I’m having an ‘episode’ that they wouldn’t get scared and hide, afraid of what was to come. It sets me up to fail.” — Katie Kennard

One of Shah Wharton's books 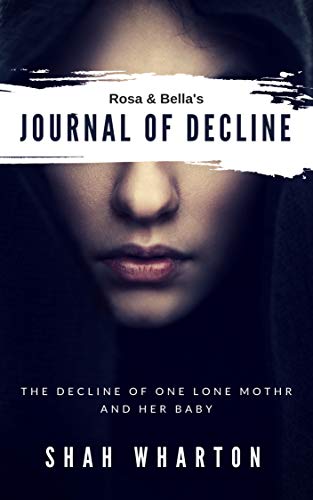 A novel that touches upon this theme