Testimony: How I overcame my panic attacks

It was a foggy night and the town appeared to be almost surreal, covered in the dark, yellow street lights. My friend and I were walking through the solitary, yet familiar roads, simply wandering with no particular destination as we talked about our latest happenings. It was Easter of 1998 and we had just finished celebrating dinner with our families. Then it just happened: out of nowhere an odd sensation took over. The town appeared to fade away becoming more and more surreal. I had an odd lifting sensation as if suddenly I was turned into a ghost wandering aimlessly those streets.

It almost felt as if I was not alive for a few seconds. Like if I was walking but yet I had no control of where I was going. I had to touch my face twice to see if I was still there. Then suddenly as an electric bolt awakened myself, panic seeped through my body. A sense of vertigo made the town lights spin around me as in an abstract painting, as my gait became unsure. I felt like I needed to lean over my friend, but then, I did not want to. I wanted to hide the abrupt panic that overcame me as just the thought of confessing to my friend how I felt, made me just feel worse and more panicky.

My heart beating fast, my head spinning, I had to finally ask my friend if we could sit down somewhere. I suddenly felt loneliness and desperation as I realized that my dad was miles away and was not coming to pick me up until hours later. I sat down startled and looked around me as a hurt animal, still unsure of what was happening.

It felt as if I was dying but yet there I was still alive walking and talking. Even talking about how I felt made me feel terribly uncomfortable as if admitting something was very wrong. The hours were ticking away for what felt like eternity, as my mind was still trying to fight the sensation of something terrible, yet obscure happening to me. I knew I was an anxious being, but I really never knew that anxiety could hit you so hard; yet, the worse part was that that was just a beginning.

My dad finally arrived. I was speechless in the car. I finally confessed I was suffering that evening from some sort of extreme dizziness. Upon arriving home I got off the car as usual to close the gate of our home, but after a few steps I had to return to the car, leaving the gate wide open. The spinning sensation was still there, for a moment I had felt like if the road was water engulfing me, pulling me down in the most odd way.

At home, I closed myself in my bedroom for a while and then got out and talked to my mom after I was able to regain some composure. I did not know what had happened, but it was awful. It felt so close to death, yet so close to feeling crazy. Little, did I know at that time that that was just the first chapter of years of panic attacks and anxiety.

Every day I woke up hoping that that was the day those terrible sensations were going to be gone and the memories were just part of a past dream. But it never happened, actually it got worse. I ended up being housebound as I was terrorized of heading out and reliving that terrible night again. Just the sight of those town lights gave me nausea and the idea of walking in those streets was terrifying. I lost my friends because I started refusing their invites and with that I lost my freedom of going out.

I simply lived in my own prison in a small house in the country with my dear horse and pets. I used to still take care of my horse and animals because they needed me the most. They kept me going on. Suddenly, it was almost as if I was gifted with a deeper understanding of animal behavior and felt a stronger connection. Fear was a common ground. My fear was primal just as my horse was fearful of flags in the wind. Riding my horse through the wet morning grass and jolting down my feelings on paper, were my only forms of therapy.

I also started reading as much as I could about anxiety and all the dynamics of the human mind. I tried to interpret my dreams and dig deep into my childhood memories as Freud always suggested. Yet, I could not find any traumas. I lead a pretty much, happy childhood and had all I wanted. So why was this happening to me?

After a year of isolating myself from friends and the world, I decided I was young and wasting the best years of my life and wanted to live and enjoy life again. I wanted it bad, but did not have the tools or resources. It felt like I had to be taught how to live normally again. With tears in my eyes and a heart ache of sorrow, I sold my horse and decided to go back living in the city. There, finally I started seeing a therapist.

Therapy was a question mark to me. My therapist never talked, never gave advice, just asked questions and allowed me to speak with my thoughts flowing irrationally. I never felt any support. His handshake was limp and cold and I felt like I was talking to a ghost. I do not know why I kept going there, but I did it for more than two years and still have to understand if he did any good.

Then it started happening. I found a new way of seeing the disease. Instead of fighting it, I decided to drop the weapons, let it flow and accept it. I particularly liked a comparison found on some Chinese literature which was saying that humans should not fight their fears but rather accept them just as bamboo stalks do. Bamboo stalks, unlike normal tree branches do not break under the pressure of wind. Rather, they bend down and accept the wind without fighting it. That was me.

I decided to accept my panic just as I did accept a headache. Just let it go and wait till it ended. It started working. I no longer tried to avoid things, rather I was confronting them. This was because I knew avoidance was only making things worse. Then the miracle of love helped me further. I met my husband who was in the Army at that time and he took me by the hand and led me back into the world to face my fears. I was finally panic free because ultimately if I wanted to see him I had to go out and fight my fears. I did not heal out of the blue, but it felt more like a gradual desensitization process with various stages of set backs and victories. It really took many months to reach that point.

Today, I live almost panic free. Anxiety comes knocking on my door every now and then, but I politely say no to its invitations. I simply continue treating anxiety as something that will eventually pass. I no longer avoid or fight it, rather I embrace it and bend to its will just as a tall bamboo stalk. I am sure I will never break apart again as I did in that foggy Easter evening back in 1998. 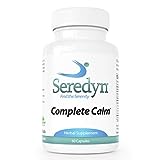 BioNeurix Natural Anxiety Relief Supplement | Seredyn Calm Anti-Anxiety & Calmness Support 60 Caps | Anti Stress Sleep Aid Herbal Capsules with Magnesium & Niacin | Improve Focus & Promote Relaxation
Worry dominates your life. You try to control your anxiety, but it often ends up controlling you. Restlessness and irritation prevent you from enjoying your day, and insomnia won't let you sleep at night. But now there is hope. With Seredyn, you can face every day with a calm and confident outlook. The serenity of Seredyn is achieved by combining the wisdom of nature with the power of science. Clinical research suggests that the natural compounds in Seredyn can help relieve anxiety, insomnia, and panic attacks.
Buy Now