How to choose a wheatgrass juicer

Wheatgrass is one of the so-called green foods and is highly valued as a natural source of nutrients. Wheatgrass juice contains 70% chlorophyll, which is often referred to as the blood of plant life; chlorophyll closely resembles the molecules of’ human red blood cells and has been shown to produce an unfavorable environment for bacterial growth in the body and therefore is effective in increasing the body's resistance to illness.

Wheatgrass is rich in nutrients, it contains 19 amino acids which are the building blocks of proteins. The body uses these amino acids to build muscle, repair cells, and clot blood. Wheatgrass also contains 90 different minerals, including calcium, phosphorus, iron, magnesium and potassium. Wheatgrass is also rich in vitamins A and C. It has more vitamin C than oranges and twice the vitamin A as carrots and is exceptionally rich in vitamins E, K, and B-complex. It is also a natural source of laetrile (B-17).

Juicing unlocks the nutrients in fruits and vegetables, concentrating them and making them more available to the cells of the body. Drinking fresh wheatgrass juice is an excellent way to increase your intake of dark green leafy vegetables in your diet.

The amount of wheatgrass juice you consume daily will depend on the results you're looking for.  Most people drink about two ounces of wheatgrass juice once or twice a day for regular maintenance.  If you're wanting to do a deep cleanse or to detoxify, you may want to consume a slightly larger dose four times a day. For best results, wheatgrass juice should be taken on an empty stomach with a meal immediately after drinking.

The energy obtained from consuming wheatgrass juice is amazing. Drinking two ounces of fresh wheatgrass juice will provide you with approximately the same amount of vitamins and minerals as eating four pounds of organic green vegetables.  When wheatgrass juice is taken on an empty stomach, it is assimilated into the blood in about 20 minutes.  The energy received from this nutrient packed juice will last throughout the day.   If you grow your own wheatgrass at home, it's good to know that a small 16" x16"  tray of wheatgrass will yield about 15 to 22 ounces of juice.  Wheatgrass tablets and powder can also be purchased and can provide an excellent alternative to the fresh juice.

The Benefits of Wheatgrass Juice 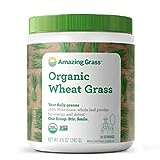 There are many different types of juicers on the market, each providing their own pros and cons. Choosing a wheatgrass juicer will depend mostly on how much you want to spend and how you want to use the juicer.

Manual Wheatgrass Juicer (Single Auger) – This is a simple, inexpensive juicer with no frills. Because it's a manual juicer, no electricity is needed.

Dedicated Electric Wheatgrass Juicer (Single Auger) – This type of juicer is motorized with a single auger. Similar to the manual single auger juicer, except you can plug it in and let the machine do the work for you

Multi-Purpose Wheatgrass Juicer (Single Auger) – This is another type of single auger juicer. Not only will it juice wheatgrass, but you can juice other fruits and vegetables as well. An excellent joice for those who want to juice a variety of produce.

Vertical Single Auger - This juicer operates with the single auger, but it works vertically as opposed to the other single auger juicers. This juicer will work well for fruits, vegetables and wheatgrass.

Twin Gear Juice Extractor – This type of juicer will juice wheatgrass as well as other fruits and vegetables.

Choosing a juicer really depends on how you’re planning to use it. There are several types of juicers available and some are better suited for juicing certain kinds of produce than others. There is no perfect juicer. Different juicer styles perform differently depending on the type of produce you're juicing, so you need to carefully evaluate your needs before purchasing.  The Wheatgrass Juicer will answer any questions you have regarding wheatgrass or your selection of a wheatgrass juicer.

Some important points you may want to consider when choosing a wheatgrass juicer:

One of the reasons why there is not an ideal juicer is because fruits and vegetables have vastly different properties. The juicing method that is most effective for one type of product may not work while juicing another. Fruits have soft cell walls and require a gentle extraction method. Some fruits can be juiced peel and all, such as apples, pears, watermelon, cantaloupe, pineapple. Citrus fruits, such as oranges, grapefruits and tangerines have a bitter outer rind that needs to be removed before juicing. Vegetables, on the other hand, have tough, fibrous cell walls and require a much more aggressive type of juicing action.

The health benefits of wheatgrass juice

Deciding on a wheatgrass juicer

There are various styles of juicers on the market, here’s a short overview of their advantages and disadvantages:

Centrifugal Juicer
The centrifugal juicer is one of the oldest juicer designs. It uses a grater or shredder disc and a strainer basket with straight sides to hold the pulp in the machine. The shredder disk is at the bottom of the basket, which revolves at a high speed (3600 rpm).  You insert the produce through the top of the juicer by pressing it through a chute.  The spinning shredder disc shreds it while the centrifugal force of the spinning basket pushes the juice through a strainer basket. The juice then comes out the front of the juicer leaving the residual pulp inside.  Generally this type of juicer can make one to two quarts of juice before you need to stop the juicer and remove the pulp.  This is a good juicer for most fruits and vegetables.

Centrifugal Ejection Juicer
This type of juicer was made popular by the "Juiceman" Infomercial. The centrifugal ejection juicer works much like the centrifugal juicer except the sides of the basket are slanted. The slanted sides make the basket self-cleaning, so you don't need to stop the juicer to empty the pulp.  In this type of juicer the pulp is ejected out of the machine, into a collection bin or basket. This style is the noisiest of all the juicers. The centrifugal ejection juicers are the easiest to use; they’re also easy to clean and are fast. This is a good for juicer most fruits and vegetables.

Masticating Juicer
The Masticating Juicer first grates, then masticates or chews the pulp to further break down the structure of the cell wall.  The juicer then presses or squeezes the pulp to extract the juice. This type of juicer uses a powerful slow-turning motor and requires a little strength to operate. It can juice almost every type of vegetable efficiently, including leafy vegetables. By blocking off the juice spout (with the blank or solid plate), it can be used to make foods such as raw applesauce, tomato sauce and baby food. It can also make peanut butter or other nut butters. It can make wonderful ice cream-like desserts from raw frozen bananas and other fruits and can be used as a grater to make shaved ice. This type of juicer is best for juicing most fruits and vegetables.

Manual Press Juicer
The press style juicer squeezes the juice out of the produce by pressure. The press juicer is a two step process: first the produce must be shredded, then it is pressed. There are two styles of juice presses. One style uses leverage to squeeze the juice, while the other type uses hydraulics. The hydraulic press produces a high- quality juice from both fruit and vegetables, but it’s a difficult and time- consuming machine to use and to clean. Pressing causes the least oxidation of the juicing methods and produces a pulp free juice since the juice is strained through cheese cloth. This type of juicer juices fruits (especially soft ones) better than other types of juicers.

Dual Stage Single Auger Juicer
This juicer works like the single auger juicer, except that after the initial crushing of the produce, the juice passes through the stage one juicing screen and into the juice cup. The crushed produce then continues on through the juicer to the second stage where a finer holed screen filters out more juice. With the single stage auger juicers (above), the juice is only produced in this second stage. The Dual Stage Single Auger Juicer typically produces more juice and works better than the single auger juicers.

Twin Gear Press -
These juicers have two gears that basically press the juice out of the produce. The screws turn at a low 90-110 rpm. Basically, the produce is pushed (with some force) into the two gears, which first shreds, and then squeezes the produce. These juicers are best for juicing vegetables since they rely on the fibrous cell wall to push the pulp through the machine. As a bonus, these machines will also juice wheatgrass (Generally a separate wheatgrass juicer is required to juice wheatgrass).  These juicers truly give "the best of both worlds" but there is one drawback - the price. They can cost two to three times as much as the Centrifugal or Mastication Juicers.

A couple of points to consider regarding the single auger vs. twin auger juicers: