Just Irregular Breathing and Snoring – Or Something More? 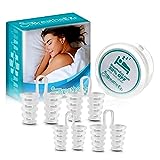 Check other hubs in our Health category!

When we live with our partner (whether husband/ wife/ significant other, etc.), we are going to observe that person sleeping at some point. If you notice irregular breathing and snoring, it might mean there’s more going on than either one of you realizes.

My partner and I have been living together for about 6 years now. I noticed years ago that he not only snores (and we don’t smoke), but also has irregular breathing while he sleeps. I honestly didn’t really think much of it and accepted it as who he is. One of the reasons I never really thought much of it is because I felt there was nothing to be alarmed about as despite the irregular breathing, I never once observed him stop breathing. If I had, then I would’ve brought up the topic immediately so that the proper medical intervention could begin. I did, after-all, know of the medical condition that a number of people have and what they need to do in order to sleep well.

Since we both felt there was no reason to be alarmed, he just slept as normal with the irregular breathing while snoring through the years; that is, until new symptoms developed. Earlier this year, he started having trouble staying awake during the day and almost had consequences at work for being seen nodding off there. He also felt extremely exhausted after waking up every-day and his short-term memory was declining from lack of proper sleep. Since we suspected it could be narcolepsy at that point, we went to our family doctor so that my partner could be evaluated. Though the doctor agreed with that possibility, he also thought it may be the other condition we were aware of. With that, a sleep study was ordered.

Results of the Sleep Study

The sleep study did reveal what the issue had been throughout the years and that it was the other condition (not narcolepsy) that we were both aware of: sleep apnea.

Sleep apnea is a condition in which the person who has it not only has irregular breathing and possibly snoring while sleeping, but also can have times in which they stop breathing while sleeping. This is because their airway can collapse at times while they are asleep. Since those that have sleep apnea aren’t consciously aware of this, there is a possibility that they could even die. That possibility increases when those who suffer from this sleep on their back. And since those with sleep apnea cannot get a proper night’s sleep without the correct help, they can easily develop increasing day-time symptoms such as having trouble staying awake during the day.

Since we now know what the issue had been, he is using a cpap machine (available by prescription only). Using a cpap machine is a fairly common intervention and allows a sleep apnea sufferer to sleep more safely. The reason it is safer is because it provides a constant flow of air while the person is sleeping. The constant air pressure helps to keep the airway open. Since the body receives the necessary oxygen when the sleep apnea sufferer momentarily stops breathing (apnea), that person starts having more restorative sleep. The constant air pressure also greatly reduces the chance of dying during the apnea episodes.

The cpap (continuous positive airway pressure) machine has really been helping my significant other. Not only is he sleeping better, but he is more alert during the day and doesn’t feel as tired during the day. Since he has just started using it, we believe we will see even more improvements as time goes on. It is also a huge relief to not only know what was causing his symptoms but also (and more importantly) to know that he is much safer while sleeping.

Keep Using It – No Matter What

The reason I was aware of sleep apnea before my partner was diagnosed is because I have talked with others who have had it. I also once worked for a camp reservation company where those with cpap machines needed to reserve the limited number of electrical sites due to medical necessity (they even qualified to reserve “handicap” sites for this reason as those sites had electric hook-up on them). It is because of interacting with these individuals that I have learned not everyone who needs a cpap regularly uses it despite being aware of the very real dangers.

Why doesn’t everyone who needs it use it regularly? Well, they tend to have a list of complaints:

Despite these and other “reasons” to not use the cpap machine, my partner and I don’t understand why people risk their lives. There are steps that can be taken to reduce the discomfort associated with cpap machines. My significant other has already tried different masks until he found one that works for him and has had loose clips replaced. He also practiced wearing the mask during the day so he could get used to wearing the mask which reduced a lot of the fear. Since he has a mask that works really well for him, he doesn’t experience sleep position issues either. In addition to that, there are a number of cpap machine types out there and with all the improved technology, it is possible to find ones that really don’t make any noticeable noise at all. I can personally tell you that the only time I hear his machine make any sound at all is when he either removes or puts on his mask and it never disrupts my sleep.

So, with all the options out there, we suggest looking for the right cpap equipment that works for you. Why risk your life when there are options for comfort out there?

Besides, some insurance companies monitor your usage via a removable data card and if there aren’t enough hours registered within a certain time period, then the insurance company won’t pay for the machine for you. Then you would really be risking your life if you couldn’t pay out of pocket!

Since cpap machines are so vital to the health and safety of the sleep apnea sufferer, consider obtaining a back-up power supply. The last thing either of you wants is to have the power unknowingly go out in the middle of the night as just that has caused sleep apnea deaths alone.

Also remember to use the cpap machine for naps (and expect us partners to nudge you awake when you start falling asleep without it)!

Does Your Partner Have Irregular Breathing?

If someone in your household has irregular breathing and/or snores, consider talking with the doctor about it. This is especially the case if the person often feels tired during the day. I can personally tell you that I wish I had been more alarmed over the years as he could have been diagnosed 5 to 6 years ago if only I had pushed the issue. Please don’t wait because if it is sleep apnea, someone’s life is on the line. Remember that I knew of sleep apnea (but only of the stop breathing part) yet still wasn’t alarmed because I noticed only irregular breathing and snoring yet it took the sleep study to reveal he does actually stop breathing at times; I never knew he sometimes stops breathing. Please, don’t wait like I did.

If you or someone you know has sleep apnea, please share your story below in the comments section!

More info on Sleep Apnea can be found here: