Potty Training Troubles - Is it stubbornness, or something more?

Come check out other articles in our Health category:

Are you and your child struggling with potty training? Are you getting really frustrated over the delay? It may not be just simple stubbornness.

If we had known a long while back that some of the things that were happening were actually symptoms, we would be a lot further along than we are now.

There were several things that were occurring on a regular basis, but we just didn't think anything of them at the time.

One of those issues was that he often had very soft stools that was very similar to diarrhea and he rarely had well-formed stools. It would often happen many times throughout the day, and sometimes a number of times within an hour or two. The output was also very variable as sometimes it would be just a little staining, while other times it would be an unbelievably large amount of output. Since it was so close to diarrhea, he was often sent home from his 4K class that was held at a daycare facility. Though he rarely had other illness symptoms, they always considered it to be diarrhea since he so rarely had well-formed stools. It is because of this they were required, per state regulations, to send him home fearing the safety of the other children despite lack of any other illness symptoms.

Another issue is that I occasionally noticed (once a great while) that his abdomen seemed a little larger (just by a very, very little bit). Since it was such an infrequent occurrence, I passed it off as him maybe gaining a little weight, doing it temporarily on purpose for fun, figured it was temporarily due to where food was at in the digestive process (he is thin), or that perhaps he was going to have a growth spurt again. Since it was always so temporary (only a day or two at most), I just never thought much of it.

His eating habits were also very variable. He would sometimes seem to be a 'never-ending bottomless pit' on various days to the opposite extreme of hardly eating anything other than a snack or two all day at other times. Since I remember having eating habits similar to that (though less extreme) when I was growing up in relation to growth spurts, I again didn't think anything of it since he had always just been that way.

Then there were all the times he woke up at night crying and was just inconsolable for long periods of time. We always did and offered everything we could for him to try and comfort him, but it always took a long time for him to calm down. We never knew why, and figured he was perhaps having bad dreams as he just never acknowledged or spoke to us in any way when going through that. Since he would always get to the point of calming down enough to go back to sleep, was always fine in the morning, and always denied being in pain, we again never thought much of it. It just mainly reminded us of the days when he had colic as an infant.

One of the major challenges with this when it was happening was that we were often called away from work to pick him up at the 4K daycare facility since we don't have anyone who is available to help us care for him when those types of things come up. We were both incredibly fortunate that we never lost our respective jobs at the time.

Since the daycare needed to follow regulations, there were many times that they required our son to be 'symptom free' for at least 24 hours before he could return. That always obviously meant yet another day of missed work for one of us.

Since these requirements were in place and we were missing work because of them, it meant that we frequently needed to take him in to the doctor's office even though they never found anything wrong. These doctor office trips were necessary as the daycare sometimes needed a note stating he was cleared to attend 4K daycare again and because our employers needed the documented proof for our absences from work.

And even though it was happening in cycles, the hours of lost sleep never helped when it was going on either.

There was one afternoon in particular when his 4K teacher approached me about all this again. She asked if we had discussed things over with a doctor, and I reminded her that he has been to the doctor's office numerous times and they have continually found nothing wrong. Through her encouraging us by sharing a story of what a friend of hers had gone through and discovered, we decided to make yet another appointment.

The reason we went ahead and made the appointment was because we had always seen different providers when the issue came up. Even though it was the same clinic and we have a primary care physician there, they schedule all patients with whichever healthcare provider happens to be available for last minute appointments. We realized it was time for someone to finally take a look back and try to piece everything together in order to help us resolve this. We also just wanted to rule out any possible underlying condition(s) that may have existed, or if continuing to see the therapist as previously suggested was our best option to help him make this transition out of pull-ups.

The provider we saw that time decided that since these issues had been going on for such an extended time that an X-Ray was appropriate just to rule out any medical issues. Since the X-Ray was not done at the clinic itself, I took him in to the affiliated hospital at a later time when it did not interfere with my work schedule. I actually felt a little "silly" taking him there as I was that confident that absolutely nothing would be discovered.

As it turns out, though, I actually couldn't have been more wrong. We received a call the next day that he actually had a very significant impacted bowel issue that needed to get cleared out. It was not, very thankfully, something that needed an immediate procedure or anything of that nature, but it did certainly need attention as soon as possible otherwise. The reason why is because they found that it was badly impacted in his lower abdomen and also went all the up his one side. It was because of this, they explained, that he literally could not tell when he needed to have a bowel movement. 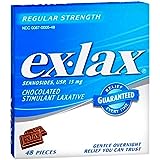 Now that we know what the issue is, we have been referred to work with specialists.

One of those specialists is a pediatric GI doctor. In order to help soften things up and clear him out, we had to follow some weekend over-the-counter medication routines. It was primarily done on the weekends in order to work around his school schedule.

One of the primary products that we have been using, per his GI and another doctor, is Miralax. It is a power that is mixed in to what he drinks and he has been receiving that twice a day with the instructions that we have been provided by his doctor.

Another medication we have been instructed to use is ex-lax. The GI doctor specifically recommended the chewy chocolate type. We were even to use well above the recommended dosing instructions for a little while.

What else has been helping is for our son to see a therapist. That had already been previously recommended to us, but we didn't really start working with the therapist until after this discovery was made. The reason why it's important now is because the doctors have informed us that he literally doesn't have that mind and body connection in relation to this yet since he could never feel it.

If you have been struggling for a while with potty training, it may be worth requesting that your medical team to look in to it just in case there is something going on. If nothing else, you can rule out any potential issues and have that peace of mind.

If you do have your doctors look in to any possible delays, then document what you can about what has been going on and for how long. It is fairly easy for me to now look back and label the various things that were happening as 'symptoms', but I never before put them all together. I thought they were isolated issues that were not connected to the same issue. Now that I have them all "spelled out" here, it seems obvious in hindsight.

Other than that, we are still working with several doctors on this issue. Our son is making good progress at a faster pace as his system gets cleaned out, but it is a slow process. And though I've shared a little bit about what his treatment plan has been, please consult with and follow your doctor's instructions for your specific set of circumstances.

Now, if you have been struggling with any potty training delays or found any medical issues that were causing it, I would love to hear from you and what worked in the comment section below.

More information about potty training in general can be found here: