Jeannie is a huge fan of Halloween and loves everything that is ghoulish. You can often find her reading or writing horror stories.

Halloween is not really a time to consider using excellent taste in decorating. You really are not going to be thinking about the best floral arrangements for your party (unless you are putting out dead flowers). You won't be thinking about how pretty your outfit will look. Your focus will be more on how far you can take your outfit to scare, amuse, or push the envelope this Halloween. 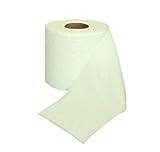 Glow in the Dark Toilet Paper

Wow! Where has this product been all my life? Not only can you freak out guests by putting this in the bathroom, you can really prank people with this stuff. Why not use it in your own home to string around the livingroom if you are having a Halloween party? Perhaps you'd like to use it on the trees in your friend's yard? If he's ever pranked you before by using regular boring old toilet paper, you will certainly have him beat this year. Make sure to beam flashlights on the glow in the dark toilet paper right before people see it! 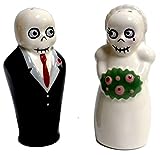 Want to shake up things this Halloween at dinner time? Why not buy some "interesting" Newlydeads Bride and Groom Salt and Pepper Shakers? Who wouldn't want to shake some salt out of the head of a small ghost? Tacky? Yes! Funny? Yes!

This is perfect for a smaller Halloween party. Also, if you are into having a simple dinner for Halloween, this is the perfect subtle Halloween prop. These also make the perfect wedding gift for your favorite goth couple!

Sure your neighbors probably won't come near your house if you put these in the front yard, but hey, it will save you money when you don't have to give out candy this year to the Trick or Treaters.

Once upon a time, I actually owned this spider. I will say it was probably the best Halloween decoration I ever had. Unfortunately, since it is made out of flimsy plastic, it is really only good for one Halloween. However, it is so awesome and so low-priced, it is well worth it. I highly recommend this decoration for anyone looking for an over-the-top decoration that is reasonably priced and easy to assemble. 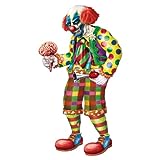 Let's face it, clowns are not really funny or cute. I am not sure why anyone pretends this to be true. Clowns are scary. Most people will admit that clowns pretty much terrify them. So why do we keep living this lie? Let's all deal with the fact that clowns are horrifying.

Now that we've come to terms with this awful truth, let's talk about clown decorations for Halloween. If you truly want to scare your friends and family, you should buy a hanging clown decoration and really take Halloween to the next level. You can easily prank those around you by hiding this guy in a place where he will be least expected. You'd just better hope they have a sense of humor about it!

If you are a fan of Ghostbusters, than surely you can appreciate a giant inflatable Stay Puft Marshmallow Man for your front yard this Halloween. All of your friends and neighbors will surely get a laugh when they see this enormous puffy guy in your yard. Not only is this hilarious, this could be a horrifying sight if you walk by it in the middle of the night. Suddenly all that marshmallowy goodness is out to get you!

Now that we've gone through this list of totally tacky and tasteless decorations, I'll bet you are ready to go out there and scare others with your extremely bad taste. Well, have fun with that! Halloween only comes once a year. Enjoy it however you see fit. If you want to deck out your place in completely ridiculous Halloween decorations, you have every right.