Masquerade masks were originally worn by Catholic Italians as part of the Lent celebrations, but nowadays are commonly used as part of the fancy dress tradition to celebrate Halloween in many other parts of the world.

The earliest historical documentation of the wearing of masquerade masks occurred in Italy in the 12th century A.D., during the annual Carnival immediately preceding Lent (the time of fasting). The word carnival is derived from carne-vale which when literally translated means "farewell to meat".

The people of Venice took to wearing masks not only during the time of the Carnival (or Carnevale as it is still known today) but year round. It afforded them anonymity in the streets but also led a to a steep rise in crime and unacceptable public behaviour, resulting in legislation in the 14th century banning the wearing of masquerades outside of Carnival time.

By this time the popularity of the masquerade mask had spread throughout Europe, and it was common for many noblemen to hold masquerade balls, which they happily embraced because it gave many of the so-called 'gentlemen' an opportunity to flirt outrageously with other people's wives in relative anonymity. 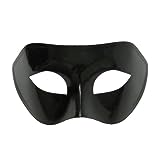 Many playwrights and authors have documented cases of serious crime taking place while the perpetrator was wearing a masquerade mask.

One such horrific event was the murder of Gustav III of Sweden by a bemasked Jacob Johan Anckarström, which was later turned into an opera- Gustav III by Eugène Scribe and Daniel Auber. Guiseppe Verde's opera A Masked Ball was also based on the same event.

The wearing of masquerade masks spread to Colonial America in the 18th century and dissenters such as writer Samuel Richardson petitioned to have them outlawed as being immoral and "encouraging foreign influence" but what little legislative changes that were made were never enforced.

Andrew Lloyd Webbers Phantom of the Opera features a masquerade ball, as does Edgar Allan Poe's short story, The Masque of the Red Death.

Herman Hesse's Steppenwolf, is based on a masquerade ball held in Zurich.

As recently as the late 1990s, masquerade balls have seen resurgence in N.America and this trend continues to this day.

So now, you want to either go to a masquerade ball or to wear fancy dress at a Halloween party. Amazon has great selection of masquerade masks that you can order online and have delivered directly to your home.

There is a superb selection of masquerade masks through in Amazon that is not shown here, so if you want to see more, for men, women or children, just click on any product link and have a look around to find a mask that is perfect for you.

If you are looking for a dress to go with your masquerade mask, take a pick of one of the ones on offer at Amazon.

The prices look great but they are no doubt light-weight costumes and not the heavy material a real ball-gown would have been made of.

Having said that, when would you ever wear a ball-gown anyway?

You are as well buying one for fancy dress instead of a real one which would no doubt cost at least ten times as much as what you will pay here.

Venetian Masks and the Venetian Carnival

Masquerade masks are often referred to as Venetian masks.

This of course references their city of origin.

Such was the popularity of masquerade masks that the mask makers were awarded their own Master Craftsmen's Guild; they had their own laws and an elevated position within Venetian society.

Even today, the Venetian Carnival is the biggest and most renowned of all Italian Carnivals, and draws visitors from the world over.

It is held annually in the 2nd week of February, and of course the wearing of the Venetian masquerade mask is obligatory.