This hub was composed to highlight favorite rituals on Chinese New Year’s Eve for individuals like myself that desire to learn more about the traditions, rituals, and symbolisms of this Asian holiday. The Chinese New Year’s celebration begins with the New Moon on the first day of the New Year and ends on the full moon 15 days later. The 15th day of the New Year is called the Lantern Festival which will be celebrated at night with lantern displays and children carrying lanterns in a parade. This year the Chinese New Year begins on February 14, 2010, that’s correct on Valentine’s Day and it is the year of the Golden Tiger.

Update: Soon we will have to bid farewell to the beautiful golden tiger and look forward to the Chinese New Year begins on February 3, 2011 and it is the year of the Rabbit; however the rituals will remain the same...

So in many instances while the West is celebrating lovers’ day or a day of romance the East will begin the celebration rituals of a New Year. However in some ways it maybe a little difficult to foresee which tradition is being celebrated.

For instance many in the Western culture will be wearing red because it represents romance, while the Chinese culture may be adorned with red to bring forth positive energy, celebrating being happy, and having smiling faces to bring joy into their household for the entire year.

As you may know the Chinese calendar is based on a combination of solar and lunar movements. The lunar cycle is about 29.5 days so in order to catch up with the solar calendar the Chinese adds an extra month once every few years. This month is added to seven years out of a 19 year cycle hence the reason the Chinese New Year falls on a different date each year.

The New Year’s Eve celebration within the Chinese culture is traditionally highlighted with a religious ceremony giving honor of Heaven and Earth, the gods of the household, and of course the family’s ancestors.The below video reflects the festive actives of last year’s Chinese New Year which was the Year of the Ox that took place in Sydney, Australia.

The Chinese New Year has its own symbolisms, traditions, and superstitions as with other holidays like the calendar New Year, Valentine’s Day, or Easter. There is symbolism for ushering out the old and bringing in the new. Some of these symbolisms may be done from cultural aspects, for feng shui reasons, or just to represent change.

Many Chinese have become modernized and may not believe in all the do’s and don’ts, however many of these traditions and customs are still performed out of respect for their elders and also provide continuity with the past. As one will see there are numerous rituals that must be performed in or before the Chinese New Year’s Eve. Here are a few of the symbolisms, traditions, and superstitions that are usually performed and or adhered to:

The sweeping of the grounds begin 10 days before the New Year Day and every corner of one’s home must be swept and cleaned in preparation for the new year. Doors and window panes usually receive a fresh coat of red paint during this time. Others prefer to decorate doors like the one pictured to your right.

The entire house must be cleaned and all cleaning equipment put away no later than New Year’s Eve. Clean sheets, preferable new sheets should be on beds and clean towels in the bathrooms and kitchen. If you own a vehicle it should be clean as well. A big taboo or creating bad feng shui would be to sweep or dust on New Year’s Day because this would be symbolizing that you are sweeping away the good fortune of the entire household.

There are several superstitions or traditions that are performed to one’s personal appearance. Washing one’s hair on New Year’s Day is believed to wash away the good luck of the New Year. One should not wear black or white clothing because they are traditionally colors for mourning; this should be a day to wear the color red to add an extra boost of energy. And ladies you will like this symbolism – wearing new clothes represents the newness that you want to bring into your life.

Oranges are excellent symbols of gold. So in many homes there will be a big bowl of 8,9, or 10 (the numbers of prosperity) oranges in the living room or centrally located in the house next to dishes of nuts or candies to symbolize an abundant, fruitful home. Place a new plant in the East sector of your house to symbolize a good health and family relationships for the New Year. It is bad feng shui to have an empty refrigerator and pantry during this time so be sure to stock up the kitchen and pantry.

Do not go into the Chinese New Year with an empty wallet. If you can fill you wallet with money for this celebratory occasion. One should perhaps set aside this time of year to purchase a new wallet or purse to start new energy for new beginnings. All debt should be paid and no lending or borrowing should be done on this day. Anyone who does may find themselves lending or borrowing all year long.

Words can Hurt You

Other superstitions entail “words” – It is unlucky to greet anyone in their bedroom so on this day even the sick get dressed and sit in the living room. The first person you meet and the first words heard are significantly important as to what the fortunes will be for the entire year. Also the participants in these New Year rituals believe that everyone should refrain from using foul language, bad or unlucky words, and no quarreling during this time period. Death and ghost stories are a big taboo as well.

I'm sure now you've realized that there are numerous rituals, symbols, and traditions surrounding this Asian holiday. There is an abundance of traditions that only certain parts of the Eastern region may choose to celebrate; however, unfortunately I'm not an expert that can differentiate these cultural differences. Hence, the reason for me to choose to share my findings on the favorite rituals on Chinese New Year's Eve only. Now let's explore the traditional foods eaten during this holiday.

More on Taboos, Superstitions, and Symbolism…

On Chinese New Year’s Eve it is customary to visit relatives and participate in a large reunion dinner of specific foods. Grace Young author of The Wisdom of the Chinese Kitchen states that traditionally families will partake of eight or nine dishes because those are lucky numbers which represents prosperity, long-lasting, and good luck.

CNY is the time of year to celebrate and honor the Kitchen God and it symbolic meaning. But for now let’s take a look at some of the foods and the symbolism represented that typically will be served at the dinner feast.

I am providing links below where you can learn more about the Chinese food dishes that can be served during this celebration. Please note also that there is a different traditional meal served on Chinese New Year’s Day as well.

After the big feast the entire family will sit up all night having fun by playing cards, board games, or watching TV programs dedicated to the celebration. All lights will remain on for the entire night, and at midnight the entire sky will be lit up by numerous fireworks and firecrackers.

In conclusion of Favorite Rituals on Chinese New Year’s Eve in Meizhou, fireworks are set off to ward off the bad spirits from the previous year and welcome the new year in. Colorful red candles and incense are also lighted during prayers, like this scene pictured to the right on Chinese New Year's Eve.

The next morning, New Year's Day, however really begins the 15 day festivities with the children greeting their parents and receiving presents of cash wrapped in red paper packages. The family will begin to move out of the house to greet other relatives living nearby and neighbors. At this point in closing, I like to wish everyone that is celebrating the Year of the Tiger a Happy Chinese New Year.... Comments are always welcomed! 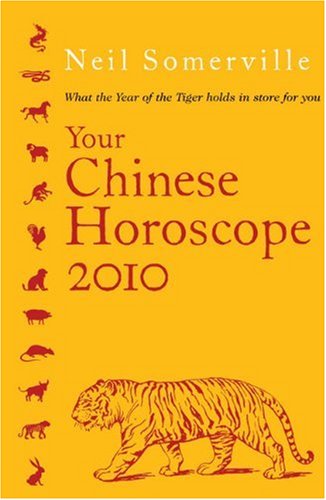 Your Chinese Horoscope 2010: What the Year of the Tiger Holds in Store for You
Buy Now