Let's face it - it's about time for Santa Claus to try a new look. He's been wearing the same plush red suit and fur-lined red hat for centuries. Every day, it's the same old thing. Doesn't Santa ever long for something a little different, something just a little unusual to shake up his wardrobe?

After all, everyone needs a little variety now and then. Today's fashions offer so much more than when he originally picked his outfit. In fact, maybe he needs to lighten up a bit and try some funny Santa hats for a change. But he might need a little encouragement. Check out a few of these funny Santa hats for yourself this Christmas and maybe he'll take a hint. From hats with Yoda ears to flashing lights, there are a lot of great new ideas to take Santa's hat to the next level of fashion.

Is it time for Santa to get rid of the beard and try a new hairdo? Maybe it's time to let his hair grow out and get a little wild. Show everyone what jolly old St. Nicholas could look like with this funny Santa hat featuring a brand new look for Santa - dreadlocks!

It may be a hip new look for the North Pole, but you should feel right at home at any holiday party in San Francisco's Haight-Ashbury district or anywhere that welcomes Rastafarians. Hat comes with dreads, but you'll need to supply the glasses and the cool attitude.

Look like Santa, you will, when you don this Yoda Santa hat, complete with big green ears like everyone's favorite Jedi Master from Star Wars. (Lightsaber and membership on the Jedi Council not included. Does not protect against attacks from the Dark Side. Do not attempt to navigate a flying reindeer-drawn sleigh through a dark neighborhood guided only by The Force while your eyes are closed.)

Not everyone loves Christmas or Santa. Want to let the world know you're a Scrooge? Then check out this Bah-Humbug hat. (But if you want to achieve true Scrooge status, drop the smile. This model apparently doesn't get the concept.)

Just how DOES Santa fly around the world in one night and avoid detection? Maybe he dumps that signature red cap and dons one of these camo Santa hats instead. With this genuine camo Santa hat, you can deliver gifts to jungle areas without fear of being discovered.

(Camo outfits for reindeer and sleigh not included.) 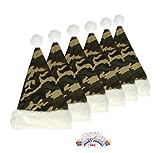 Why be boring? Anyone can get a plain old Santa suit and hat and parade around in the traditional red and white attire. But it's more fun to be unique! In addition to the hats shown above, there are plenty of other funny Santa hats available for sale online or at your local costume store that are guaranteed to lighten up any Christmas party, keep the snow off your head and put a smile on someone's face. Each of them puts a new twist on the classic fur-lined cap worn by St. Nick.

There are Santa hats with blinking lights, hats with your favorite sports team logo, hats designed to make you look like Santa Jack Skellington from Nightmare Before Christmas, twisted hats, hats in a variety of colors, and many other fun designs. And if you're shopping for a little girl, they've even got pink Disney princess Santa hats. These are just a few of the fun ideas you can pick up at Amazon or other online stores. Click on any image to learn more about that hat or to see others not shown here.

So try something new this year! Give Santa Claus a makeover and check out a few options for funky new headgear below.