The Elf on the Shelf Gift Set is a cute rhyming storybook with an accompanying Santa's elf. There are both boy and girl elf dolls available.

Each special elf works as a scout for Santa Claus, and every night he/she returns to the North Pole to report on who's been naughty and who's been nice. When the kids wake up, the elf is hiding in a new place each morning. It can be the start of a fun Christmas elf tradition for young and old alike. Read more below, or pick from one of the other elf toys shown here and start your own family elf tradition.

Elf on the Shelf gift set provided by amazon)

Whether you already love Elf on the Shelf or are just getting started, the new "Elf on the Shelf: An Elf's Story" DVD will be a great holiday movie to own, as it tells the tale of one of Santa's scout elves and his adventures helping a boy named Taylor rediscover his faith in Christmas magic.

My kids love this cute book and stuffed elf set. The only problem is that I need to remember to move the elf each night - and remember where I put him! One night our elf got lost at the North Pole and was missing for an entire day. I hid him at night and then we left early the next day for an all-day family gathering. So nobody looked for him in the morning. The morning AFTER the family gathering, our elf was nowhere to be found. He remained MIA for several hours until I remembered where I had hidden him.

So a word of caution to parents - don't let you elf get too good at hiding!

Baby Elf on the Shelf - Perfect for the youngest kids in the family!

If you've got a little one in your house, the Baby Elf on the Shelf is the perfect elf to share the elf tradition with your child.

The Christmas shelf elf that comes in the Elf on the Shelf gift set is smaller and not as cute as the larger stuffed versions. My kids prefer the larger plush version. 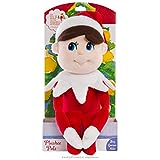 The Elf on the Shelf Plushee Pal
If you already own the book and don't need the complete Elf on the Shelf Gift Set, or simply prefer a larger, stuffed version of the character, this stuffed elf can perform the duties of the scout elf and report back to Santa.
Buy Now 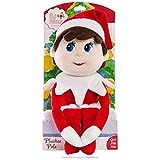 The Elf on the Shelf Gift Set Promo Video

This 30-second promo for the Elf on the Shelf gift set shows how Santa's elves return to the North Pole to report on who's been naughty and who's been nice.

Christopher Pop-In-Kins - Another helper like Elf on the Shelf

Like Elf on the Shelf, this story is about one of Santa's elves who watches over children to be sure they're behaving. This story was originally published back in 1985, so Christopher Pop-in Kins might be credited with starting the Christmas elf tradition.

Long before Elf on the Shelf came around, Hermey was helping Santa at the North Pole. Hermey the Misfit Elf may be one of Santa's best-known (former) elves. He and Rudolph the Red-Nosed Reindeer ran off together because the other elves and reindeer made fun of them, but when they returned, Hermey was able to achieve his dream of becoming a dentist.

Stuffed Elf - Boy - Elf toy is one of Santa's helpers

If you've already told your kids about the work of Santa's helper elves, you can bypass the gift books and grab an elf. These "secret" elves come in both male and female versions.

Elf Pet Costume - Could he pass as one of Santa's secret elves?

Don't let Fido miss out on the fun. Here are some cute elf dog costumes for the holidays! 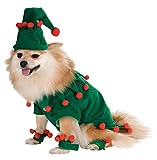 Elf Pet Costume, Small
Product description: Christmas is for family and our pets. Dress your pet in this elf costume which includes hat, tunic and cuffs.
Buy Now

Rasta Imposta Elf Dog Costume, XX-Large
Product description: Christmas is for family and our pets. Dress your pet in this elf costume which includes hat, tunic and cuffs.
Buy Now

If your elf has been doing his job, he has been reporting back to Santa Claus every night to let St. Nick know about all your child's good accomplishments this year. So make sure Santa sends a letter to your child and lets him or her know how proud Santa is.

One site that makes it easy to create your own Santa letters at home include Printable Santa Letters.com, or you may prefer the elf letter at Free Santa Letters Online.com. Or for a full-service site that lets you choose one of dozens of letters or write your own text, try Santa's Official North Pole Mail.

Elf DVD - Will Ferrell is not your average Christmas elf

What's it like to be an elf at the North Pole? This movie won't explain the Elf on the Shelf tradition, but it's a lot of fun. If you haven't seen it, go rent it, buy it or borrow it from your neighbor. It's great for the whole family.

Elf (Infinifilm Edition)
Amazon review: Elf is genuinely good. Not just Saturday Night Live-movie good, when the movie has some funny bits but is basically an insult to humanity; Elf is a smartly written, skillfully directed, and deftly acted story of a human being adopted by Christmas elves who returns to the human world to find his father. And because the writing, directing, and acting are all genuinely good, Elf is also genuinely funny. Will Ferrell, as Buddy the adopted elf, is hysterically sincere. James Caan, as his rediscovered father, executes his surly dumbfoundedness with perfect aplomb. Zooey Deschanel, as a department store worker with whom Buddy falls in love, is adorably sardonic. Director Jon Favreau (Swingers) shepherds the movie through all the obligatory Christmas cliches and focuses on material that's sometimes subtle and consistently surprising. Frankly, Elf feels miraculous. Also featuring Mary Steenburgen, Bob Newhart, Peter Dinklage, and Ed Asner as Santa Claus.
Buy Now

You Might Also Enjoy... - More pages about Santa and his elves

Elf on the Shelf Ornaments
Elf on the Shelf is the very popular toy and book designed for kids to enjoy during the holiday season. These "scout" elves live with a family and ...

Printable Magic Reindeer Food Poems
We all know Rudolph's nose helps Santa's reindeer find their way in the dark, but how do they know exactly which homes have children, and how do they keep up...

Kids Will Have Fun With a Magic Christmas Elf Doll
Ever wonder how Santa knows when you are sleeping and knows when you're awake? Or how does he know if you've been bad or good, for goodness sakes? The answer...

Santa Proof Will Amaze Your Kids
When you were a kid. did you ever stay up late and try to catch Santa Claus? I sure did. Alas, I failed every time. But every Christmas morning, our stocking...

Christopher Pop-in-Kins, a Classic Christmas Shelf Elf
A couple years ago I bought my kids the Elf on the Shelf gift set because I thought the idea of an elf who had to report to Santa about the kids' behavior wa...

Do Your Kids Have the Elf on the Shelf Gift Set?