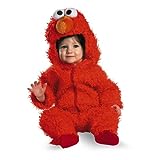 Over the years Elmo has become one of the most popular Muppet characters on Sesame, possibly second only to Big Bird in recognizability.

His quick rise to popularity is attributed to his current puppeteer, Kevin Clash, whose antics and commitment caused writers for the Elmo character to increase their focus on him, resulting in the rise to fame of the lovable red monster.

Amazingly, fans of Sesame Street have protested the increasing fame of Elmo, as it has resulted in some of their beloved characters like the Cookie Monster, Oscar the Grouch, Grover, and Big Bird, to get much less airtime. Aw the price of fame.

Be that as it may, the rise in popularity of Elmo has generated a lot of interest in wearing a costume of him at Halloween, birthday, and other costumed events.

What is very interesting about Elmo, is many of the costumes people wear of him, especially those that are homemade, are very loose interpretations, and in some cases, as you'll see below, are outrageous and funny; one is even a little scary.

Of course there are also those that are very cute, especially when donned by children, who look adorable in them.

The key to recognizing Elmo is his red color, and the big eyes and nose we all know him for.

With one exception, all of those characteristics of Elmo are including in every costume I've seen that are based upon him.

We'll start our look at Elmo costumes with a traditional look. Even with all the various adaptations associated with the original look of Elmo, this is still my favorite for a costume, as it's just a great look, and the bright red fur with the big eyes and orange nose always look great.

The key to almost every Elmo costume is to be sure to include red, and the eyes and nose, as mentioned earlier in the article, are an absolute must.

Children are great fans of Elmo, and look really cute when dressed up like the red monster. This is a great example of a children's Elmo costume.

Usually what you have with many people, including children, is the desire to keep the face of the costume open. Many don't feel comfortable feeling closed in too much. That's why you see the open face here.

But what's important for an Elmo costume is the red fur and very recognizable eyes and nose, as displayed on the top of the head. Everyone knows who this little guy is.

The Jetsons Halloween and Cosplay Costumes

Talk about an adorable, cute Elmo costume for a little girl. Little girls love this frilly, dainty look, as you can see from the delightful face shining with a smile.

You wouldn't know this as an Elmo costume without the hat placed on top of her head with the Elmo eyes and nose.

What's very unique is the inclusion of the fish on the dress with the Elmo eyes. Now that's funny.

Now this is a wild and crazy Elmo look, that would be sure to scare the daylights out of anyone who was caught off guard, and happened to turn and look and see those bulging eyes staring at you. Hilarious, to be sure.

This is the one example I mentioned earlier that didn't include an Elmo nose somewhere in the costume or makeup. But the eyes, red face, and red furry eyes let us know that this is who is being represented with this costume.

One thing that I do like about this is the red color applied to the face. It goes with the rest of it very well.

Elmo with Black Makeup on Face

I'm not sure what it is that is attempting to be implied with this Elmo costume where the guy decided to paint his face a dark color. It is definitely weird, and would, as the Elmo look above, scare someone caught unawares when confronted with the look. Those bloodshot eyes also add to some of the fear factor.

Whatever the reasoning behind it, there is no doubt it would attract attention at a costume party.

Cute Elmo Costume on Woman Posing with Oscar the Grouch

This is a good example of someone who adapts the Elmo look to their own tastes. Again, the defining factor in letting people you're dresses as Oscar when changing the look like this is to be sure you have a piece on your head with the red face, along with the eyes and nose.

Sporting a red tutu with the cute red fluffy pieces on her legs, gives the appearance of a dancing or ballerina Elmo. It's very cute, and it's funny how she's giving Oscar that cute look while he has the "scram" message on the can. Great fun.

Whether you want to wear, or have a child wear, an Elmo costume for Halloween, a birthday, or another themed event, it is one that is sure to be memorable, whatever stage of life you're, or they, are at.

It looks fantastic no matter what type of interpretation of Elmo you're attempting, from the traditional Elmo look, to the cute, and even including the outrageous as seen above.

Whatever the preference, Elmo is one character that works in a wide variety of party environments. His character is one that is worth taking a serious look at for the next party event you face.