There's no doubt that Halloween and wizards go together, so it's a natural fit to blend Harry Potter with the scary season to come up with some fun Halloween costumes.

But Harry Potter is of course more than just Harry Potter, and the fun is the other interesting friends and foes also included in the Harry Potter Halloween costume mix.

So we'll look at some of these interesting and fascinating costumes and masks which make up the Harry Potter franchise.

What's great about Harry Potter is both adults and children really like the story, and so relate to the characters. Consequently, that creates a great opportunity for all Harry Potter fans to dress up as their favorite friend or foe from the movie, and also offers chances to have fun Harry Potter-themed Halloween parties where the rich mix of characters can be shown for all to enjoy.

We'll look at some of those characters' costumes and how they'll look at Halloween time.

While we all love Harry Potter, the one problem he has is he doesn't exactly dress in a compelling way, which shows in the basic costumes below.

That of course doesn't mean anything as it's the Harry Potter Halloween accessories you add to these costumes that make it so much fun; things like Harry Potter glasses, ties and wands, among other fun things. That's what really adds to the overall mix, but you do need a cool costume to underscore it all, and these do that very well.

Like I mentioned at the beginning, adults and children alike enjoy Harry Potter, and both look for costumes to do just that.

Here is another basic, foundational costume to work from for adults, and all it needs are those numerous Harry Potter accessories to make it all work.

Now what would a Harry Potter Halloween party be without faithful friend Hagrid there to protect and guide Harry?

This is a very lifelike mask, and would fit with any cloak you have available to complement it.

And since Hagrid is a big fellow in the movie, this would work especially well for larger sized guys looking for a cool costume to wear.

Now we'll start getting into some of the characters connected to Harry Potter; both friends and foes.

First we have Dobby, who is somewhat of a sad character, but makes a great Halloween mask to wear, as you can see from the great design and detail here. Now just how do you get a costume representing the skinny little body of his?

That won't matter because the face is so outstanding that most people won't be thinking about the rest.

You couldn't list the friends of Harry Potter without including his mentor and protector Albus Dumbledore, and this Halloween mask is about as good as you can get of him. 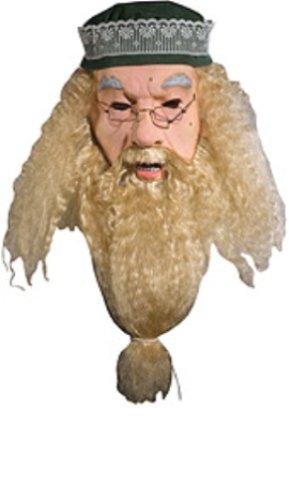 While the long black robe of the death eater costume is cool, it's the mask, sleeves and hood that make this a great Halloween costume.

You definitely need one of these to fill out the enemies Harry Potter and his friends face.

Having such a rich group of friends and foes makes a theme party of the popular story an awesome choice to participate in.

I like how this female version of the death eater costume looks. While the sleeves, hood and face are the same, the dress and especially that corset looking leather piece in the front really adds to the unique effects.

The Dementors are perfect Halloween costume material, as you can see from this sinister looking fiend. You will scare a few people and get some great comments when wearing this dark costume.

Just like you had to have Dumbledore on the good side, you also must have Voldemort as part of your Halloween experience to bring it full circle. This is a great mask and will capture the attention of everyone around you.

As you can see from these Harry Potter Halloween costumes, the real interesting costumes and masks are of the supporting cast surrounding Harry Potter, although like I mentioned earlier, it's all the accessories connected to the Harry Potter character itself that makes that work so well.

There are of course a lot more things you can do with Harry Potter and the characters in the series for Halloween, but this gives you some inspiration and ideas to work from.