Want to be scary and have cool weapons and powers on Halloween?

Halloween is the time when all the creatures and monsters of the night roam around the world and wreak chaos and havoc as they terrorize and scare all the humans.

These non-humans range from the downright frightening to the not-so-scary and yet they all have awesome powers and magical abilities with some even having such cool-looking weapons.

It's certainly more apt to dress up as any one of these monsters and creatures for Halloween especially if you feel more inclined to scare people than be the one having to scream in terror and fear.

So, which of these non-humans should you choose to dress up as for the holiday in question?

To be or not to be scary

Just because it's Halloween doesn't mean that you have to look and be scary.

You can still be a non-human monster or creature without having to look frightening and terrifying though, of course, if you're going for that look, there are many costumes that can help you.

Whatever your aim is for Halloween, you're sure to find a non-human costume that can suit your needs.

Just think about what you're looking for and who or what it is you want to be for the holiday in question. Take a look at some of the many monsters and creatures outfits that you can choose to wear for Halloween:

Medusa is a monster that appears in Greek Mythology. She is one of the three Gorgons, the other two being her immortal sisters Stheno and Euryale. She is thought of and described as having living snakes for hair as well as having the ability to turn people to stone with a mere glance.

This makes her a good choice for a Halloween costume especially if you'd like to practice your glaring skills and pretend to be able to turn people to stone just by looking at them.

California Costumes Serpentine Goddess Set
Want to turn people to stone with a mere glance? Then dress up as Medusa, the Gorgon from Greek Mythology, with this Halloween costume
Buy Now

As Medusa was said to be the only mortal Gorgon, she was defeated and subsequently beheaded by the hero Perseus who then made use of her head as a weapon.

The Medusa costume you can see to the right may appear beautiful and even glamorous but don't be fooled by that as this outfit is definitely still portraying the character Medusa as you can see from the snake headpiece that the model is wearing.

Your Medusa costume definitely wouldn't be complete without the headpiece that can make it seem like your hair is made up of snakes.

As such, the featured costume includes the snake headpiece as well as the snake cuff to help you complete your look though it's up to you to look intimidating and scary enough especially with the way you glare, so it would really seem like you can easily turn people to stone. 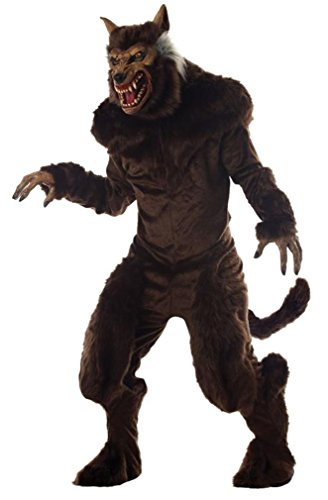 Werewolves are creatures that are part human and part wolf.

They are said to be human most of the time but will turn into a wolf once the full moon arrives though there are many other stories and beliefs regarding werewolves and how they can transform into their wolf forms.

Howl at the moon and growl at people with your best wolf or werewolf impersonation or imitation and get people afraid of being bitten or even eaten.

For best results, wear a costume like the one to the right, which can really make you look and seem like a wolf or werewolf especially with the added effect of you growling and howling.

You're sure to wow and surprise everyone at the Halloween party or event you're going to as they behold your costume that looks so real and terrifying.

Dragons are featured in many different stories, myths and legends from all over the world. There are Chinese Dragons and European Dragons, among many other dragons out there.

They come in different sizes and they usually have serpentine or reptilian traits.

We have the elemental dragons like fire dragons that can breathe fire or water dragons that may look more like serpents than dragons.

Some dragons even have wings and have the ability to fly like wind or air-type dragons.

Dragons can be very dangerous creatures what with their strength and size and their power, which would make it so easy for them to kill and destroy humans.

This makes dragons a perfectly good choice as a Halloween costume.

You could go with a costume, which can really make you look more like a real dragon what with the wings, the scales, the horns and even the tail.

You could try to sound like a dragon and even pretend to be able to breathe fire as you attempt to terrorize humans and wreak havoc just like all the other monsters and creatures of Halloween.

But if you want to look less like a dragon, you can go with costumes like the one to the right, which is a dragon lady getup - the

You're still a dragon with this outfit though it won't be as noticeable as compared to the above costume. This costume does come with a dragon headpiece and dragon tail bow, which helps identify you as a dragon to other people. 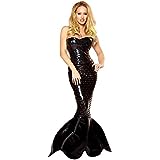 Roma Costume 2 Piece Mermaid Mistress Costume, Black, Large
Want to be a mermaid or siren for Halloween? Enchant people with your costume and voice
Buy Now

Mermaids are usually perceived as having the upper body of a human female while their lower body is that of the tail of a fish.

These aquatic creatures are pretty popular and well-known as they are also depicted in stories such as that of The Little Mermaid fairy tale by Hans Christian Andersen, which is also the title of the well-loved Disney movie.

In Greek Mythology, mermaids are associated with creatures known as Sirens.

The appearance of Sirens vary, but they are usually perceived as dangerously beautiful with enchantingly alluring singing voices that draw sailors to them whereupon they cause these sailors to die.

For Halloween, you could be a nice and sweet mermaid the likes of Ariel from Disney's The Little Mermaid.

You'd look gorgeously enchanting, but you don't have to lead anyone to their deaths with your awesome singing voice.

On the other hand, if you prefer to appear as a dangerously alluring mermaid or Siren, you could go with costumes like the black one you can see to the right.

The color itself already screams danger and caution to people, but you're still sure to look stunning with this outfit that you'd have no problem drawing people to you and charming them.

Unicorns are generally thought to be white-colored horses that have a long horn on their foreheads. They are pretty popular creatures and appear in a number of stories from around the world.

In Greek Mythology, unicorns could be associated with the creature known as Pegasus because Pegasus is also perceived to be a white-colored horse.

However, instead of having a horn on its forehead just like unicorns, Pegasus possessed wings and thus had the ability to fly.

Perhaps you could even decide to be both Pegasus and a unicorn if you can't decide which one to dress up as. For instance, you could add some wings to the unicorn costume featured above so you could also be Pegasus at the same time. Alternatively, you could transform said costume to a Pegasus costume just by removing the unicorn headpiece and getting yourself a pair of wings.

Forum Novelties womens Zombie Punk Adult Sized Costumes, Black/Gray, One Size US
Is this zombie costume for women scary, creepy, and terrifying enough for you? Would you consider wearing a really frightening outfit for Halloween?
Buy Now

If you love horror movies and books, you're sure to have encountered a whole lot of zombies already.

Zombies are undead creatures that are usually portrayed as mindless as well as being reanimated corpses.

For those who really want to look scary and those that have the intention of frightening people for Halloween, you can't possibly go wrong with a zombie costume of some sort.

These creatures can definitely look terrifying to behold especially with the proper makeup to add that horrifying zombie effect.

The zombie costume to the right illustrates this perfectly. As you can see, it's not just the dress itself that makes this costume look scary.

It's also in the way the zombie makeup is applied to the model, which makes her come across as frightening. Aside from that, remember to really act like a zombie to complete your look.

Soul / Spirits of the Dead

A Ghost is the spirit or soul of a dead person and they are usually thought to be invisible though they are sometimes said to appear as a translucent shape or image.

The color most often associated with ghosts is white hence the color of the ghost costumes that you can see below and to the right.

An all-white costume can certainly appear frightening especially if it's not just your outfit that is colored white.

You could even wear white-colored jewelry and, if your dress happens to be short, don a pair of white-colored shoes so you can be said to be white from top to bottom. The white ghost costume featured to the right could make you come across as unnerving and eerily creepy to people especially if you couple it with your best ghost impersonation complete with sound effects.

Which non-human / monster / creature will you dress up as for Halloween?

These are just some of the monsters, creatures and non-humans that you could choose to dress up as for Halloween.

While many of these creatures can be really scary and terrifying such as in the case of werewolves and zombies, remember that you can still be a non-human for Halloween without having to look horrifying and frightening if you don't want to be.

If you just want to be a non-human for the holiday in question, you have many options for possible costumes without having to look all scary. For instance, you could choose to be a mermaid, a fairy or even an elf.