Are you planning a Brave themed Princess Merida Birthday party for your little girl's next Birthday? There are many Brave party supplies available for purchase, as well as free party invitations, thank you cards and party activities to explore.

Are you planning on throwing a Brave themed party?

Princess Merida is the quirky daughter of the Scottish queen and king. She has red wild flaming hair and is an accomplished archer.

Brave is set on the Scottish Highland and follows Merida as she breaks tradition and tries to save her father's kingdom while learning the true meaning of the word Brave.

A Princess Merida themed Birthday Party will feature adventure, magic and fun. Themes of family, Scottland, and archery can be utilized to create a memorable party inspired by the Disney film Brave. 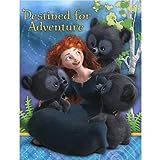 Disney's Brave Party Invitations, 8 Pack
I really love the graphic of Merida with her three brother bears. It is very sharp and draws the eye in. The text "Ready for Adventure" gives your an idea that something special is going to occur. It creates an air of excitement. For me. it's more interesting than saying you'r invite. This 8 count pack of invites does provide place to write in dates, times and contact information.
Buy Now

Before you start decorating or sending out invitation you need to work out the details of your party: the where, who and where. Once you have your guest list done and you have decided on a location it is time to start sending out the invitations.

You can set the tone for your Brave themed birthday party by sending out cute invitations featuring Princess Merida the animated star of the Disney Pixar film Brave. Invitations are a way to introduce your guests to your party theme, plant a seed of expectation, and communicate key party information.

There are three main types of Brave invites available. You can purchase a standard Brave invitation package with a picture of the Scottish maiden on the outside of the invite or your can purchase custom made Brave invites that will incorporate your child's name and age into a Disney theme. You could also take advantage of the free birthday invitations that DisneyFamily.com provides for parents planning a Merida themed party. Simply download the Brave Invitation pdf and print it, cut it, and send them out to your party guests.

For children's party themes there are usually a wide assortment of tableware products with their particular character's face splashed all over them. From cups, plates and table clothes can see Merida's wild locks decorating them. I prefer to pick one or two elements to use on my table display and then draw inspiration from the colors presented in my object of choice. For instance, if I want to use Brave themed plates or cups I will most likely opt for a solid tablecloth. Otherwise, your chosen table décor piece tend to blend together in a huge character display.

On the other hand, I do like to purchase those prepackaged party kits to save time looking for everything I need in a bunch of different stores. They usually provide basic colored balloons and streamers to that can be utilized to make your theme pop. If I get over loaded with character designed tableware I just alternate where I put them. Use the Brave table cloth on a present or food table and throw on a plain one on the eating area and use the plates.

Set the stage for your Brave themed party with a personalized Brave Birthday Party Banner. Welcome your guest to your girls Princess Merida birthday party.

This Brave Merida Cake is almost to pretty to eat.

An easy and fast way to get you homemade cake a Brave look is to purchase an edible cake topper that can be slid onto the top of your cake.

What can you eat at a Disney Brave Princess Merida themed birthday party? Take inspiration from movie characters and their heritage. Here are some delicious recipe ideas.

Princess Merida is an accomplished Archer. Take inspiration from this Brave Disney Princess and host your own Archery contest. Give each child a turn to hit the bulls-eye. The closest child to the center wins. You can provide a small prize to the winner if you choose. Perhaps his or hew own Princess Merida archer set? You will have to print out you own target as one does not come with the Official licensed Archer Set.

Looking for some fun ideas to create some Disney Brave inspired fun? Try these projects designed by Disney Family.com to add some Princess Merida themed fun.

Let your the birthday girl standout from the crowd on her birthday with a custom Brave Princess Merida t-shirt. You can add the date of the event, personalize it with her name, or create something entirely unique.

Choose from different colors and designs from Zazzle's Disney Brave collection of t-shirts and products. You could always choose an image of Angus, the lords or the 3 cute triplet bear brothers.

Want some more Free Brave Party Supplies? Check out Printabelles line of Free Brave Printable Decorations. You can download free Brave gift bag and water bottle labels, Thank-You Cards and signs. If you want a more personalized design they will accommodate you for an additional $3.00.

Disney Brave Bedding & Bedroom Décor
Create a beautiful Brave bedroom with official Brave bedding and bedroom décor merchandise. Find tips and ideas on how put together a room with a Princess Merida theme.

Brave Merida Costume
Dress up in a Princess Merida costume for play. Choose from a princess style or adventure look. Add a wig to get Merida's red curls.

Share Your Princess Merida Birthday Party Ideas - How did you celebrate?