Do You Love Crime Fiction?

Then Let Me Recommend This Fine Author, Adrian McKinty

Exactly what is the "Crime Fiction" genre? is it Suspense? Are the lead characters Loners who keep getting into trouble? Is Crime Fiction only for Macho men?

McKinty's Michael Forsythe and Sean Duffy have a lot in common with Lee Child's Jack Reacher, All three fictional men are equipped with the inexplicable ability to survive. And surviving is one thing they all do very well. Two of the characters (Forsythe and Reacher) are ex-military and cynical about it -- and they are honest about the deadly and sneaky skills learned (or maybe the skills were there in their genes all along) from the armed forces. Both play the "God of Revenge" to the max. Both spend years trying not to be found.

McKinty's Sean Duffy is a policeman in 1980s Ireland. Jack Reacher was a military policeman. It might not seem like their adventures would be alike, but they are. Both want to do the "right and moral" thing but -- guess what?--that is not always possible because of circumstances beyond their control. However, they do the best that they can and still manage to sleep at night, maybe!

So, if you love Jack Reacher, I highly recommend the featured books books below authored by Adrian McKinty.

When these 2 Authors Publish, I am reading!

I discovered Adrian McKinty by reading a book review in a local newspaper. McKinty has a series (3 books so far) about an Irish misfit somewhat like the Jack Reacher character in Lee Child novels. However, McKinty's character, Michael Forsythe, is darker in nature - but his personality can be quite humorous. So far, Jack Reacher is not funny.

McKinty is not a baby boomer, but his interests seem to be boomer oriented. I noticed quite a few references to Led Zeppelin in Bloomsday Dead.

I would love to meet McKinty, but I am afraid that the author's quick wit would do a "Michael Forsythe" on me--knock me for a loop (or on my butt). I just know that I am missing many of his literary references. As an educated person, I am embarrassed to admit that fact. I am not worthy, I am not worthy.

Child's Jack Reacher is a "Boomer" so I assume that Mr. Child is one himself. Reacher has tuned in, turned off, and checked out.  A former military policeman, Reacher saw too much when in the military. He was born in a military family and found his career there. He was good. He was smart--too smart. He had ethics. He saw too much non-ethical conduct, so he got out. He tries to disappear and is an expert at doing so. Until....? I think that modern technology (cell phones, on-line banking, etc...) has made it almost impossible to be too independent.

The List of the Michael Forsythe Series by Adrian McKinty

Read them in order!

If you do not trust me, you might trust these websites! However, I want to warn you that they agree with my assessment of McKinty.

Yes, these are my own opinions, here! (Picture is of Adrian McKinty - seriously)

Book 1--begin with this mystery/suspense novel.

Dead I Well May Be: A Novel

Some passages too wordy for my taste-but I am no authority on wordiness. Had to skim the more violent sections due to my own squeamish nature. But I am in love with Michael Forsythe. Why? He is kind of like Dexter Morgan (think Showtime Series)--he may be a murderer, but he has reasons and a sense of humor to sweeten the plot.

A real page turner for me. The writing style is more to my liking in this second book. It is more stream-lined. But, Michael's humor is still here! Even with one foot missing (lost it in the first novel), Michael just cannot keep from stepping into trouble or finding wicked women to woo.

FYI: If I ever visit Iraq, I would want Michael and Jack Reacher as companions.

(Yes, the obvious comparison to the king of Irish novelists, James Joyce is noted.)

This is the 3rd novel in this suspense series about Michael Forsythe. I could not wait to read it. Read it. Tried to not read so fast because I didn't want it to end. One day in the life of Michael in Dublin is exhausting, to say the least. The novel could be read in one day, but I wanted to take my time reaching the end.

McKinty must have a t-shirt collection. In this book, Michael is given a Led-Zeppelin tee to wear. Stairway to Heaven? If I was a true scholar, I would try to find meaning in the tee-shirts, songs and books mentioned in McKinty's writing. They must be clues to something meaningful. But alas, I am no scholar (which is obvious).

I know I am missing literary allusions, but I am not an academic reader. I just enjoy the reading.

If you want to get any of these books, click on any Amazon link on this page and search for the title. Thank you in advance!

McKinty Novels On Amazon - Go ahead! Buy a McKinty Book; I know you want to!

Most of the time I use my local library, but sometimes you really want to OWN the book!

I like to purchase books online and have had great success using Amazon.

Mr. McKinty has written quite a few novels since completing the Michael Forsythe series. I have enjoyed all of them. I encourage you to try this truly gifted author.

Another Series from Adrian McKinty! Set in the 70's, you will be introduced to a minor character named Michael Forsythe:

I Hear the Sirens in the Street: A Detective Sean Duffy Novel
Buy Now

Just kidding! But he did write a new crime fiction novel:

Read my perceptions of this novel by clicking the above link (will open a new page). The crime fighter in Fifty Grand is a woman. That fact might convince you to try this excellently written crime fiction novel. Modern day Cuba is one of the settings for this fictional story and I found the descriptions fascinating. Since we, in the USA, do not get to see what life is like in that island country, the descriptions are so very interesting. I was so fascinated, that I spent hours looking up images on Google for the different neighborhoods in Havana where the story takes place.

FYI: Michael Forsythe makes a few appearances in some of the newer crime fiction novels. Thanks, Mr. Mckinty for letting your fans know what Michael has been up to in recent times.

Links to McKinty on the WWW - Hand picked by me!

Just some interesting links about Adrian McKinty. Will keep posting!

I fell in love with Jack Reacher in this Novel by Lee Child:

I love Jack Reacher. He is the recurring character in this series by Lee Child. Why do I love him? He is tall. He is strong. He is human (though he likes to play God). He is a loyal friend. He is a military brat, like me.

Echo Burning was the first book I read by Mr. Child. I found the character of Jack Reacher and the "damsel in distress" plot of the novel fascinating. It was set in Texas--one of the reasons I chose to read it; I lived in Texas when I was in high school.

Bad Luck and Trouble(you can right click the image of the book cover to get more info) is the 11th book in the Jack Reacher series. This novel delivers more information from Reacher's past. Love it. I find it comforting that Reacher has finally developed a footprint in the world--he might not have a cell phone, but he needs a bank account! Isn't it interesting that his name is Reacher, but it he is difficult to reach? The reader meets more people from his past life as a Marine. Reacher did disappoint me is this book, though. He acted as God. For me, he became more human.

I have read or listened to the unabridged audio for all the other novels. Liked them all. I always look forward to new additions to the series. 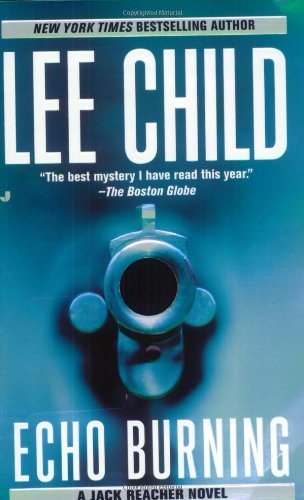 Echo Burning (Jack Reacher, No. 5)
I loved this book. It was the first Jack Reacher Novel I read and it started my obsession with this series. The main setting is the Texas Hill Country.
Buy Now

If you absolutely MUST read Jack Reacher books in order, begin with this one! 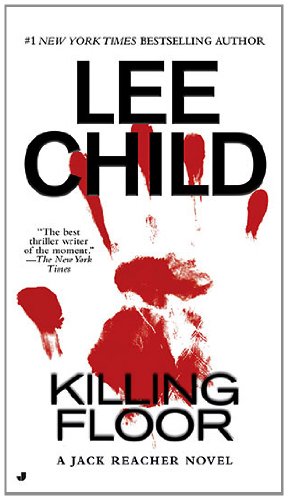 So You Love Crime Fiction - Then Check out These Fiction Blogs

Interested in Finding New Authors? - Check out These Links

Links I have found very useful to find new authors to read.

Also, feel free to tell me about a link you have found really good--make suggestions in my Guestbook.

Leave a comment if you love Crime Fiction as much as I do.

Even if you don't, I love visitors to my articles here on Squidoo. Let me know you were here.