Nicanor Parra is a Chilean writer best known for his peculiar brand of poetry that defies established literary conventions. Often compared to the American Beat poets, Parra sought to write poems that would make the genre accessible to all, bringing real-world concerns to what was often considered an isolating academic pursuit, as well as providing a response the bloody events of the Chilean Revolution.

Nicanor Parra was born in San Fabian, Chile, in 1914. He came from a well-known family, and his sister was a popular folk singer. Parra himself exhibited a taste for the threatrical. Early in his poetic career, at a reading by the famous poet Gabriela Mistral, Parra jumped on the stage and recited a poem that he had written for her. Despite the interruption of her poem, Mistral took a liking to Parra, and helped him to publish his poetry.

Though Parra is considered one of the great Chilean poets, and a contemporary of Pablo Neruda, his actual career was as a physics professor. He studied math and physics in Chile, then at Brown University in the United States. He was a physics professor at the University of Chile until his retirement in 1991, even though he was often criticized for his Marxist philosophies.

Despite his career in the realm of science and mathematics, Parra wrote poetry that was accessible and relatable to everyday people. He utilized the speech patterns and humor of the Chilean lower classes in much of his poetry, which he dubbed “antipoetry.” This antipoetry was experimental and rejected the classical or traditional forms, as well as a sense of poetic grandiosity and largesse.

Parra frequently crossed between traditional poetry and prose, attempting to create a technique that was innovative, unexpected, and new. Of his contemporary Neruda, Parra stated: “Neruda is a great poet, no question. His poetry may be as great as poetry gets. But he is a nineteenth-century man.”

“Poetry is all around us,” said Parra. “It is in the graffiti on the walls. I walk around and write down the graffiti, and those are my poems.” This is evidenced in much of Parra’s antipoetry and found poems. Hence such lines as “The automobile is a wheelchair,” “Running is absolutely forbidden,” “No sleeping permitted in this precinct.”

Parra utilizes irony, humor, cynicism, to express feelings of deep dissatisfaction. In “Letters from the Poet Who Sleeps in a Chair,” Parra says: “The poet’s duty is this/ To improve on the blank page/ I doubt if it’s possible.” Yet in another poem the same line is repeated. This time it is directed at “Young Poets” as he deconstructs the traditional forms. “In poetry everything is permitted./ With only this condition of course,/ You have to improve on the blank page.”

Parra’s justification is that “Too much blood has run under the bridge/ To go on believing/ That only one road is right.” There’s a sense of doubt that poetry can “improve on the page” can speak for what is in the mind and heart in such a complex time and space as the Chilean Revolution, but also hope that this can be done, that there can be change and a better future, that the rivers of blood may eventually wash clean.

In a country, a region, a continent with so much “blood…run under the bridge,” there is a necessity of finding expression that can encompass it all, and the means to this are rich and varied. Parra did not retreat to an apolitical realm of physics, but was vocal about his ideas, and chose to stay in Chile even as he faced harsh political criticism.

Some of his poetry reflects this idealism as much as the common language that he sought to represent. It is important to note that this common language antipoetry is only a facet of his work, and not representative of his entire body of poetry. There’s more to it than just the found items, the Chilean aphorisms. Like many other poets of witness, the theme of time and temporal disclocation surfaces in works like “Chronos” and “The Last Toast.” Parra talks about the days being “interminably long” in Chronos although “the years have wings.” In Last Toast, after rejecting both the past and the present, Parra states that “In the end/ We are only left with tomorrow./ I raise my glass/ To the day that never arrives/ But that is all/ we have at our disposal.”

Parra was a poet of the social and political realms, but he also wrestled with that designation. His poetry speaks to a struggle going on internally within his country, as well as within the man himself. Some of the poems speak directly to this personal struggle, as in “The Trap:” “During that time I kept out of circumstances that were too full of mystery….I preferred to stay at home inquiring into certain questions/ concerning the propagation of spiders.” Later in the poem: “My soul lost altitude like a punctured balloon/ the instinct of self-preservation stopped functioning.”

Within Parra's poetry, there is a range from the common language to the more philosophical questioning of time and self, to the personal struggle and experience. His poetry is at times contradictory, at times ironic and cynical, but overall there is a sense of search, of struggle, and of heartfelt expression, and ultimately, hope. 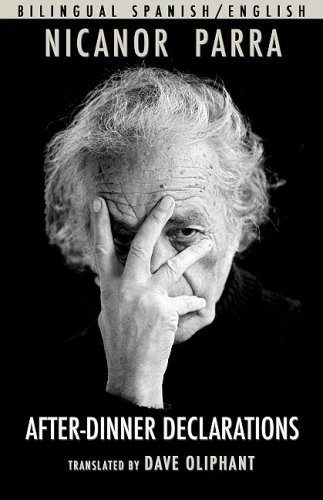 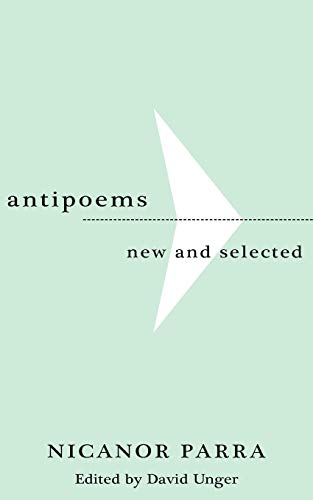