Without a doubt one of the best books I read last year was World War Z, which is a fictional account of a zombie apocalypse and worldwide war of the zombies, the book was so riveting I think about it even now, bits and pieces of the book must have been thought out by someone with common sense and actual realism, I often have this image in my mind of zombies walking on the ocean bed killing whales and other little fishes like in the book.

The books story is so written in a style that you'd think the accounts of eye witnesses and other reports were actually real and with an outbreak that is first heard of in China which some dismiss as other things entirely, there are some interviews from survivors of the zombie war which seems to have happened over a ten year period.

The best bits of the book is the reaction to the first outbreak, which in typical film style is covered up and the governments try to forget about it or don't treat it seriously and this sounds totally like today's society when we worry about swine flu, but then when something bigger comes along like a zombie virus we'll just shrug it off as just even swinier flu, as some of the best zombie films that spring to mind, the way us humans react in different ways is what is explored through the zombie hordes arriving on the west of Europe and mainland America and because the Chinese authorities covered it up, no one knows about it, so it caught everyone off guard.

The story is about piecing together all the survivor accounts which are like little stories that make up the whole of the zombie wars history and this way of telling the story was something that really engaged me to read every word as you wanted to read what happened to individuals who got caught up in the beginnings of the zombie outbreak and even in the middle of the undead armies of zombies.

The author Max Brooks examines the key players quite well I thought and their struggles with doing the right thing and the governments failings which echo what could actually happen if this was real, and all the research adds to the story of military safeguards and other stuff you would either have to have worked there or done alot of homework which the author has obviously done in depth.

The book is a really good read and one that I may read again at some point just to see if I missed anything, overall the story was the most fascinating story and it was like a real life account that occurred a couple of years ago, I know there is an audio book too which I ordered for Christmas, so if you are into zombies and want to read something that isn't your standard story with lead characters and want to look into a potential alternate universe where the zombies engulfed the planet the check this book out!

World War Z Book - Buy It On Amazon - It's A Brilliant Read!! 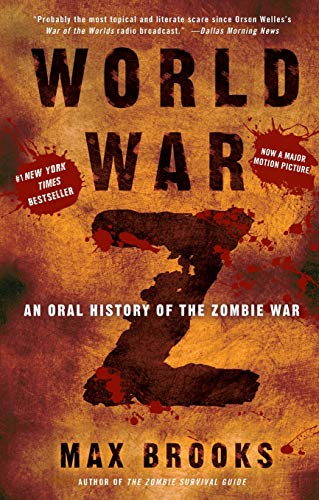 Or Buy The Audio Book Of World War Z