Murder of a Botoxed Blonde, Review

Murder of a Botoxed Blonde, a Scumble River Mystery, by Denise Swanson

If you want to know more about the Scumble River Mysteries series, check out my Hub, Scumble River Murder Mystery Series Books, in Order, Featuring School Psychologist Skye Denison. There's a link to it at the bottom of this page, also.

I do have four other reviews of individual books in the series, as well. There are links to those at the general introduction, as above.

Links to my reviews of other Scumble River Mysteries on Hubpages

How It All Came About

Skye wonders why a beautiful, seemingly familiar woman would show up at the school secretary's office asking to speak with Skye during school hours on Halloween. The woman, whose name is Margot, explains that she is a former model, and Skye has probably seen her in magazine ads.

Margot and her husband have bought an old estate in Scumble River and turned it into a spa.

Only thing is --- there have been problems: vandalism, theft, weird noises at night.

The local police have not been helpful.

Margot has read in the local paper that Skye is Scumble River's Nancy Drew. Skye gets a little nervous about such public recognition. She tries to convince Margot the article is just hyperbole.

Eventually, though --- with a little pressure from her best friend, Trixie Frayne --- Skye ends up accepting Margot's offer of a free Thanksgiving weekend at the spa.

Murder of a Botoxed Blonde, a Scumble River Mystery 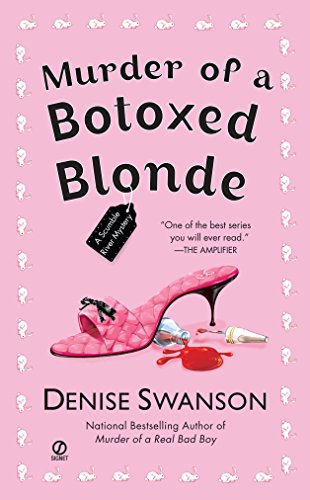 Murder of a Botoxed Blonde (Scumble River Mysteries, Book 9)
After watching the Scumble River Elementary kids marching in their Halloween costumes, Skye was thinking about going to the special ed class to see if they needed any help with their Halloween party. An announcement on the PA system asks her to report to the office. She's a little worried, because she doesn't get many calls to the office at the elementary school. The high school is a different matter.
Buy Now

In the first chapter, --- "Rubbed the Wrong Way" --- a scream awakens Skye from her dream. She was dreaming she was Thanksgiving turkey. She was wrapped in aluminum foil so tightly, she couldn't bend at the waist.

She fought her way to consciousness, but she was still half dozing as she lay trying to remember where she was and what had roused her.

It was the Wednesday afternoon before Thanksgiving, and she had been dreaming she was the holiday turkey. A dream brought on, no doubt, by the butterlike substance slathered over every inch of her skin, the seaweed wrapped around her, and the tinfoil covering her from neck to toes.

Of course, being stretched out on a steel table with an overhead heating element, baking her at what felt like 350 degrees, might have added to the illusion. That, along with the timer that had just popped out, might give anyone fowl dreams.

If you've checked out my Hub, Scumble River Murder Mystery Series Books, in Order, you will know that Murder of a Botoxed Blonde was the first Scumble River I ever read.

And, it was a very happy introduction. But, it was a couple of years ago now --- I don't know, maybe three or four?

I certainly wasn't going to write a Hub about something I'd read years earlier. I'm so glad, because I enjoyed reading this book more than I thought I would. Perhaps even more than first time around, because the settings weren't so new anymore. I did remember the solution to the mystery --- vaguely --- but cozies aren't only about the mystery.

Simon was out of town. He told Skye he was staying with Spike, an old college friend. Simon and Spike hadn't seen each other for a very long time, Simon explained.

Spike turned out to be a woman. (Yes, that is her real name.)

Spike turned out to be Simon's sister. But, he did not know he ever had a sister, until recently, when she looked him up.

Simon and Spike's mom, Bunny, used to be a showgirl in Las Vegas. We learn more about her, Spike, Simon and Skye as the book and the series go on.

Spike is a journalist. She has a key role in exposing some corruption --- and solving the case --- in Murder of a Cat's Meow, which I regret that I have not reviewed yet. (Gotta get on that!)

Thanksgiving Weekend at the Spa

Skye's mom shows up at the spa, ~~ along with Loretta, Skye's potential future sister-in-law (but still friend either way); ~~ Frannie, a student reporter from the school newspaper;~~ and Bunny, the mom of Simon, Skye's (perhaps soon - to - be - former )boyfriend. They will all be spending Thanksgiving weekend together at the spa --- eating microscopic meals, until they manage to smuggle in some real food.

There's also a band of protesters picketing outside the spa. Their organization is called "Real Women" and they're trying to stop the disturbing trend of artificial beauty in every phase of life.

The next morning, Skye finds Margot's friend, Esme --- also a former model --- murdered in the mudbath at the spa.

One of the protesters "confesses" to the killing --- obviously to get publicity for her group, "Real Women".

Skye and Wally, the police chief, publicize the fake confession, and pretend it's real, hoping it will help draw out the real murderer.

I really liked this book when I first read it, and I like it even more now. I think this might really be my favorite Scumble River mystery.

I thought the mystery here was especially well-done (but not like Thanksgiving turkey!) I remembered who the murderer was from the first time I read this book, but still --- there were many details I had forgotten. The solution to the mystery is surprising and daring. It was fun re-reading this.

It may remind you of a certain Alfred Hitchcock movie --- which is mentioned by name in the book, as a form of homage.

The Dooziers get in on the act, of course, by opening their own "spa" in their shed, with a mudbath in their plastic swimming pool.

They also inadvertently help solve the crime --- as they frequently do.

The Adam's Apple of Frannie's Eye?

Part of Skye's sleuthing technique is to ask questions discreetly under pretext so that people won't really know they're being "interviewed". She makes an appointment with Kip Gardner, the spa hairdresser, for this purpose. When she gets to the spa salon, she hears what sounds like a woman's voice, but kind of weird.

When she goes into the salon, she's amazed to see that it's Justin Broward, Frannie's boyfriend --- but also rival reporter on the school paper --- dressed as a woman. He wanted to scoop Frannie. But, since it was a "ladies only" spa weekend . . .

After "Justine" leaves, Skye is relieved to realize that Kip thinks Justin/Justine is simply an ordinary transvestite.

"The Adam's apple always gives them away," Kip explains.

Good thing, because Skye's cover could have been blown along with Justin's.