Two Moms Fight About Who Gets to Chair High School Promfest

Skye --- the school psychologist at Scumble River High --- doesn't really want to be at this meetiing. She has so many better, more important things to do.

But, Homer Knapick -- the principal of Scumble River High --- says she must.

One of the two feuding moms --- Annette Paine, the dentist's wife --- gets the other, Evie, to give up the fight.

How did that happen?

Skye notices Annette whispering something in Evie's ear. It seems that perhaps Annette knows a secret about Evie, something Evie doesn't want anyone to know about. Otherwise, why would Evie suddenly step aside so graciously?

And, to think --- it was Skye herself who had been trying so hard to encourage the school district to hire a social worker.

It seems that everybody just loves the new social worker. She's the all-around wonderful gal, who can do everything.

Or, at least, claim to be able to do everything.

Skye's not convinced, but she chalks it up to envy or professional jealousy. Even Skye's own mom thinks Jackie's wonderful. She invited Jackie over for dinner.

Later, Skye tells her brother, Vince, the hairdresser, that their mom almost buttered Jackie's rolls for her.

There's more about Vince in the other reviews, including the general introduction to the entire series. Vince also features prominently in the first Scumble River Mystery, Murder of a Small Town Honey.

Murder of a Royal Pain 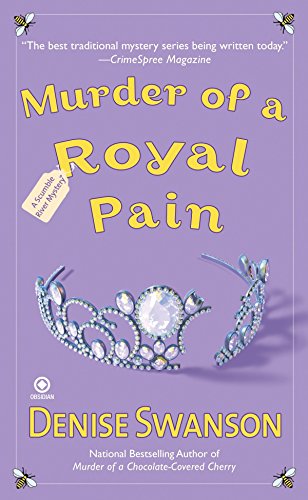 Murder of a Royal Pain: A Scumble River Mystery
Do yourself a favor, and skip this one. I don't recommend it, even though I still love the other Scumble River Murder Mysteries I've read so far. (Haven't read them all yet, though.) This book perpetuates stereotypes about people with disabilities. And, it also has a character making a lewd remark about her own family member. Yuck!
Buy Now

A Trio of Admirers

Wally, Skye's boyfriend --- and chief of the Scumble River Police Department --- has to go out of state because of a family crisis. Meanwhile, her former guy, Simon Reid, the coroner, hopes Skye will take him back.

Then, there's a handsome newcomer, who is also smitten with her. He is posing as a journalist with the local paper, but Skye is suspicious about that.

However, her misgivings don't stop her from succumbing to a little flirtation.

Wally is a little upset when he gets back, to find out these other two gentlemen have been working closely with Skye to figure out who murdered Annette Paine.

Which Witch is Which?

Skye and Annette were both dressed as witches for the Halloween Haunted House at the time of Annnette's murder.

So, Skye is also worried that the killer mistook Annette for her.

And, would be coming back to do the job right next time.

In addition to uncovering Annette's killer, she had to worry about her own life.

I Do Not Recommend This Book For Several Reasons

The first reason I don't like this book, and don't recommend it is that the murderer turns out to be a psychopath. If you've read my Hub, "Mystery Log" you'll know I disapprove of and dislike "mysteries" where the murderer is deranged, unbalanced or psychopathic.

But, a psychopath doesn't need a motive.

That removes one third of the story. I'd like to have a full story, which means I'd like a murderer with a motive.

The Second Reason I Don't Recommend It

My other reason for disliking the psychopathic killer story is really much more serious.

There is no "treatment" that can bring back one's conscience.

Society needs to be protected from people with psychpathy.

However, people with psychosis need to be protected from society.

But, people with psychoses are already scapegoated and victimized. And, they are frequently unjustly accused of violence. In fact, they are more likely to be the victim of violence than to ever commit violence against another human being.

Most people who are accused of mental "illness" --- a term which I do not use, ever (see my Hub entitled, "Why I Never Call Anyone Mentally Ill") --- are much too disorganized and lacking in focus to execute an elaborate plot like the one in this story. They can barely figure out how to get through the day.

I think Denise Swanson should know better, since she is a psychologist herself.

In this book, Skye also makes a sort of dirty remark about her own brother. I don't appreciate that, either. It's not the Scumble River I love to visit.

Scumble River has heretofore felt like a safe place for me. (Although I do have to skip over some of the activities between Skye and Wally, also, I must admit.)

Therefore --- sadly ---- this is one Scumble River Mystery I do not recommend.