Humans are born with a need to be free, loved, and secure. Some people are fortunate enough to find love, while others may search their whole lives to never find that one true love. Love is as unique as every individual that ever experiences it, making the definition a little difficult to describe.

A basic definition for true love:  Unconditional pure love in its simplest form. True love comes with no strings attached. You truly love someone without expecting anything in return, you love that individual for who they are.

People that have a difficult time putting their feelings into words, or enjoy making their own personalized greeting cards, quotes can help you find something that suits different people or occasions. With Valentine's Day coming up, why not pick out a great love quote for your special someone....

~Gravitation is not responsible for people falling in love. ~Albert Einstein

~A very small degree of hope is sufficient to cause the birth of love. ~Stendhal

~A kiss makes the heart young again and wipes out the years. ~Rupert Brooke

~First love is only a little foolishness and a lot of curiosity. ~George Bernard Shaw

~A friend is someone who knows all about you, and loves you just the same. ~Proverb

~Who so loves believes the impossible. ~Elizabeth Barrett Browning

~A hug is like a boomerang - you get it back right away. ~Bil Keane

~Life without love is like a tree without blossoms or fruit. ~Khalil Gibran

~If you want to be loved, be lovable. ~Ovid

~Love is being stupid together. ~Paul Valery

~Love is the beauty of the soul. ~Saint Augustine

~Love is the poetry of the senses. ~Honore de Balzac

~Love is the flower you've got to let grow. ~John Lennon

~If you would be loved, love and be lovable. ~Benjamin Franklin

~If you judge people, you have no time to love them. ~Mother Teresa

~A loving heart is the beginning of all knowledge. ~Thomas Carlyle

~Love means not ever having to say you're sorry. ~Erich Segal

~Take away love and our earth is a tomb. ~Robert Browning

~Life is the flower for which love is the honey. ~Victor Hugo

~ Love is liking someone better than you like yourself. ~

~ We cease loving ourselves if no one loves us. ~

Chandler Says "I Love You"

~ Love is just a word until someone comes along and gives it meaning. ~ 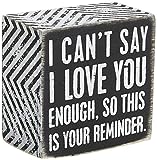 ~The best proof of love is trust. ~Joyce Brothers

~Love is a game that two can play and both win. ~Eva Gabor

~The best thing to hold onto in life is each other . ~Audrey Hepburn

~The heart is the only broken instrument that works . ~T. E. Kalem

~When you fish for love, bait with your heart, not your brain . ~Mark Twain

~To be trusted is a greater compliment than being loved. ~George MacDonald

~Love is like an hourglass, with the heart filling up as the brain empties . ~Jules Renard

~Love me when I least deserve it, because that's when I really need it. ~Swedish Proverb

~You never lose by loving. You always lose by holding back . ~Barbara De Angelis

~The most important thing in life is to learn how to give out love, and to let it come in . ~Morrie Schwartz

~Love is the only sane and satisfactory answer to the problem of human existence . ~Erich Fromm

~Love is much like a wild rose, beautiful and calm, but willing to draw blood in its defense . ~Mark Overby

~Love is the condition in which the happiness of another person is essential to your own . ~Robert Heinlein

~We come to love not by finding a perfect person, but by learning to see an imperfect person perfectly . ~Sam Keen

~Your task is not to seek for love, but merely to seek and find all the barriers within yourself that you have built against it . ~Jalal ad-Din Rumi

~ Marriage is when a man and woman become as one; the trouble starts when they try to decide which one. ~

~ Some husbands are living proof that a woman can take a joke.~

The Dating Playbook For Men: A Proven 7 Step System To Go From Single To The Woman Of Your Dreams
Buy Now

~Marriage is neither heaven nor hell, it is simply purgatory. ~Abraham Lincoln

~Some women pick men to marry--and others pick them to pieces . ~Mae West

~Marriage is nature's way of keeping us from fighting with strangers . ~Alan King

~It was a perfect marriage. She didn't want to and he couldn't . ~Spike Milligan

~The trouble with some women is that they get all excited about nothing - and then marry him . ~Cher

~A happy marriage is a long conversation which always seems too short . ~Andre Maurois

~If you would have a good wife, marry one who has been a good daughter. ~Thomas Fuller

~The difficulty with marriage is that we fall in love with a personality, but must live with a character . ~Peter De Vries

~Marriage is a good deal like a circus: there is not as much in it as is represented in the advertising . ~Edgar Watson Howe

~A successful marriage is an edifice that must be rebuilt every day. ~Andre Maurois

~Marriage is a wonderful institution...but who wants to live in an institution? ~Groucho Marx

~The world has grown suspicious of anything that looks like a happily married life . ~Oscar Wilde

~Marriage is a wonderful invention: then again, so is a bicycle repair kit. ~Billy Connolly

~If you want to read about love and marriage, you've got to buy two separate books . ~Alan King

~A good marriage would be between a blind wife and a deaf husband . ~Honore de Balzac

~I haven't spoken to my wife in years. I didn't want to interrupt her. ~Rodney Dangerfield

~Why get married and make one man miserable when I can stay single and make thousands miserable? ~Carrie P. Snow

~Marriage is a very good thing, but I think it's a mistake to make a habit out of it . ~William Somerset Maugham

~Sometimes it was worth all the disadvantages of marriage just to have that: one friend in an indifferent world . ~Erica Jong

~The formula for a happy marriage? It's the same as the one for living in California: when you find a fault, don't dwell on it. ~Jay Trachman

~Any woman who still thinks marriage is a fifty-fifty proposition is only proving that she doesn't understand either men or percentages . ~Rose F. Kennedy

~What counts in making a happy marriage is not so much how compatible you are, but how you deal with incompatibility . ~Leo Nikolaevich Tolstoy