Cooking Most Deadly, from the Angie Amalfi Series, by Joanne Pence. Review

Cooking Most Deadly, by Joanne Pence -- Fourth in the Angelina Amalfi Series

In some ways, I found this book charming. I liked the fact that the amateur detective is close with her family. I like the fact that she's a food critic, thus involved with two of life's greatest joys --- eating and writing.

Each mystery of this series contains a recipe or two. I thought the recipes were a part of the story, as in The Gourmet Detective, by Peter King, but they're added at the end --- which is fine.

The amateur detective is Angelina Amalfi, a food critic. She meets with three ex-cons who run an ersatz "restaurant" as a front for some digging they are doing into the jewelry store next door.

Meanwhile, there's a psychopath on the loose who has set his sights on Angelina. He sends his victims a dozen roses before he invades their homes.

There's also a sub-plot about Angelina and her boyfriend, Paavo Smith --- cop, luckily enough for her --- and whether or not she is ready to marry. She discusses this with her sister, her mom, and even the three ex-cons. 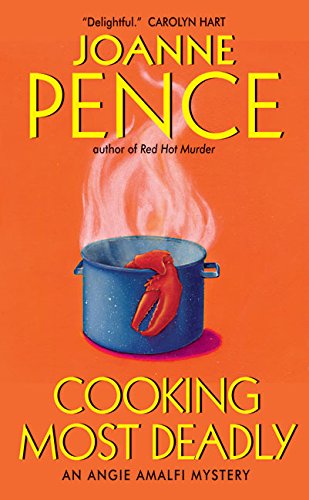 Offensive to People with Disabilities.

I dislike the theme of the deranged killer. For one thing, it's unfair to the many people with psych disabilities who do have a conscience and live quietly and peacefully.

The media doesn't seem to know the difference between "psychotic" and "psychopathic".

They are actually more likely to be the victims of violence than to ever commit violence. Sensationalistic stories like this are making their lives even more difficult.

Perhaps even making them less safe by inciting hostility toward them.

I Don't Recommend This Book

I don't know yet about the other books in this series. I might check them out, if I get a chance. So far, I'm not really enamored.

Except for the three ex-cons. They're actually rather captivating --- and great cooks, as well.

A storyline like this perpetuates stereotypes about people with psych disorders or disabilities, but there's another, lighter issue, as well.

What's the point of a murder mystery with no motive. That kind of detracts from all the fun.

Means, motive and opportunity ---- take one of those away; what do you have left? Only two thirds of a proper mystery. Also, perhaps reading murder mysteries is a way of making myself feel that I've gained a bit of control over the Grim Reaper, because of the order and logic of it all.

When the murderer is a psychopath, that's all missing.

This book also has a little too much smooching and other romance for my taste.

I would not classify this as a cozy because of the excessive violence. Psychopathic serial killers have a tendency to take a book way out of the cozy orbit. Another reason I don't recommend this book.

Fourth in the Series

This book is the fourth in a series of fourteen Angelina Amalfi mysteries. A little bit about the other books in the series follows in the table, below, entitled "Complete List of Angie Amalfi Mysteries, In Order." The information in the table is all from Joanne's website.

This is a synopsis of the information on Joanne's website, under the page, "Series". The link is below.

For a rundown of the entire series on one page, go to Joanne's website --- link below --- and click on "Series".