Frenchman Jean Patrick Modiano has won the Nobel Prize in Literature for 2014. He was out walking throughout Paris and was next to the Jardin du Luxemborg, when he heard the news over his cell phone when his daughter called to tell him he had won. He is the fifteenth French Noble Laureate in Literature.

The Royal Swedish Academy announced Modiano had won, "for the art of memory with which he as evoked the most ungraspable human destinies and uncovered the life-world of the French occupation." (during WWII ) He has been referred to as the "Marcel Proust" of our time by the Nobel committee. He has written a prolific output of more than thirty novels and screenplays during his writing career.

The Nobel Prize came as unexpected to the media shy Modiano because less than a dozen of his written works have been translated into English and several of them are even out of print today. Peter Englund of the Royal Swedish Academy said that many people outside of France would likely be unfamiliar with Modiano and his work; "he is well-known in France, but not anywhere else."

Modiano won the prestigious award for his novel's themes: the pull of the past, the threat of disappearance, the blurring of moral boundaries, and the 'dark side of the soul.'

I have not read any of his novels, but you can be sure I will read several now. His novels intrigue me because Europeans born in 1945 share a certain condition. They escaped the threat of war, but not the taint of war. They were born into freedom but conceived in turmoil.

Modiano's father was Jewish and so of further interest is that Modiano's win comes at a time when anti-Semitism in France is on the rise (as it is throughout Europe) as is the rate of French Jews' emigration to Israel.

The fear that French Jews are not safe in their own land, that French Jewish culture may vanish, is once again palpable and real. His themes are universal and timeless; present and current today.

He has written dozens of novels touching on the Nazi occupation of France during WWII from his 1968 debut novel, La Place de l'Etoile to his most recent novel, 2014's Pour que tu ne the perdes pas dans le quartier. 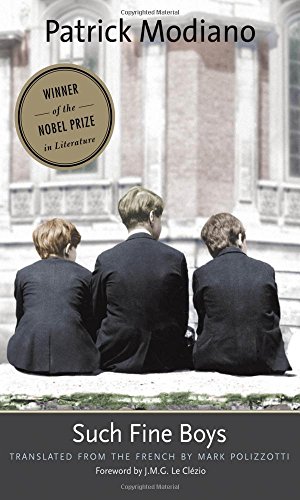 Such Fine Boys: A Novel (The Margellos World Republic of Letters)
Buy Now

Patrick Modiano was born in 1945 in Boulogne-Billancourt, a commune in the suburbs of Paris, France. His father was Albert Modiano (1912-1977), who was born in Paris and of Jewish origin and descended from a famous Shephardie family in Salonika.

His mother was Louisa Colpijn and was a Belgium (Flemish) actress known by her stage name, Louisa Colpeyn. Modiano's parents met in occupied Paris during WWII and began their relationship semi-clandestinely.

Modiano's father refused to wear the yellow Jewish star and refused to turn himself in when Paris Jews were rounded up for deportation to concentration camps. He spent the war years doing business on the black market and allegedly in close contact if not collaborating with the German Gestapo.

Modiano was brought up by his maternal grandparents who taught him to speak Flemish, his first language. This brought him closer to his brother, Rudy, who died at age ten of disease. Modiano would go on to dedicate his written works from 1967-1982 to Rudy.

Education wise Modiano worked himself up to the Lycee Henri-IV, the best prep school in Paris, and received his baccalaureate at age seventeen. He did not go on to higher education.

During his time at Henri-IV he took geometry lessons from writer Raymond Queneau, a friend of his mother. It was his meeting with Queneau, author of Zazie dans le metro, that was crucial to his writing career. Queneau introduced Modiano to the literary world and gave him the opportunity to come in contact with Editions Gallimard, his future publisher.

For five years after receiving his baccalaureate he was estranged from his family and he roamed around Paris, selling books to make money. He describes this time as a bizarre and chaotic period; a period of strange encounters with older people who instilled in him a feeling of permanent danger.

"He has said repeatedly that the Occupation is for him his prehistory. He consideres that if there hadn't been an occupation of Paris by the Germans, he wouldn't have been born."

Have you ever read any novels by Patrick Modiano?

Modiano's novels have been described by critics as subtle, rhythmic, and hypnotic investigations into the self and its memory. Jewishness, the memory of war, and hard kept secrets color his entire works.

His first novel, La Place de l'Etoile (1968) is a World War II novel about a Jewish collaborator. The 2010 release of the German translation of the novel won Modiano the German Preis der SWR - Bestenlist (Prize of the Southwestern Radio Best-of List) from the Sudenwestrundfunk radio station.

They hailed his first novel as a major post-Holocaust work. The novel has not yet been published in English.

In 1973 he co-wrote the screenplay of Lacomb, Lucien, a film directed by renowned French film director, Louis Malle. It focused on the involvement of a boy in the French Gestapo after being denied admission to the French Resistance.

The film, of course, caused controversy. Modiano's novels like this film delve into the puzzle of identity of how one can track evidence of one's existence through the traces of the past.

He has been obsessed with the troubles and shameful period of the French Occupation during which his father was allegedly engaged in some shady dealings. Modiano continues to return to this theme in all of his novels, book after book, building a remarkable legacy of works.

He writes constantly about the city of Paris, describing the evolution of its streets, its habits and its people. It is what Modiano knows best. He has rarely left France let alone left Paris. He has rarely been out of the city.

In what is considered one of his best novels, Rue des Boutiques Obnscures, (Missing Person), the male protagonist suffers from amnesia and travels from Polynesia to Rome in an attempt to reconnect with his past. This award winning novel has sold only 2,425 copies in the U.S. prior to his Nobel Prize.

The novel addresses the never-ending search for identity in a world where "the sand holds the traces of our footsteps but a few moments."

In his novel, Du Plus Loin de l'Oubi (Out of the Dark), the narrator recalls his shadowy love affair in the 1960s with an enigmatic woman. Fifteen years later after their break up, they meet again, but the woman has changed her name and denies their past love affair. What is real and what is not remains to bee seen in this dreamlike novel that is so typical of Modiano's obsession with the past.

Another one of his best novels, say the critics, is Dora Bruder, (The Search Warrant), which zeroes in on the theme of memory. It is biography, autobiography, and detective novel all rolled into one. It tells the history of its title character, a fifteen year old daughter of Eastern European Jewish immigrants.

She runs away from the safety of the convent that was hiding her and she ends up being deported to Auschwitz. Modiano first became interested in Dora's story when he came across her name in a missing headline in the December 1941 edition of the French newspaper, Paris Soir.

With his passion for the past, Modiano pieced her story together from newspaper clippings, vague testimonies and old telephone directories. Modiano has said of Dora Bruder, "I shall never know how she spent her days, where she hid, in whose company she passed, the winter months of her first escape or the few weeks of spring when she escaped for the second time. That is her secret."

In his novel, L'Horizon (2011), the narrator Jean Bosmans is a fragile man pursued by his mother's ghost, dwells on his youth, and the people he has lost. Among them is the enigmatic Margaret Le Coz, a young woman he met and fell in love with in the 1960s. The two lovers spent several weeks wandering the winding streets of a now long forgotten Paris, fleeing a phantom ghost.

One day, Margaret boarded a train and vanished, but not in Jean's memory. Forty years later he is ready and he begins to look for his vanished Margaret. Jean marks a new step in his personal quest after a mysterious walk-about in Berlin, Germany. He describes Berlin as a new city rebuilt from the ashes of war.

Jean says of his walk in Berlin, "The city is my age; its long geometric avenues still bear the marks of history. But if you look at it right you can still spot ancient wastelands beneath the concrete. These are the roots of my generation."

"that in his three dozen or so novels, Modiano has returned again and again to the same themes: the pull of the past, the threat of disappearance, the blurring of moral boundaries and the dark side of the soul."

Out of Modiano's prolific writing career only six of his books have been translated into English and today, only a few are still in print. Because he is media shy it is even difficult to find any recent profiles of him by the media.

Yale University Press is coming out with a volume of three of his novellas, but the bulk of his work remains unavailable in English.

Some of Modiano's works that have been translated to English are:

Because less than a dozen of his written works have been translated into English, several of which are even out of print today, the Nobel Prize in Literature bestowed on Modiano came as unexpected to literary critics and even Modiano himself.

Most literary critics have been waiting and were expecting American novelist and writer Phillip Roth to win the Nobel Prize in Literature. Many have criticized the Royal Swedish Academy of Eurocentrism in their choice of authors. In other words, the academy chooses European authors more than awarding a diverse field of authors.

The Academy has answered these critics by saying that is why they have chosen, for example, Latin American and Far Eastern writers at times.

I believe this criticism of the Royal Swedish Academy to be unbecoming and sour grapes. I think the academy found Modiano's body of works to speak of anti-Semitism that is rearing its ugly head presently throughout France and Europe.

Other Nobel Prize in Literature winners