Snow Flower and the Secret Fan

Physical Manipulation for the Beauty of Imprisonment

If you have ever seen the film Boxing Helena, you will begin to understand the problem of foot binding in 19th century rural China and in previous centuries. In Boxing Helena, an obsessive male cut off Helena’s arms and legs and kept her limbless person in a box so that she could never get away from him. The life of a Chinese girl and woman, Lily, in Snow Flower and the Secret Fan, named for her best friend, is like that in the early 1820s.

Previous book reviews listed above have included X-rays of bound feet after the process was complete, but Snow Flower describes the intricate horrors of the process. Few non-Chinese know about these things and the Chinese American author traveled to rural China in order to interview the oldest women about it. Although some Slavic and Asian cultures have manipulated their young women’s bodies through physical and hormonal methods to ensure Olympic Games victories, none of that approached the foot binding scenes described in riveting fashion in Snow Flower.

Snow Flower and the Secret Fan

Broken Ankles of Many Kinds

Having had a compound open fracture of one ankle, I know the torment of toes that curl under to meet the foot halfway down the sole as a result of heavy casting to train the bones to heal from a serious and odd set of fractures. Charlie horses 10 times as powerful as any I had had before were included in the side effects. Multiply these by 100 times and you have the torture of foot binding. Take the double ankle shooting and lack of medical care of a young woman depicted in a Jack London short story and you have some of the permanently crippling effects of foot binding.

As a child, I thought that foot binding was a tight wrapping of the feet to make them narrower for fashionable narrow shoes, and this was 100% incorrect. Some 6-year-olds died of the real process.

At the age of six, the mother, aunts, sisters, and grandmother (the overseer) grab the female child and hold her down. Alum is applied to clean feet in order to break down muscle tissue. The end of a long wide bandage is set upon the middle of the instep of one foot, and the length pulled forward and down over the four small toes. It is pulled tightly to bend the length of the toes forward onto the sole. The bandage is pulled tightly down the sole and up the back of the heel and tighter still around the ankle and the process continues with careful smoothing of any wrinkles, until a length of 2-3 yards of cloth bandage are secured tightly as bindings and the last end sewn in place. The procedure is repeated on the other foot.

Nu Shu Secrets On a Fan

The Tea Girl of Hummingbird Lane: A Novel
Buy Now

The 6-year-old person that would be in Kindergarten or 1st grade in America, her feet bent in half and terribly injured, is then forced to get up and walk back and forth across the floor of the room that holds the women of the house. A little light enters through lattice windows, but other communication outside the house is prohibited.

For two years, the little girls are not allowed to walk down stairs if they are in an upstairs room. They are to walk back and force until their toes break with an audible snapping, or their legs are beaten.

Every four days, the bindings are removed, the feet washed, and new bindings applied more tightly. After two years, their feet are about 2 inches wide and 3 inches long and only their big toes are unharmed. Those that die of the process do so from gangrene and systemic infections.

Four or five girls undergo this torture in Snow Flower, and one dies about 5 years later from anaphylactic shock following a bee sting. There was no medicine. She swelled up double her size and suffocated on her own swollen air passages and tongue. Because it was winter, she was stuffed in a sow drift outside until the ground was soft enough in the spring for burial.

On top of this lifestyle for women, little girls were placed into arranged marriages based on the size of their feet – the smaller, the better. Bound feet were a sort of fetish among many men. To ease the burdens of being female in China, young girls were matched with other girls of similar temperament, talents, and interests in a best-friend arranges by written contract through a matchmaker that lasted for life. Women and girls invented a female language called nu shu and passed messages to their arranged best friends (“old sames”) on the folds of fans and on handkerchiefs. 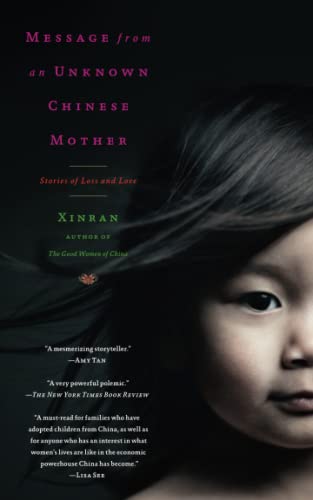 Message from an Unknown Chinese Mother: Stories of Loss and Love
Buy Now

A Tenuous Grasp On Life

Misunderstandings could occur, because the language was metaphorical. and a breech with an old same was so emotionally destabilizing that some girls or women nearly died. With bound feet, a husband and children one did not ask for, and a breech with one’s best friend – what was there to keep one alive? If such a woman had only girl babies and no sons, there was indeed to reason to keep going and she might even be punished. This novel speaks over and over about the lower status of girls than boys, the mandatory obedience to husbands, the beatings received from mothers-in-law, and the forever pain of foot binding and lost friendship.

The book is fast paced and includes moving descriptions and lyrical images of rural life and Chinese period culture. Middle school and high school girls in the West could benefit from knowing about the hardships described in this book.