The year was 1984, August - hot dusty and dry. I was a young mother of a 2 yr old and quite obviously pregnant with my second child. To break the monotony, my mother and I decided to go to the county fair, she had entered her handmade Afghan into one of the contests. Because of this we got to park in an area reserved for participants rather than the regular parking area. Which for us meant less walking to the tent area, to view the other entries.

Years before my mother had been in a serious automobile accident in West Virginia, leaving her with one leg about 5 inches shorter than the other, she had a lifted shoe but her limp was still very noticeable. Well she was patched up in the 'backwoods country' in 1963, about all they could do was 'fix her as best they could'.

My Dad, has always been the bargain hunter in the family. He had been attending State auctions for several years and always came home with gobs of fairly neat stuff. He had to buy a 'lot' of an item, which means a bunch of the same stuff. One year he got several wheelchairs, in various sizes from adult to child size.

When he bought the wheelchairs, the thought occurred that I would not need a baby stroller, this was perfect! Who needs a stroller when you have a perfectly good wheelchair! The only problem were the legs, they were rusty and wouldn’t come off, and they were sort of stuck - sticking out. Rather than use a cane Mom always pushed the cart in the store when we were shopping, this was no different for her. She decided to push the wheelchair.

The 3 of us were making our way to the tent site, Mom pushing the wheelchair, Matthew riding in the chair and me waddling my pregnant self behind the two of them. The road was of course dirt, with bumps and ruts. All of a sudden, out of the blue, Mom trips and as she is falling, she pushes the wheelchair. She lands in the dirt with a thud, the wheelchair is off and rolling across a field. I’m stunned, I just stand there.

“What do I do?” I ask myself, looking back and forth between Mom and son.  Mom is lolling about in the dirt, suffering great embarrassment and trying to get up. The only thing I can see of Matthew is his little blond head bobbing up and down, over the back of the wheelchair, as he is bumping across the field. I kind of bobbed back and forth from one foot to the other, trying to decide who to help. I did the only thing I could do at the moment. I laughed, and boy did I laugh. I stood there with my legs crossed trying to keep from peeing my pants as I roared with laughter. Mom started laughing as I was helping her up. Then I run, well maybe it was more of a fast waddle as pregnant as I was, laughing to where Matthew had finally landed, with the wheelchair upside down, in effect trapping him inside. The tears were running down my face by now, with laughing and trying to keep from wetting my pants.

He was fine, I picked him up dusted him off and put him back in his wheelchair, all the while still giggling. I helped Mom dust off as well, she too saw the humor in it and was chuckling herself. All of a sudden I looked around, there were several people standing there looking at ME…. Some with horror, and some with anger, I could almost feel the daggers they were shooting with their eyes. It took me a minute to figure out why they were so angry. Then I realized what THEY saw… 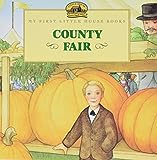 At least someone had a happy ending

Here I was making this ‘poor cripple’ woman push my ‘poor cripple’ child, he must be bad if he is in a wheelchair, she fell and he tipped over and all I could do was laugh….

My son? He wanted to ‘Do it again Gramma!’. My Mother? She won the Blue Ribbon (1st prize) for her Afghan. Me? I became the most hated woman at the County Fair (well at least temporarily)

If you enjoyed this, you may enjoy these other “Be glad you aren’t isn’t me” stories by this Author: