X-Men: The Dark Phoenix Saga collects issues No. 129-137 of the original X-Men comic-book series, a series of tales that ends with the final battle over Jean Grey's existence as the Phoenix. Or at least that's how it was when the comics were published in the early 1980s. Later stories would undercut the impact of this classic tale, but it's still one of the best that Marvel Comics has ever produced.

The Phoenix had been introduced years earlier, in X-Men No. 101, when Jean Grey's Marvel Girl (one of the original X-Men) was transformed into an all-new, much-more powerful character with a really cool costume. But over the following issues it become clear that with her new powers came a corrupting force that was trying to take control.

Writer Chris Claremont brought back a longtime X-Men villain, illusionist Mastermind, who enthralls Jean Grey and causes her to lose control of the Phoenix force, giving birth to Dark Phoenix. Dark Phoenix at one point crosses the galaxy and destroys a planet full of living beings, leading to a final battle for her life on the Moon in issue No. 137 (entitled ''Phoenix Must Die!'').

The nine issues of the Dark Phoenix saga, included in this one volume, make a great collection, with each one a classic that builds on the one before.

You Can Buy X-Men: The Dark Phoenix Saga Here! 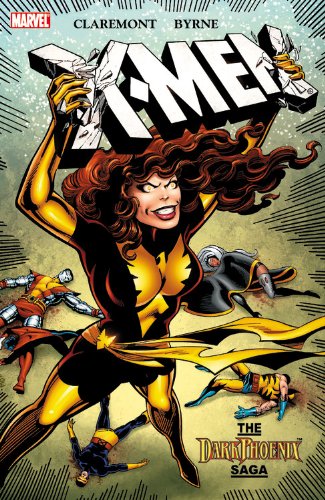 X-Men: The Dark Phoenix Saga
This is the volume I have reviewed, collecting X-Men issues No. 129-137 in a paperback edition.
Buy Now

The Youngest X-Man Ever!

The first story in this collection is notable for another reason: the introduction of Kitty Pryde, who will end up joining the X-Men as their youngest member. I have read that the character was introduced because people above writer Chris Claremont felt there should be at least one student at Professor X's school, and the X-Men were too old for that.

At age 13, Kitty would be the youngest member up to that time, and Claremont does a good job in exploring her youth and teenage anxieties about being a mutant. She would later go on to become one of Marvel Comics' more enduring characters, with a strong following.

Her introduction in X-Men No. 129 coincides with the beginning of the team's fight against Mastermind and the Hellfire Club, and is a good place to start this collection.

The Dramatic Debut of The Dazzler

The Disco Queen as Superhero!

The second issue collected in this volume introduces another character that would go on to be an enduring, if secondary, one in the Marvel Universe.

The Dazzler, a mutant with the ability to generate and manipulate light, was conceived by Marvel Comics during a failed project with Casablanca Records in which the record company would develop a real-life singer to star in a tie-in movie. The project never really got off the ground, and Marvel decided to go ahead with the character anyway. Since she was going to be a mutant, it was decided that she should be introduced in the pages of the X-Men.

Writer Chris Claremont does a good job with working the Dazzler into the flow of the Dark Phoenix story while making it pretty clear that the Dazzler really isn't a good fit for the team.

The Dazzler would later get her own comic-book series, which ran for five years. It is interesting to note that Dazzler No. 1, from March 1981, was the first comic that Marvel sold only through comic book specialty shops instead of newsstands and convenience stores.

I don't remember much about the series, as I thought a disco-singing superhero on roller skates was just too silly for me. Also, disco was dead and buried by the 1980s so the whole idea was kind of odd. But I understand the character has hung in there and is still kicking around the Marvel Universe, so what do I know?

The Emergence of Wolverine!

In the middle of the Dark Phoenix saga collected in this volume there comes a moment in the X-Men's fight against the Hellfire Club when all the heroes are captured. Except Wolverine, who has been cast into the sewer and presumed dead by drowning.

But the final panels of X-Men No. 132 show he has survived, culminating in a shot of Wolverine that has become iconic (reprinted here). In the following issue he attacks the Hellfire Club alone, creating enough havoc that the heroes break free and escape. The fight against the Hellfire Club has devastating consequences for Phoenix, as the following issues will bear out.

Wolverine had always been one of the more interesting X-Men, and after John Byrne took over as artist with issue No. 108 he had been growing more prominent. But it was with his solo fight against the Hellfire Club that the character really came into his own, and I remember thinking how cool he was in that issue. He has since gone on to become one of Marvel's most-popular superheroes.

It has long been part of comic-book lore that writer Chris Claremont and artist John Byrne didn't originally plan that Phoenix would meet such a final fate in X-Men No. 137. Instead, they wanted Jean Grey to become powerless, with the Dark Phoenix force suppressed within her.

Jim Shooter, the editor-in-chief of Marvel Comics at the time, objected, saying in a 1984 interview that since Dark Phoenix had destroyed an entire world letting Jean Grey go free would be like ''capturing Hitler alive and letting him go live on Long Island.'' Shooter insisted on the final book being rewritten to make the punishment fit the crime.

In 1984, Marvel published the original ending of the story in a one-shot comic called ''Phoenix: The Untold Story.'' I read it at the time and I must say I agree with Shooter: Claremont and Byrne's original ending just seemed a bit deflating compared to what ended up being published.

If you are interested in comparing the two you can buy ''Phoenix: The Untold Story'' on Amazon.

Jean Grey's Revival - The Avengers and The Fantastic Four

In 1986, after I had stopped reading comics on a regular basis, Marvel decided to revive Jean Grey in a story that absolved her of the actions of Dark Phoenix. The move, which took place in a two-part story in The Avengers and The Fantastic Four comics, was controversial, with some fans happy that the character had returned while others thought the move undercut the power of the Dark Phoenix Saga.

Count me as part of the crowd that thought reviving Jean Grey was a mistake.

This image is from the back cover of X:Men: The Dark Phoenix Saga.

What do you think? Should Jean Grey Have Been Revived?

Jean Grey first appeared as Phoenix in X-Men No. 101, and over the next seven issues writer Chris Claremont and artists Dave Cockrum and John Byrne first explored her powers. Those eight issues of the X-Men have been dubbed ''The Phoenix Saga.''

The Phoenix Saga is collected in Marvel Masterworks The X-Men Volume 2 (along with X-Men issues No. 109-110). I have written a separate review of this collection, so please check it out!

Marvel Masterworks X-Men Comic Book Review: Enter the Phoenix! Plus Wolverine, Storm and Nightcrawler!
This volume reprints Uncanny X-Men No. 101-110 in full color, a collection of 10 comics during a run that really established the new X-Men as a major franchise.

X-Men Comics on eBay! - For the true collector

If you are one of those fans that absolutely needs to collect each individual X-Men issue then eBay probably is your best bet at getting the best price. As always, before you bid please check the shipping & handling charges as well as the condition of the item so you won't be surprised! Good luck!

When the all-new X-Men debuted in the summer of 1975 the book combined several already-established superheroes with new characters that were very different and much more international. Phoenix joined a few issues later, giving the team more power than the original X-Men ever had.

Nightcrawler was my favorite of the X-Men at the time, in part because artist Dave Cockrum seemed to find such joy in showcasing all his acrobatic moves.

This image is the cover of Marvel Essential X-Men Volume 1.

Which X-Man Was Your Favorite?

When John Byrne was drawing the X-Men in the late 1970s it was very hard for the average comic-book fan to buy his original art. Now, thanks to eBay, pieces of artwork are available regularly.

As always, before you bid please check the shipping & handling charges as well as the condition of the item so you won't be surprised! Good luck!

Joe Kubert, Comic Book Artist: An Appreciation
Comic book artist Joe Kubert died on Aug. 12, 2012, after more than seven decades of drawing and creating comic books. Over those many years he worked on a w...

Gene Colan, Comic Book Artist: An Appreciation
Gene Colan developed such a moody, cinematic style during his six decades as a comic book artist that his work was as easily identified as the art of Jack Ki...

Thank you for visiting my lens. Now I'd really like to know what you think of the Dark Phoenix Saga, the X-Men, comic books or this lens. Here's you chance to share your thoughts!