Seafarer Mama/Karen has been writing since she was ten. She is a published author & finds inspiration from a variety of sources & settings.

Nobody gets out of this world alive, so we might as well stick together while we're here.

Laughter is the shortest distance between two people. - Victor Borge

We gravitate toward those with whom we can have a good laugh, toward those who give us some of their giggles when we do not have any left of our own. They have a direct effect on the amount of endorphins that surge through our brains, and replenish our supply when it has run low. This creates a series of events - a chain reaction, or a "butterfly effect" - whereby our disposition is lifted, which lifts up others we meet throughout our day. Because we feel good around those whom we associate with laughter, we want to be around them more because our hearts are lighter in their presence.

Parents of young children are familiar with the need to maintain a sense of humor with their little ones. There are many ways to entertain toddlers, and their laughter is contagious when we are successful. I know one dad in my co-housing neighborhood who has a talent for this. He is a clown at heart and often rolls his eyes or jumps over his two-year-old son, which keeps the boy in fits of giggles. Sometimes my own foibles and mistakes amuse my daughter, and I am willing to laugh at myself when she laughs at my imperfections.

Having a sense of humor about our children's unique way of solving problems also strengthens our bonds with them. The other day, my daughter put her shoes on before deciding that she wanted to leave our home by the back door. Because there was a white rug between her and the back door, and she did not want to take them off just to put them on again as soon as she stepped onto the back deck, she crawled to the back door on her hands, arms, knees and tummy. Her gesture both respected my wishes and solved a problem in a delightful way, and we both enjoyed a chuckle together.

No matter what the age of the people in a relationship, humor strengthens their bonds and keeps them coming back to each other for more. When we all have giggles to share, those giggles tend to multiply geometrically and hysteria prevails. Those events imprint themselves deeply in our memories, which become some of our favorite "roses in December."

The Element of Surprise in Humor

Having fun by engaging in play that involves using things in ways that they were not designed for (like a colander or a bowl as a hat), or changing roles (the parent behaves like the child and the child behaves like the parent) marks an openness to surprise and unpredictability, and laughter is a response to turning a situation on its side, if not totally upside down. When people do something that we do not expect them to do, this strikes our funny bone, and we often laugh.

"Magic" tricks often entertain children because the result of a "magician's" action is often mysterious and unpredictable to them: pulling a bunny out of a hat, putting a woman back together after apparently sawing her in half, or having quarters harvested from the back of their ears. Their response is often laughter that springs from the delight of witnessing an element in their world not working the way they expect it to.

One of my co-housing neighbors is a therapist who teaches and sees clients during the week. On one or two Saturday mornings a month, she is a clown at a local hospital. She knows that bringing laughter into the lives of those staying for a long visit at a hospital boosts their immune system and helps them heal faster. They keep hope that their present dependency on IVs and oral medications, and the constant presence of medical assistants in white coats and stethoscopes, shall pass and that they will eventually be free to return home to continue with their lives with their families and friends.

Links to laughter, the best medicine...

A friend of mine teaches clowning to her third and fourth graders after school. It is a skill that enhances preteens' and young adults' level of confidence and ability to solve problems. Clowning offers the chance to look at everyday life in a new way and find solutions for personal conflicts. It is a chance to experiment with unfamiliar behavior while not being themselves because they are in a clown's costume. It is also a chance to make a positive difference in others' lives through brightening their day. Clowning incorporates mime, theater, and storytelling without words. Those are good skills to develop for responding to various situations throughout our lives.

In the 21st century, the majority of adult humans are plugged into every device imaginable, and often fritter away hours in front of a screen. This habit kills brain cells. Laughter restores them. Hence, those who make us laugh also help heal our brains and restore wholeness to our lives. This could be a compelling reason to limit your time in front of a screen and seek out friends to laugh with. If there is nobody close by, walk to a local park; it is a great source of amusing anecdotal stories and delightful chance encounters. If you are lucky enough to live in a co-housing community, there are many opportunities to share laughs every day right outside your door.

Who among us can maintain a negative disposition in the face of laughter? Laughter wins in our everyday interactions because it is contagious. We begin to see the similarities between ourselves and others when we have the opportunity to laugh with them. Social activists who have traveled to war-torn countries have shared laughter as well as tears with the people they visit, and have brought back with them the sense that humans are all on the same side of a war - the side of peace and sharing life with loved ones instead of having to mourn their passing. Citizens of other nations want and need the same things we do - food, shelter, and family. People who have been oppressed have a good reason to bond over laughter and use it to disarm their oppressors. What can they do if they see a wall of humans marching arm-in-arm toward them, smiling and singing "We Shall Overcome"? Laughter promotes unity and such unity has the power to accomplish great things.

Global dignitaries might have a compelling reason to look laughter's power to connect when conducting meetings and gatherings between themselves and other world leaders. Taking apart conflicts and seeing them from more than one angle, then working creatively to solve them could lead them to the realization that there is a way for everyone to win. They might have a chance to laugh together at some crazy, far-fetched creative ideas in the process. This approach would save both financial resources, lives, and the future of our planet.

What would happen if all military personnel put down their weapons, shook the hands of those they are fighting, and toasted a long life of love and happiness to one another? What if they shared pictures of loved ones and funny stories over food with one another? They would walk away with many more friends than enemies, and the world will become smaller,...and much friendlier.

The next time someone frowns at you, smile back. The next time someone criticizes you, find a way to make a joke about yourself. You may end up sharing a laugh together. In the meantime, the following are a set of suggestions for getting warmed up for laughter in your everyday life. 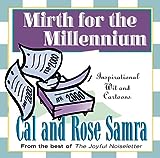 Mirth for the Millennium (The Holy Humor Series)
The frenetic pace of the 21st century can use laughter as an antidote to stress. Find out how sharing giggles can connect us and help us form and maintain authentic relationships.
Buy Now

Exercises for Inviting Laughter into the Day

1. Read a comic book. My favorites feature Calvin and Hobbes and Rose is Rose.

2. Look up a good joke and call a friend to tell it to her/him.

3. Sit on a park bench and observe people. Both the animals and other humans are a great source of entertainment.

5. Wear a piece of clothing inside out.

9. Try something new and find the humor in your mistakes.

Life is a Treasure Hunt!

When we look for reasons to laugh, we will find them. So, put on those rose-tinted glasses and start looking. My daughter loves to laugh for the sake of laughing, just because it feels good to do, and I often join her. I like to try laughing with a variety of "attitudes," which makes her laugh even harder.

Did I make you laugh?

Was there something in this hub that made you laugh?