You Have Everything To Fear

President Franklin Roosevelt said that "we have nothing to fear, but fear itself."  Since September 11, 2001, the Republican Party has done everything in its power to make sure that Americans have feared fear itself.  Right after 911, there was much to fear.  Nobody knew when and where the next attack would come.  President Bush told us that we had much to fear.  But the Republican Party has used the fears of Americans to put forward an agenda that has nothing do to with an actual threat, but rather to use the fear to paint a picture that suits their need.  Fear of Muslim extremists were used to go to war against Iraq.  Never mind the facts were not true and Iraq posed no threat to the United States, we were told it could happen and our fears allowed it.  Fear was used to promote anti-American tactics such as torture and wiretapping. The politics of fear became the Republican Party's greatest political strategy.

The politics of fear were defeated in the election of President Barack Obama.  They tried to paint President Obama as a Muslim, terrorist, unamerican, communist and the like. But it didn't work.  But now that President Obama is President, the Republican Party has amped up its fear mongering in an attempt to gain to huge victory in the November elections.  A simple look at a few issues shows that Republicans are again trying to use fear to gain political support and not to actually defend America from any actual threat.

For Those Who Say Its Because Its Ground Zero, Explain This

For the past weeks, Republicans have used a local zoning issue to promote their fear mongering in attempt to play on the fears of Americans regarding Islamic extremists because they believe if people are afraid of another 911 it will help them politically. There is a Muslim Imam who wants to build a Islamic Community Center near ground zero. Republicans such as Newt Gingrich and Sarah Palin have been on Fox News nonstop declaring that a Mosque at Ground Zero is horrible and some have even stated that this will become the next "Hamburg Cell" and a terrorist command and control center.

Some actual facts reveal the truth about the Republican Party's disingenuous attempt to help themselves politically. Gingrich has consistently claimed that the Imam in question is a radical Muslim cleric with ties to terrorists. If that is true, then President George Bush and Vice President Dick Cheney were conspiring with terrorists and should be tried to treason. The Imam is Feisal Abdul Rauf. Rauf is the Imam of a Mosque in New York City. He came under fire in 2004 for stating that American dealings in the middle east for one of the reasons that 911 happened. Funny, Glenn Beck has ranted and raved for these comments in recent weeks even though last year Glenn Beck said the same thing.

Anyway, on to Bush and Cheney. It is no secret that Bush and Cheney have a close personal relationship with the Bin Laden family, not including Osama. Bush and Cheney have a close relationship with many Muslim leaders, including Rauf. The Bush State Department worked with Rauf to preach Muslim American cooperation and peace after 911. Rauf traveled with Cheney around the Middle East to preach tolerance. But now that an election is coming up, never mind all that, he is Muslim and therefore a terrorist and allowing him to build on ground zero is an affront to decent people. Fear him, Fear him.

Oh, wait, ITS NOT PROPOSED TO BE BUILT ON GROUND ZERO!!! The proposed Mosque, which is actually a Islamic Community Center, is not being built on ground zero but actually several blocks away in what used to be a Burlington Coat Factory. I like a good coat as much as the next guy, but I would hardly call the Burlington Coat Factor hallowed ground. Plus, there oddly isn't any objection to the Mosque closer to ground zero already, built in 1970. By the way, this episode isn't isolated to New York City or the hallowed ground of ground zero, but is being waged all across the country, including a proposed Community Center in Temucula, California.

So why the outrage now?Because it is an election year and Republicans believe to win, they need people afraid of Muslims again. So they picked this issue to bring the fear. Fear mongering at its best.

The Republican/Conservative Fear Mongering doesn't stop at Ground Zero or even national security.  Republicans are intent in the next few months to use fear at every turn.  So the issue of Gay Marriage is front of center with conservatives trying to scare homophobes that homosexuals are out to molest their children (according to televisions ad I have seen in California).  Republicans are intent of making immigration a national issue and scare the country into believing that the guys standing outside Home Depot looking for a day's worth of work are going to kidnap your daughter and hold her for ransom (some of the argument in favor of the Arizona anti-Mexican law.)

And let us not forget the attacks on the President.  The old ones have come back for an encore:  He is not an American (as evidenced by the Republican argument that the 14th Amendment should be changed); he is a Muslim (trying to tie him to the New York community center); he is a socialist (all time favorite of conservatives.)

The point behind this campaign:  to play on the fears of white males, also known as undecideds.  Fear gays, Mexicans, Muslims, and the Not born American Muslim President.  Remember when Republicans tried to portray themselves as the party of inclusion.  It was a lie, but at least they tried.  Now they only promote fear.  The really sad thing:  it will probably work. 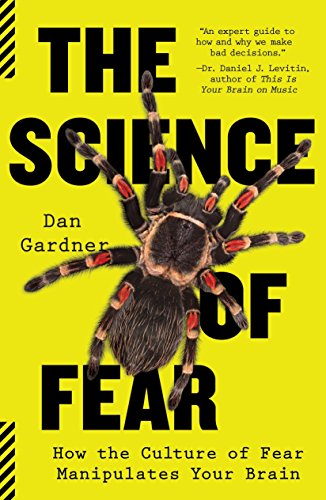 The Science of Fear: How the Culture of Fear Manipulates Your Brain
Buy Now