In search of love...

Everyday there are lots of new online dating websites popping up. One very common mistake people often make is assuming they are all about the same. Intellectually you know that can’t be true. Would anyone compare staying at Motel 6 to staying at The Ritz Carlton or Four Seasons Hotels by simply noting they all have beds and cable television? Do you believe a steak dinner at Denny’s is just as good as one at Ruth Chris Steakhouse or Morton’s Steakhouse? In a word, NO! (It should be noted many men make these same mistakes as well)

And yet when it comes to online dating sites lots of women and people in general don’t exercise “discriminating taste” when making a selection. You owe it to yourself to at least do a few google searches to view the best or top rated dating sites. Also be aware there are sites which cater to particular interests. Before you sign up with any site you have to ask yourself if I were my “Mr. Right” joining an online dating site which one would I choose?

Another big mistake is using a horrible profile photo! Examples include those who stand in front of a bathroom mirror holding a cell phone, pictures taken overhead with the subject looking up. (Attempting to hide body size), photos holding a dog, cat, or some other pet, photos showing your ex's hand resting on your shoulder even though you have cropped his face out, glamour shots, zany or stupid facial expressions, those taken standing next to your best friend (who may be more attractive than you). A profile photo is your “calling card” and the viewer's focus should be on you.

Lying about age, weight, career, and relationship status...etc Eventually the truth comes out! Now to be fair some of these websites make it easy to be evasive with such options as “I’d rather not say”, Relationship status listing “it’s complicated” or body type listing “a few pounds to lose”. If one has to be “discreet” they are involved with someone. Anyone with 30lbs to lose is kidding themselves by calling that a “few”. I’m certain if someone were hitting you on the head you wouldn’t consider 30 times to be a few.

Asking for the world!

"Don't expect to sit next to the moon unless you are a star!"

Too many people are (unrealistic) when it comes to their search for a mate. They create a long list of requirements/traits that even they don’t possess themselves. It’s just as important to illustrate what makes YOU special. Like attracts like.

Others take the opposite approach and list everything they DON’T want. (No players, no liars, no cheaters, no games…etc) Without realizing it they are announcing to the world that’s who they have chosen in past relationships. It also comes across as if you are negative, bitter, or have a chip on your shoulder.

Does anyone really believe a “player” who is attracted to you is not going to contact you simply because you said you don’t want to deal with players?

It should go without saying if a trait is not on your “list of wants” then it’s not something you desire. Focusing on the negative is never attractive.

Another very common mistake is exchanging personal contact information and setting up dates too quickly. One of the great things about online dating websites is you can get a feel for someone by how well they communicate with you through the site. You can use the online service’s Instant Messaging to chat as well as email one another through the site. If a man starts to rush you into meeting with him more often than not it’s because he is afraid he may expose some character flaw which might deter you. Some women are afraid of becoming too “emotionally invested” with someone they have yet to meet. Therefore this forces them to hurry with exchanging personal contact information and meeting a guy too quickly. Hopefully you are communicating with multiple prospects and evaluating your options based upon the responses you get to questions you ask, sense of humor, and things you have in common. You are responsible for your choices.

Pushing for "Exclusive Status" Too Fast

I'm looking for a “serious relationship”, "marriage minded" or a "god fearing man”...etc. Lots of women are in such a hurry to (tie down a relationship) with someone they barely know! The whole purpose of casual dating is to determine if this person is someone you want to have a “serious” or "exclusive relationship" with. Casual dating does not mean having sex with every person you have dinner with. It means taking things one-step at a time and allowing them to unfold naturally. Dating is an “exploratory” process.

Jumping into a (one on one) dating situation right off the bat is like job hunting by sending out (one resume at a time) waiting to see if that company will interview you and eventually hire you BEFORE you send out another resume to a different company. Realistically you can't determine if he or she is "the one" until after you get to know them and that takes time. Be yourself and encourage him to do the same.

No one goes to a buffet breakfast/dinner and stops only at the first station for their meal. The vast majority of us walk around and check out all the stations before we decide. Every "serious relationship" I have ever had began "casually" and evolved into something serious.

It's also a mistake to automatically assume that just because someone has gone out with you a couple of times they should take down their profile. Unless you have agreed to be exclusive you both should keep your options open. Trying to skip the “dating process” in order to get married can lead to regret. Dating is not a waste of time. Being married to the wrong person is. 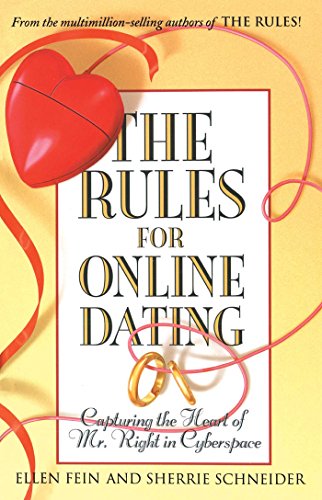 The Rules for Online Dating: Capturing the Heart of Mr. Right in Cyberspace
Buy Now