If you're looking for Tarot Cards Decks that have a Goddess theme, then you've come to the right place. In this hub, you'll see a number of Goddess-themed Tarot decks as well as some information on these decks, among other things.

You'll be seeing a lot about Tarot Cards in this hub since it is discussing the Goddess theme in Tarot Cards. If you're new to Tarot Cards and would like to find out more about it, you can look at this hub that talks about what the very basics of Tarot Cards for beginners are.

Rest assured that you won't be overwhelmed with too much information because the above hub will only cover the very basics that will help you get started on learning more about Tarot Cards. You'll also be learning about what kinds of decks you should buy if you're just a beginner to Tarot Cards.

If you like a deck and you feel that it resonates with you or you just like the artwork or for whatever reason you might have, no matter what theme it has (because Tarot Cards seem to have a million and one plus themes), then, by all means, acquire it for yourself.

Goddesses and themes on Goddesses

Do a search on Goddesses and you'll find a whole lot of results. And that's perfectly understandable because there a great many different kinds of Goddesses out there from all over the world.

In a single mythology, it's already a given that you'll find more than one Goddess. And these Goddesses govern or preside over many different things.

Let's take Greek Mythology as an example. There are a lot of Greek Goddesses. We have Artemis who is the Greek Goddess of the Hunt but who is also associated with the Moon.

The Queen of Pentacles

The Earth is also associated with Goddesses as can be seen in the many different kinds of Earth Goddesses out there such as Gaia from Greek Mythology and Terra from Roman Mythology.

Goddesses play a large part in many mythologies. We hear of many stories about all of these Goddesses such as in the story of the Iliad, the Odyssey and the Aeneid, which feature Goddesses alongside the many other characters.

There are also many artworks about these Goddesses such as in the forms of paintings and statues.

We have such famous and well-known artworks like the statues called the "Venus de Milo" and the "Diana of Versailles", both of which are displayed in the Louvre Museum in Paris, France.

Goddesses are associated with many things but of course the most notable associations are the ones pertaining to womanhood and femininity.

Goddesses are also associated with such things as the moon and nature, hence the many Moon and Nature Goddesses out there

Since there are so many different kinds of Goddesses out there, there are a lot of them that can be used as images on Tarot Cards decks that have a theme centered on Goddesses. These Goddess-themed cards would aim to celebrate womanhood and show that women aren't inferior to men and that they can also be powerful.

So you've decided that you would like to acquire some Tarot Cards decks with the Goddess theme. Now the question is where you can find these kinds of decks.

If you search around, you can find a lot of great pictures and images of these Goddess-themed Tarot Cards.

But if you're looking to get a Goddess-themed deck for yourself, then you have a lot more things to consider before just randomly choosing a site where you can purchase these decks. Why is that?

One of the main reasons for this is, of course, you want to avoid having any problems with your purchase.

Ideally, what should happen is you place an order for your chosen deck, you pay and then you soon get your ordered deck and there aren't any problems or complications.

You wouldn't want to get scammed or have a hard time contacting customer support if there's something wrong with your purchase.

And this is why it's much better to choose a trusted site to buy things if you're going the online shopping route. An example of a trusted site is Amazon.com.

This is a very well-known site with practically millions of people shopping from said site. You hear stories of people having good experiences with Amazon.com.

And, even if there is a problem, Amazon.com does have customer service so you can make use of it to settle any problems.

Furthermore, Amazon.com does have a number of great Tarot Cards decks with the Goddess theme. Here are some of what appears to be the best decks.

This product includes both the guidebook and the Tarot Cards deck, which can definitely be seen as a bargain.

After all, if you only get the deck, then you're missing out on what the cards mean and all other information that is contained within the book.

On the other hand, if you only get the book, then you can't practice and make use of whatever you learned in the book because you don't have the Tarot Cards that go with it.

The Mythical Goddess Tarot Cards has lovely artwork and designs. The cards have a lot of vibrant colors that really seem to bring the deck to life.

Of course, since this is a Goddess-themed deck, you can expect to see a lot of women in the cards.

In some cards, like the Earth Crone Ascension card, it's only a face that you can see and not the full person but the face is clearly that of a woman.

In other cards, like the Morgan le Fay I Sorceress card and the Kuan Yin III Empress card, you can clearly see the full image of a woman and not just a head. The guidebook that comes with this deck has 128 pages that is in full color.

Do you like Tarot Cards decks with a Goddess theme?

As a note: if you check out this product in Amazon.com, you can see many more images of the item in question, specifically how the Tarot Cards look like. They're customer images though and that's why you can't see them in this hub (because I'm not sure if we can use those images).

There are 78 cards in this deck. Lo Scarabeo is a well-known publisher of Tarot Cards decks so you can be sure that the Universal Goddess deck by Scarabeo is of high quality with excellent artwork designs.

This deck has lovely art with a variety of different colors that make it look vibrant and stunning. Since this is a deck with a Goddess theme, you can see that many of the cards are depicted by women figures. 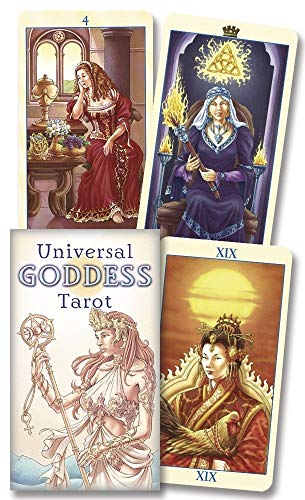 Universal Goddess Tarot (English and Spanish Edition)
We have Goddesses from around the world that make up the figures in these cards. Examples include Frigg, the Norse Goddess, and Demeter, the Greek Goddess.
Buy Now

If you observe the artwork of these Tarot Cards, you will note that the Goddesses in the images all look different from each other. These Goddesses seem to reflect and represent the mythology from which they came from.

It's clear that there are a lot of nuances and much depth to this deck. And it really shows the many faces of women and Goddesses from around the world.

As a note: if you want to see some sample images from this deck, you can see some from aeclectic.net since Amazon.com does not have any more sample images aside from the one featured here.

The items featured below are actually the same. They're all the Goddess Tarot Cards deck made by Kris Waldherr.

However, the third item featured on the right is actually an application for Android phone and tablet users.

Let's start with the first two items on the right. They're the same except one is apparently newer, The second item on the right has more images but those are customer images so if you want to see them, just head on over to Amazon.com. 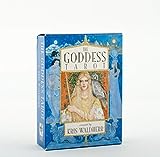 If you want to see even more sample images of the cards, you can also check at aeclectic.net, which has more cards that are different from the ones featured at Amazon.com

This tarot deck has 78 cards. The artwork design is very different from the previously-discussed Tarot decks (numbers 1 and 2 above).

But this doesn't mean the artwork is bad. The design has its own unique look and beautiful colors that can appeal to many people. Many of the cards depict women figures. We have Goddesses like Isis and Venus featured in the Tarot Cards.

But some of the cards, like the Ten of Cups and the Ace of Staves, do not have images of women on them. For instance, in the case of the Ten of Cups card, you can just see 10 cups and a rainbow.

Now, for the third item on the right, as aforementioned, it is an application for Android users. People that have Android phones and tablets can purchase this application, which allows them to do Tarot Card readings straight from their Android device.

A short quiz on Goddesses

All these different Goddess-themed Tarot Cards decks from Amazon.com are great decks to have.

Each of them have their own unique look and style, which appeal to many people. If you're a Tarot Cards collector, then you should consider adding these decks to your collection.

If you're a beginner to Tarot Cards, who says you can't have any of these cards as your deck? If you find that one of these decks resonate with you, then, by all means, acquire it and make use of it.

Here are some more hubs on Tarot Cards that might interest you: